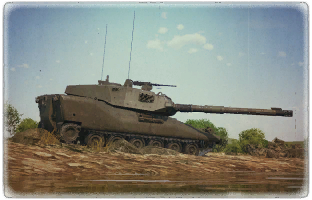 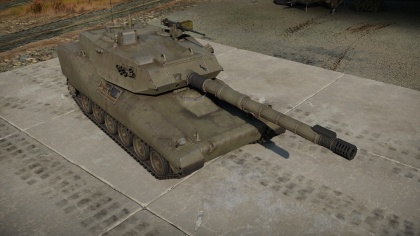 The Vickers/FMC VFM5 is a rank VI British light tank with a battle rating of 9.0 (AB/RB/SB). It was introduced in Update "New Power".

The VFM 5, also known as Vickers Mk.5, was a light tank built by Vickers. It was based on the hull of the American Close Combat Vehicle Light (CCV-L), which was built by VFM, but with a new turret and main armament. It was primarily designed for export.

The CCV-L was first revealed by FMC at AUSA in October 1985. Vickers Defense Systems and FMC formed a cooperative agreement later that year  to design an export version of the tank. It had been designed as a cheaper version of the CCV-L, and it was designated as the VFM 5. After the prototype was completed in 1986, it was displayed at the British Army Equipment Exhibition of the same year. No production orders were received.

The hull was nearly unmodified from the CCV-L, made of welded aluminum armor with applique steel armor available for the front and sides.

The layout of the VFM 5 was conventional. The driver was located in the front, the fighting compartment in the center, and the engine compartment at the rear.

The driver sat in the center of the front of the hull. His seat was adjustable, with a folding backrest to allow access to the fighting compartment. His hatch was opened by use of hinges on the rear, and it had five periscopes for viewing to the front and sides. When necessary, the center, forward facing periscope could be replaced with a passive periscope for night operations.

The turret is different from that of the CCV-L. The turret had a crew of three, and it was constructed in the same way as the hull, with welded aluminum armor and applique steel plates. The turret was mounted on a high-accuracy low-friction turret ring that is tilted down 3° at the front.

The main armament of the VMF 5 was a 105 mm Low Recoil Force gun, fitted with an integral muzzle break and a rigid thermal sleeve. 41 rounds of 105 mm ammunition were carried. 22 rounds were stored in the front of the hull, 11 on each side of the driver. 19 rounds were stored in the fighting compartment, located below the turret ring. Unlike the CCV-L, the VFM 5 features a loader, rather than an automatic loading system.

A bank of six smoke grenade launchers was located on each side of the turret, for a total of twelve smoke or fragmentation grenades. They were fired electronically by the bank's commander from the interior.

The gunner's primary sight was a NANOQUEST telescopic sight with a zoom of x10. It incorporated a laser rangefinder and muzzle reference system. The gunner also had a NANOQUEST periscope for wide-angle observation. A thermal imaging system was available as an option.

The commander had a rear-opening, single piece hatch with fiver periscopes. He also had a Pilkington PE/Raven II day/night sight with magnification of x1 and x8, as well as image intensification for night operations.

The loader also had a single piece, rear-opening hatch with a single AFV No 3 Mk 1 periscope with 360° of rotation.

The suspension of the VFM 5 is a torsion bar type. There are six road wheels on each side of the chassis and a shock absorber at each road wheel. 38 cm double-pin tracks are used.

The engine is a General Motors (GM) Detroit Diesel Model 6V-92 TA 6-cylinder, producing 550 horsepower. A General Electric (GE) HMPT-500-3 transmission is used, with three forward gears and one reverse gear. The powerpack is cooled by a water radiator and oil cooler. Easy access to the engine is provided by a rear hull ramp, which the engine can be slid down for maintenance or replacement. Access covers are located on the engine compartment roof for easy maintenance as well.

The engine compartment is protected by an automatic fire-suppression system, and one can also be fitted for the crew compartment. Handheld extinguishers are also provided.

In 1985, Vickers formed a consortium with the American FMC company in order to develop a modern, yet cost-effective light tank for the export market. To achieve this, development and production costs had to be kept as low as possible. As a result, the decision was made to combine the CCVL hull developed by FMC for the US Army’s AGS project with a Vickers-built turret, housing a modified low-recoil version of the widely used L7 cannon.

The first prototype was built in 1986 and subsequently revealed to the public at the British Army Equipment Exhibition that year. However, despite its modern equipment, excellent mobility and low weight thanks to the wide use of aluminum alloys, the VFM 5 failed to attract any attention from potential international operators at first.

However, testing and further refinement of the vehicle’s design continued into the late 1980’s and early 1990’s, just at that time negotiations were held with Malaysia to supply the tank to the national armed forces, but it ultimately never came to a production agreement. In the end, only a single prototype of the VFM 5 was ever constructed.