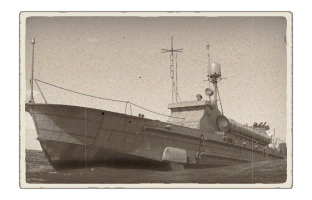 This boat has no armour, and relies upon small size and fast speed for survival. Turning away after dropping torpedoes and hiding behind smoke should be standard tactics.

The Pr 123K (A-11) is the fastest boat in the game - getting to 135/136kph in Arcade Battles. This makes it very useful for caping zones that are some distance from the main battle area.

The vessel loses a lot of speed when making anything more than minimal turns, like all hydrofoils. However it has very good acceleration, allowing sharp turns to be a normal part of your tactics.

The Pr. 123K has dual KPVT (14.5mm) machine guns mounted at the stern, giving a very wide angle of fire excluding a relatively small angle either side of straight ahead..

The Pr. 123bis carries two 450 mm wet-heating 45-36NU torpedoes. They have a range of 3 km at a speed of 78 km/h or a range of 6 km at 73 km/h with the Torpedo Mode module installed. They are placed at the bow of the boat and fired out at the same speed the boat is already travelling at.

In AB this vessel is best used to cap zones that are some distance from the main action areas. This is best done at the start of the battle, or towards the end, in either case when there are likely to be fewer enemy vessels near those zones.

The vessel is also an adequate PT boat for its BR, and its high speed allows it to hide behind terrain (islands, peninsulas) in ambush and to reload torpedoes (in AB)