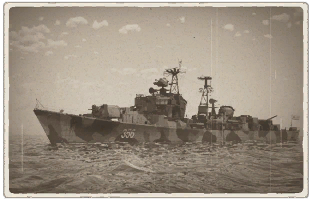 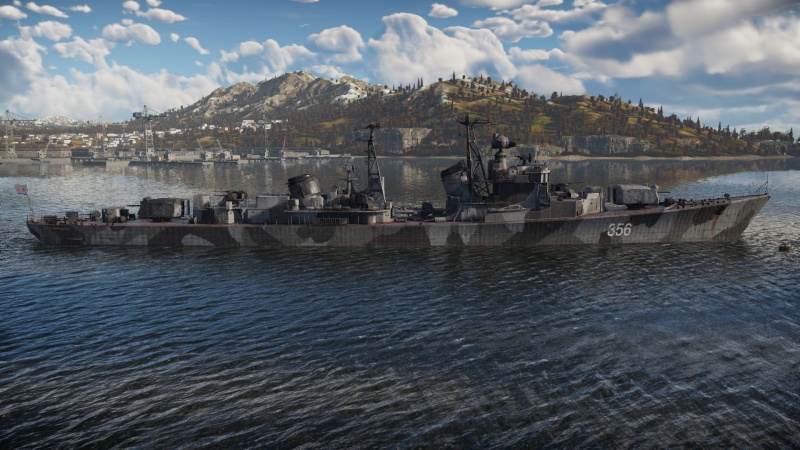 The Blagorodnyy belongs to the Project 56 Spokoiny-class destroyer and is upgraded to the PLO version with enhanced anti-submarine weaponry. The 130 mm turrets and quad 45 mm autocannons will make sure it can make short work of enemies PT boats, destroyers or sometimes even light cruisers at lower tier thanks to its devastating firepower.

The design of Project 56 destroyers are identical: in Blagorodnyy's case, it is the "PLO" ASW variant of the family. Both the hull and superstructure are made of steel at 16 mm and 4 mm respectively. While it is sufficient to stop lower calibre autocannons without any AP shell, the secondary cannons of ships at this BR will very like penetrate the hull, even HE shells. Like most destroyers at its rank, the ammo storage is right below the turrets and both 130 mm and 45 mm ammunition stored closely, the abundance of ammo will very likely result in a detonation or total destruction if either one is ignited.

In case of extra protection, parts of the ship are covered mostly by anti-shrapnel armour of 10 mm thickness by the funnel, torpedo control room, face of SM-20-ZIF, etc., with some area at higher or lower thickness. While this is nowhere sufficient from direct hits, it can at least save the ship from shrapnel of near-misses.

Thanks to the 4 GTZA TV-8 steam turbine engines onboard, the Blagorodnyy can push up to 72 km/h (38.9 kn). The speed itself is very sufficient for it to leave the heated combat zone or flanking enemies with relative ease.

A common feature of Soviet destroyers is their 130 mm turrets. In Blagorodnyy's case, it is armed with 2 x SM-2-1 130 mm dual mount on the front and rear of the hull. Thanks to the advancement of technology, it has a faster traverse speed than the B-2LM mounts of previous destroyers and let alone the single B-13 mounts. The new SAP and HE-VT shell also prove its capability to take down enemy vessels up to light cruisers given the shots does extensive damage against their internal modules. The 130 mm SM-2-1 turrets are equipped with ZF-42R HE-VT shells, the sheer calibre of the gun is more than enough to scare off enemies' planes even at longer ranges or higher altitude thanks to its anti-aircraft radar onboard with leading indicator. If any aircraft comes within its explosion radius, it is very unlikely that it can survive the salvoes.

Most destroyers at this rank have extensive medium calibre anti-aircraft firepower against incoming planes and the Blagorodnyy is among the very last gun destroyers of Soviet Navy. The 4 x quad mount 45 mm SM-20-ZIF mount onboard have an extremely devastating firepower against planes or coastal ships within their range.

Aside from 45 mm quad mount autocannons onboard, the Blagorodnyy also sports 2 x twin mount 2M-3 25 mm autocannons. Like the other type of autocannon onboard, any aircraft and coastal ship will have a very bad day when being strafed a few seconds by it.

The base model Project 56 didn't have sufficient deterrence against submarines. With the Blagorodnyy's PLO upgrade, a pair of RBU-2500 depth charges respectively at the front and a pair of RBU-36U at the rear were added. While there aren't submarines in-game currently, the explosive content of those rockets can take out PT boats or fast attack boats right away, alternatively set enemy vessels ablaze or knock-out their critical modules.

The other weaponry on-board are its quintuple 533 mm 53-57 torpedo launchers located by the middle of the ship. They inflict sufficient damage against careless targets, but remember to set torpedo depth for maximum damage.