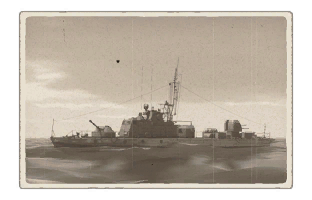 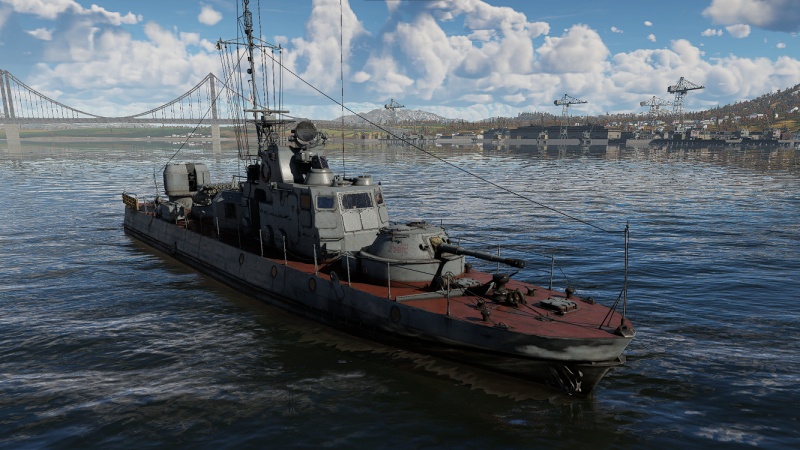 The Pr.1204 late modification is a rank III Soviet armoured gun boat with a battle rating of 2.7 (AB/RB/SB). It was introduced during Update 1.79 "Project X" when the Soviet fleet was implemented into the game. It bears strong resemblance to the Pr.1124 (1940), and inherits its main gun and its tactics.

The turret is the most heavily armoured section of the ship, with 15 mm of RHA, meaning that it cannot be knocked out by HE shells under 100 mm in calibre. In addition, the bridge and Automatic Grenade Launchers are protected by a thin layer of hardened armour, making them more resistant against low-calibre HE. However, this armour is insufficient to stop large-calibre autocannon fire or armour-piercing machine gun rounds.

In addition, there is an armoured compartment protecting the engine. This gives some resistance against engine knockouts, which will help the stock grind (before FPE).

The primary armament is roughly the same as the Pr. 1124, and offers no new shell types. It is conveniently mounted on the bow of the boat, with a blind spot directly behind the boat. Being moderately armoured, it is rarely knocked out. HE shells are sufficient against most boats, but it is sensible to carry some APHE as well, especially to face some Russian armoured boats, where your 11 mm of penetration with HE rounds won't be enough.

Use HE whenever possible, especially at longer ranges, because the APHE needs a solid hit to damage anything.

The dual 25 mm turret tears aircraft apart in a few hits, and it can help against very fast PT boats. A small group of these boats together with a destroyer have a decent combined AA.

The "anti-air" armament of 4 x 30 mm grenade launchers is largely ineffective at ranges of over 1 km. It is useful, however, in close quarters fighting (though not recommended), or for fending off patrol boats that get too close, something that is very challenging with only the main gun. This is a major improvement over the Pr. 1124, which had to use its 12.7 mm machine guns for this, leaving it vulnerable to the air.

Note that the grenade launchers are classified as AA, but the true AA is your 25 mm gun, which you can use against pretty much anything.

Note: this artillery rocket launcher has a larger calibre than others in the tech tree. This allows you to fire up to 17 rockets 3 km away, very effective against destroyers.

You also have the option to carry a few mines. These mines are very small, and were designed to be used in rivers. Using them against destroyers has very little effect, even several of them. These should be used against other PT boats, but are not really worth the trouble.

The Pr. 1204 late is very similar in playstyle to the Pr.1124 (1940), which you will have played before this boat. Remaining at long range is still important due to your thin armour, however more ships have guns capable of engaging at range at the higher BR. You have better defence against fast and evasive enemies and air power thanks to your 25 mm AA gun and the 30 mm grenade launchers, but these can be easily overwhelmed by large numbers of enemies. You are also still relatively flammable, and going into close-quarters battle is not recommended.

The Pr.1204 (or "Shmel") class of river boats were developed in the mid 1960s as a successor to the USSR's ageing fleet of WWII era river boats. 118 Shmel class river boats were built between 1967 and 1974. The boats were designed specifically to operate in shallow waters, such as rivers or littoral waters. The Shmel class was designed to support operations in rivers or shallow water conditions such as denying waterway passages, protecting harbours supporting troop movements, as well as providing fire support for ship to shore scenarios. As of 2017, several are still in service with the Russian Navy, with at least 4 assigned to the Caspian fleet.[1]