Difference between revisions of "F-84G-26-RE (France)" 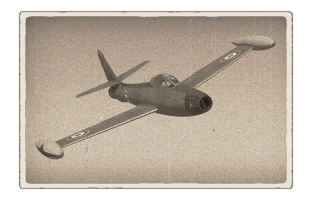 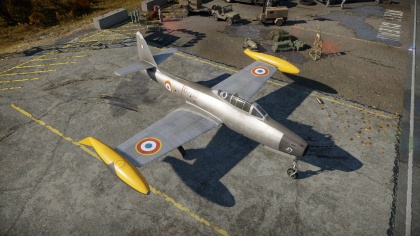 The F-84G is a fighter-bomber. It's very capable at fighting enemy aircraft while also an excellent CAS (close air support) for the French ground forces. In Air Realistic battles, the F-84G-26-RE should be used for Boom and Zoom.

The six machine guns are arranged two groups, four mounted in the nose of the aircraft and the other two located with one near each wing root. Each is armed with the same amount of ammunition, which means that all guns will fire with each other until empty.

The F-84G-26-RE (France) can be outfitted with the following ordinance:

The F-84G-21-RE should be played as an aggressive BnZ plane, especially at the occasions where you get an airspawn. Meaning that as soon as you spawn in it, you turn to the direction of the enemy airfield to rush and reach 850+ km/h. Engage those who are climbing, there is also a chance of catching a few afk climbers too. After climbing to engage a climber, don't turn back to them if they evade. Continue zoom climbing, do a vertical loop and maintain level flight to gain a little bit more speed. After that, the only way you're supposed to fly against enemies is by diving, engaging, zooming up, vertical loop then rinse and repeat.

The F-84G's acceleration is one of the best at 7.7. It has a very good climb rate. It has got 6 x 12.7mm M3 machine guns with 1800 rounds of ammunition which is plenty. Turn rate is poor, avoid turn fighting in it. Roll rate is average without New Boosters, good with New Boosters.