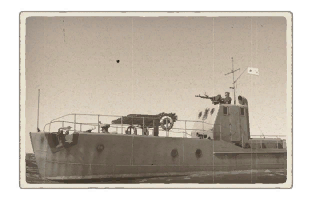 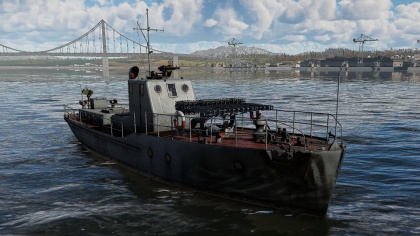 The Ya-5M is a gift rank I Soviet motor gun boat with a battle rating of 1.3 (AB/RB/SB). It was introduced during Update 1.83 "Masters of the Sea" as a reward during War Thunder's 6th anniversary. Also, Ya-5M was a one of gifts on War Thunder's 7th anniversary[1].

The primary armament of the Ya-5M consists of two 12.7mm DSHK machine guns (the first turret mounted above the wheelhouse and the second in an aft pintle). These guns are known for their fast fire rate and decent armour penetration at their rank, on the YA-5M however, one must turn the ship slightly broadside to enable the usage of both guns at once, this can present a problem while aiming the rockets.

APIT belts are suggested as they contain both HE and AP mixed to maximize damage output against all possible targets.

The Ya-5M comes armed with 24 M-8 rockets and one full reload. These rockets are decent area-denial light artillery weapons, but suffer from terrible accuracy beyond 100 meters due to conditions at sea. It is suggested to fire these rockets in 4-5 burst salvos to offset the lack of precision.