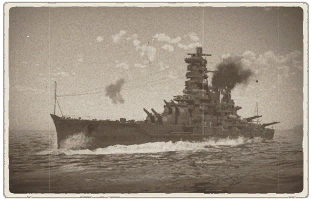 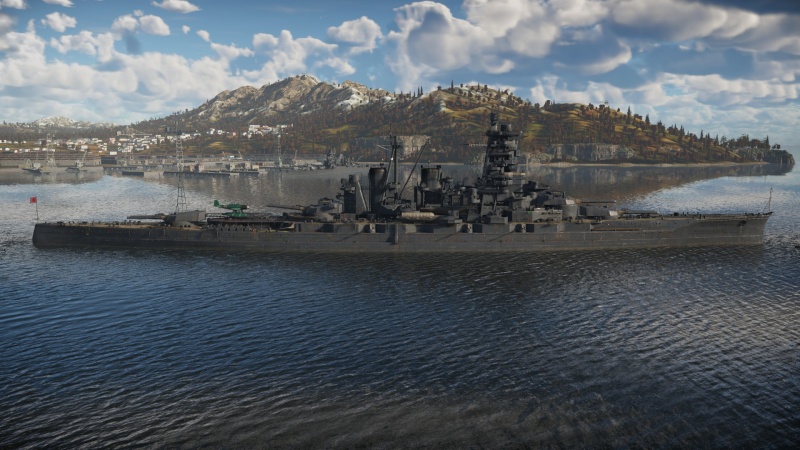 The Kongo-class, IJN Kongo, 1944 (金剛, namesake: Mount Kongō) is a rank V Japanese battleship with a battle rating of 7.0 (AB/RB/SB). It was introduced in Update "Wind of Change".

The Kongō was the lead ship of the Kongō-class and would be the last Japanese capital ship built outside Japan. Designed by the British naval engineer George Thurston and laid down in 1911 initially as a battlecruiser she would see 2 major refits that would reclassify her as a fast battleship.

First commissioned in 1913, patrolling the Chinese coast during WWI, she would see many major naval actions in the Pacific War until November 1944 when she would sink while in transit by a submarine.

Kongo's armour truly reflects her legacy as a battlecruiser, even though she has been uparmoured from her original design. Her 203 mm main belt is the second weakest capital ship belt in the game - only HMS Invincible's 152 mm belt is worse, and it's enough to stop cruiser shells, but will stand no chance against battleships. The rest of her amidships hull is protected by 152 mm armour, which greatly improves her survivability against splash damage and weaker shells, but is not very effective against enemy AP. Her bow has a 76 mm belt that extends from the waterline, but as with most battleships, the majority of the bow is left unarmoured. Her turrets have 254 mm of armour, while her barbettes have 229 mm. This is reasonable by battleship standards, but still leaves her turrets vulnerable to even cruiser AP. Her conning tower, nestled behind turret B, is surrounded by 254 mm of armour.

Within the ship, all four magazines are protected by a turtleback armour scheme, which greatly improves her protection against ammunition detonations, especially at close range. In addition to this, the steering at the stern of the ship is armoured by an enormous concrete block.

Overall, her armour is certainly enough to give her protection against most cruisers and some battleships, especially when angled, but given her design and playstyle, it will never be her strength. At the end of the day, she is a battlecruiser at her core, and you should not expect her armour to make you impervious to battleship fire.

The IJN Kongo's crew consists of 1,437 personnel, which is respectable. It is far more than any World War One-era dreadnought, although it's less than the Scharnhorst's complement, and is smaller than the crews of even some World War Two cruisers.

The Kongo's nature as a battlecruiser reflects in her speed, which is a very good 56 km/h. This is only slightly less than most cruisers, and is leaps and bounds ahead of the speed of dreadnoughts. However, her acceleration and deceleration is still unexceptional, and her turning is not very good.

The 36 cm/45 Type 41, also seen on IJN Hyuga, is an exceptional 14-inch battleship cannon. Compared to the Hyuga, the IJN Kongo gets only 8 guns, but she features a new selection of shells. Her stock shell, Ordinary SAP, is identical to the shell on Hyuga, and certainly gets the job done. With the equivalent of 68.64 kg of TNT, her SAP is still a head and shoulders over even the HE on most other battleships. These shells will smash cruisers whenever they hit, and against battleships, while they will rarely penetrate the hull armour, the splash damage from the detonation will frequently destroy guns and turrets. Type 91 APC is an improvement over the Hyuga's equivalent AP shell, with extra penetration. This shell is mostly used against battleships, where the extra penetration is needed to penetrate the belt armour. The last shell is Type 0 Common, an HE shell. This shell is very poor, possessing only half the explosive filler of SAP. It may find some utility when it comes to sniping patrol boats or stray floatplanes, but overall, it isn't very good.

The Kongo's secondaries consist of eight 15 cm/50 Type 41 cannons, four per side. Comparable guns can be found on the IJN Agano, although these guns can maintain a sustained rate of fire of 10 RPM. While they are 6-inch secondaries, they are nothing to write home about, as the best shell only has 81 mm of penetration at point blank range. That being said, the exceptionally high explosive mass of the SAP round - nearly as good as HE - makes it very well suited for fighting destroyers.

The IJN Kongo's AA armament sets her apart from other battleships. It includes six 5 inch/40 Type 89 twin cannons, as well as a total of 100 25 mm cannons. The 5" guns, which behave more like secondaries, are automatically loaded with HE-VT, with no alternate ammunition choice, which makes them pretty useless against surface targets, as the shells will always detonate early, but decent against aircraft. Meanwhile, the 25 mm cannons provide the Kongo with exceptional close-range AA firepower, being able to put up a hail of fire in any direction. However, note the stopping power of the 25 mm is not very good, and these cannons are only really suitable for self-defence.

Located between the aft main turrets is a deck area and catapult for one Aichi E13A1 scout plane which provides unique offensive and defensive abilities, expanding tactical options. Ship-launched scout planes fly just like regular tree units but lack munition choices and cockpit views. The E13A1 is equipped with a 7.7 mm Type 97 defensive machine gun and a formidable load of 4 x 60 kg bombs. It also has the scout plane ability to cap zones and lay down smoke cover (up to 3 times). Captains will be wise to remember to utilize the aircraft and consider when best to use it, for example to cap a point early or late in the match, to create a smoke screen to stymie enemy bombardment and repair, to attack enemy units directly, or perhaps something completely new! Carrying a heavier bomb load than most other scout planes, this unit has a very good chance to sink enemy boats or even a destroyer.

Aside from perhaps the Scharnhorst, there is no better ship when it comes to aggressive capital ship gameplay. While the IJN Kongo has the ability to snipe passively, the Hyuga simply is more specialized in that role over the Kongo. It is best to lean into the IJN Kongo's advantages, and play like the battlecruiser that she was originally designed as. Her speed allows her to keep pace with friendly cruisers, while her exceptional gun arcs on the rear turrets (±150°) allow her to make the most of her somewhat lacklustre armour, as well as maintaining the ability to deliver full broadsides while sailing into combat. In addition, her AA is an extremely useful asset, as it allows her to be self-sufficient in combat, instead of relying on teammates for AA support.

Overall, the Kongo is the most efficient ship in the game when it comes to delivering devastating firepower to the enemy. Don't sit passively - put your ship on the line and don't be too afraid to engage in brawls, despite her light protection. While she isn't exactly a very well protected capital ship, her armour is good enough to let her speed and firepower do the rest.

After the Royal Navy commissioned the battlecruiser HMS Invincible into service in 1908, the IJN was quick to react with a plan to expand its fighting force with modern warships being approved already by the end of the decade. However, the problem persisted that Japanese shipyards simply lacked the technological know-how to build such warships at the time. As a result, taking advantage of the existing naval cooperation agreement with Great Britain, Japan sought assistance from the Vickers company, who besides helping design a matching warship, also agreed to manufacture the lead ship, to be named Kongō, while the remaining ones would be built in Japan.

IJN Kongō was laid down in January 1911 as the lead ship of its class of modern battlecruisers to be built for the Imperial Japanese Navy. It was launched in May 1912 and completed in April 1913, subsequently entering service in August as the most advanced Japanese warship of its time. During WWI, IJN Kongō took part in minor operations but was quickly placed in reserve after the conflict. With international agreements limiting naval power after WWI, Japan was forced to upgrade existing warships in order to maintain its fighting power. As a result, Kongō was extensively upgraded on two occasions in the interwar period, not only vastly improving its characteristics but also noticeably changing its visual appearance.

During WWII however, Kongō had a rather illustrious service record. It took part in several major operations, including the Invasion of the Dutch East Indies, the Battle of Midway and also supported Japanese forces at Guadalcanal. After taking part in the famous Battle of Leyte Gulf, Kongō would serve until November 1944 when it was sunk by a successful torpedo attack by the American submarine USS Sealion.