Difference between revisions of "IJN Ayanami" 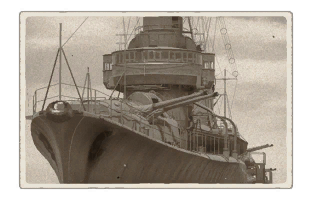 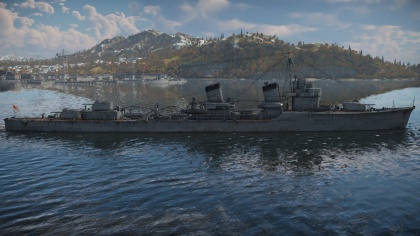 Overall it's a capable, well-rounded destroyer, trading secondary/anti-aircraft armament of most other destroyers for a better torpedo armament.

She has a 23 mm of steel armour on her hull, 8 mm on her superstructure, and 3 mm over her main firing tower, which is average for a destroyer in the same BR. Her guns carry 3.175 mm of anti-fragmentation armour that, unlike in other destroyers of the same BR, provides protection from all sides. She has 197 crew, which is average when compared with equivalents.

The Type 3 127 mm gun found on the Fubuki in three twin mounts is the 'B' model Type 3. They are located in the front and rear of the vessel: one in the front, two in the rear and the rear guns are super-firing. It has HE and HE-DF shells available to it. Overall Type 3 shell speed of 910 m/s is the second-best among comparable destroyers, exceeded only by a modern Albatros-Klasse (143), firing shells at 914 to 925 m/s (depending on the type). She has a 7.5s (8 rounds/min) reload speed with a stock crew and a 5.5s (11 rounds/min) reload speed with a fully aced crew, what is one of the lowest firing rates among comparable destroyers, compensating it with a large number of shells fired in a broadside.

The HE-DF is delayed fuze ammunition, should be used only to engage enemy aircraft at a distance, supplementing relatively weak secondary armament. While hitting a small target is certainly a difficult challenge, it's much easier than on the predeceasing Mutsuki due to notably higher shell travel speed significantly better vertical guidance (+75° vs +33° on Mutsuki) and a higher targetting speed (5.1°/s horizontal and a whopping 23°/s vertical).

The secondary weaponry on the Fubuki consists of two twin 13.2 mm Type 93 machine guns located amidship, on a platform attached to the rear smoke funnel. Practically speaking they are applicable primarily for anti-aircraft role, similarly to the machine guns on the Mutsuki, however they have notably higher firepower, even if overall they are the weakest secondaries among Ayanami's BR. 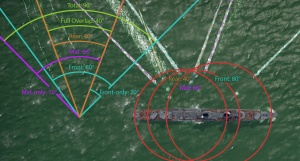 The Fubuki has three triple torpedo mounts of a 610 mm calibre. They do not carry an onboard reload. These torpedoes are the Type 90, which have good speed - 85 KM/H or 52 MP/H - and a 7 km range. The Type 90 carries 480 kg of TNT equivalent explosives, which is only beaten out by the Yuugumo and Kiyoshimo's Type 93s. Overall, they are strong torpedoes for their 4.0 BR, given their good range, fast speed and large explosive filler. She has access to a 'Torpedo Mode', giving her extra range for less speed.

Unlike on the IJN Mutsuki, launchers on the Ayanami have a much more intuitive setup, with the first, front launcher covering the widest firing arc (80°), but also being the first one to fire when manoeuvring bow-first towards the enemy. Second, middle launcher having relatively decent 66° firing arc and oriented towards rear of the ship is also fairly usable. The tricky one is the third launcher, aiming exactly perpendicular to the ship, and having a very narrow field of fire plays more of a support role, forcing ship to effectively expose its entire length to the enemy in order to release any of its torpedoes. Overall though, it's a very practical setup, making Fubuki-class destroyers an extremely dangerous enemies regarding their torpedo setup, with hostile often even being unable to recognize that the ship released torpedoes from frontal launcher when its firing consistent gunnery barrage.

Fubuki-class is a good long-range combatant. Fast shell travel speed of her guns enables effective engagement at ranges where they'd struggle with a response, which is further aided by a relatively fast and long-range torpedoes (trading speed for a significant increase in range with the Torpedo mode modification).

The ship can also be effectively used as a kiter, owning it to a rear-heavy primary armament and an ability to deploy a significant number of powerful, long-range torpedoes. However, an average speed for the BR makes it far more challenging to choose the engagements when compared to faster Mutsuki.