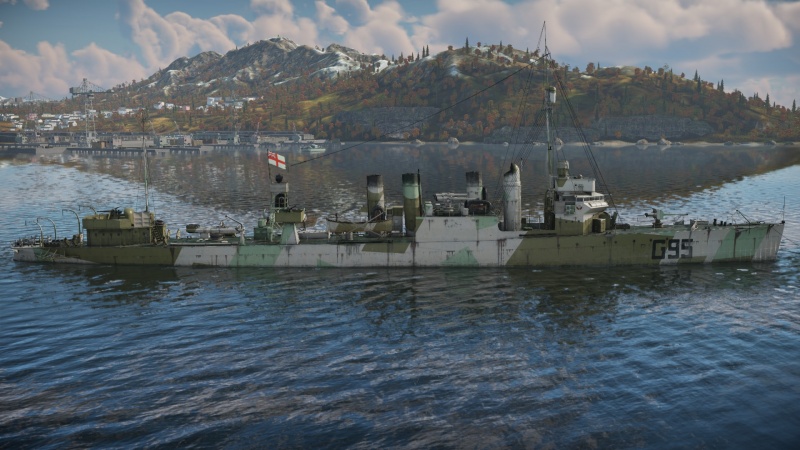 The HMS Montgomery, pennant number G95, part of the Town class is a destroyer provided to the Royal Navy by the United States Navy, during the early stages of the Second World War. Originally known as USS Wickes (DD-75), as the lead ship of the Wickes class.

Despite her resemblance with HMS Churchill, Montgomery is moderately more self-sufficient in combat against other reserve destroyers, thanks to the preservation of 3 high-calibre guns. Though unfortunately, this comes as a trade-off for the support armament of the HMS Churchill.

Other than these slight main armament changes, Montgomery retains the same problematic aspects like modest crew count, low top speed and insufficient variety of secondary armaments. Therefore, players should decide whether this support/combat destroyer gameplay is more appealing than the Escort role of the Churchill.

With a large black-coloured G95 pennant number painted towards the bow and various green tones with white highlights along a dark green upper deck, she can be distinguished from the HMS Churchill and all the United States' Clemson class.

Other distinguishing traits are the low freeboard distance on the stern, almost dug in the water. There are four funnels placed at the same height close to each other, with the pairs, only divided by a superstructure aftwards of the bridge; this superstructure also settles two of the 102 mm guns.

Although being less combat-worthy than other destroyers, Montgomery's armament of three 102 mm cannons was conserved for surface defence and convoy support; especially to defend from raiding submarines and German S-boots. Not exactly meant to fight alone against dedicated combat destroyers