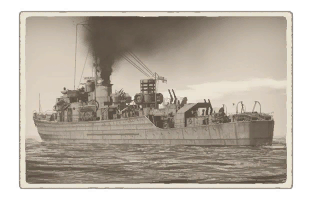 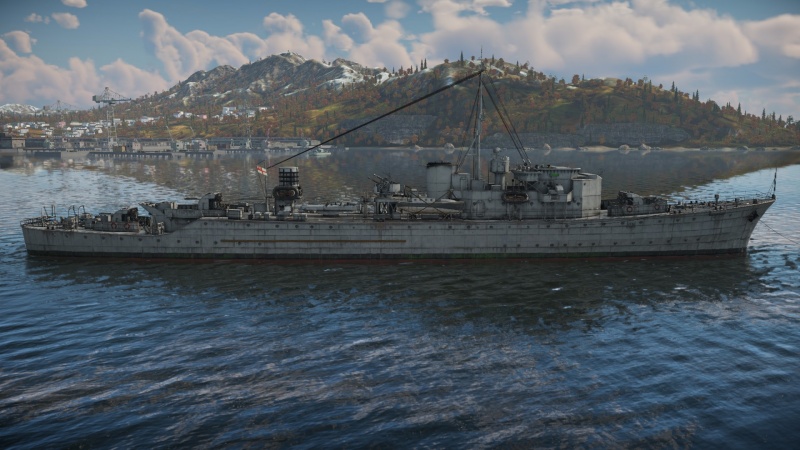 HMS Brissenden, pennant number L79, part of the Hunt-class, is an escort destroyer completed and sent into service in 1943 with the Royal Navy's Home fleet. The Brissenden (Series IV) is an improvement in the Hunt-class. At glance, without much difference in the armament and design layout, but actually with several noteworthy differences.

The slow-paced fast-firing support gameplay won't vary as much, but there is now the possibility to launch a modest number of torpedoes. Anti-air armament was increased, along the crew needed to man this new equipment. Those modifications in armament and design also caused a slight tonnage increase in the displacement and thus an even lower top speed. In spite of all these downsides, the Hunt-class remains a cunning adversary.

The sloop-like appearance of the Brissenden should not be devalued. Her armament layout is one main turret in the aft and the other two towards the stern. She can be identified by her stained dark-grey hull with a large freeboard and a rather obvious dark green waterline.

The sole funnel is connected just abaft to the bridge structure. Is a vertical funnel, unlike the Calpe's inclined funnel. Her bow type is a flared bow, contrary to many British destroyers of the epoch. Her extended forecastle to aft is different from the Type IIs, thus the hull easily stands out.

While speed and combat endurance won't be her forte, the capable anti-aircraft armament and the quick-firing main guns are sure to cause trouble to unsuspecting enemies. This is a great improvement from the very defensive Town-class, in regards to escort destroyers. Arguably, the main guns are also more effective than those found on the G-class, because of their higher rate of fire and quantity of cannons per emplacement.

HMS Brissenden just like any contemporary destroyer does not offer much protection except for the 16 mm thick steel hull. This allows it to stop small calibre machine gun fire and HE shell fragments. Main calibre guns are protected by 3.175 mm thick gun shields. The anti-aircraft Oerlikon guns are protected by a 12.7 mm thick shields protecting them from small arms fire and shrapnel.

All vital machinery parts are located above the waterline making them prone to damage even from autocannon fire.

Brissenden's crew consists of 170 sailors, making it 3rd lowest crew count of all destroyers at its battle rating.

While being considerably slower than most other destroyers, HMS Brissenden makes up for this with its excellent manoeuvrability and very responsive rudder.

The Brissenden's main armament consists of six 4 inch/45 Mark XVI dual purpose cannons in dual mounts. The first pair is located at the bow right under the bridge, while the other two are located at the stern. All but the rear-most turret have ±180 degrees horizontal guidance, while the latter has its horizontal guidance limited to ±145 degrees. Vertical guidance for all three turrets is -10 up to +85 degrees making them useful against aerial threats. Turret traverse speed is quite fast.

The ammo suite consists of HE, HE-TF, HE-VT, and SAP rounds. The HE shells are quite weak against destroyers, due to the calibre of the guns and low explosive filler. SAP is advised to be used against any armoured vessel such as light cruisers or armoured gun boats. The HE-TF shell is a direct downgrade to the HE-VT shell, which can be used to engage enemy aircraft.

The Brissenden's secondary armament consists of a single quadruple 2pdr QF Mk.IIc "pom-pom" mount. It is mounted amidships right behind the funnel. Its primary use is as an anti-aircraft weapon, but it excels in destroying enemy coastal vessels as well due to its high rate of fire and 26 mm of penetration of the AP round at 2,000 m.

Anti-aircraft armament of the Brissenden is made up of four twin 20 mm/70 Oerlikon Mark 24 cannons with one located on each side of the bridge and the other pair located between the torpedo mount and second main gun turret. The relatively high fire rate of the cannons makes them great at short range defense against enemy aircraft or fending off coastal vessels at close range.

The Brissenden has a single triple 21-inch torpedo tube located amidships behind the 2-pounder mount. The torpedo mount has very limited traverse angles resulting in need to turn with the ship to launch torpedoes, the torpedoes are quite fast with speed of 76 km/h and also boasting respectable range of 10 km and 367 kg warhead, in comparison the famous Japanese Long Lance Type 93 torpedoes have warhead consisting of 490 kg. The torpedo mode upgrade extends the range to 13.7 km but at the cost of speed reduction to 65 km/h.

The Brissenden also has four Y-gun depth charge throwers located at the stern with a pair on each side. They cannot be aimed, therefore making their usage very limited.

Being armed more lightly than contemporary destroyers and having very low crew complement, it is advised to stay behind and let more powerful ships attack first, whilst supporting them with long range fire and destroying coastal crafts trying to launch torpedoes on the advancing ships. After the initial threat is taken care of, the captain of the Brissenden should advance further to utilize its anti-aircraft capabilities protecting fellow team mates.

The Hunt class, HMS Brissenden (L79) was an escort destroyer of the Hunt class of small destroyers built for the Royal Navy. Built during the Second World War, the ship was completed to a completely different design than her predecessors including the L71, including the fitting of torpedo tubes. HMS Brissenden saw some service during the Second World War, including convoy escort duties in the Mediterranean and Arctic theatres. She remained in the Mediterranean theatre until 1947, when she was reduced to reserve and eventually scrapped.

The Hunt class was a class of small destroyer (or destroyer escort) designed specifically for convoy escort duties. Ordered at the beginning of the Second World War, the ships were intended to fulfill a variety of duties, primarily being of the convoy escort role. Their smaller size made them much more affordable than the larger fleet destroyers that the Royal Navy had in service, while their strong armament made them suitable for convoy escort. This was reflected in the numbers of ships built - in total, 86 Hunts were completed in four groups, many of which were given to foreign navies. HMS Brissenden belonged to the fourth and final group, of which there were only two vessels. She was laid down in February of 1941 and commissioned in February of 1943.

HMS Brissenden was completed to a different design than the previous three groups. She displaced 1,175 tons standard and had a complement of 170. Her main armament consisted of six 4-inch (105 mm) guns in twin turrets, one fore and two aft. Brissenden also carried a secondary armament of a single quadruple Pom-Pom mount and several 20 mm Oerlikon guns. Unlike the other Hunts, HMS Brissenden carried a single triple 533 mm torpedo tube mount. Being an escort destroyer, Brissenden was only capable of making 26 knots (48 km/h). However, that was more than enough for the role she was meant to fulfill.

After her commissioning in February of 1943, HMS Brissenden was commissioned into the British Home Fleet. She served there for just over 3 months before being assigned to the Mediterranean fleet for convoy escort and fire support duties. She was part of the escort force for the convoy WS31 towards Gibraltar and headed to Malta, where she provided fire support and patrol duties off of the Allied landings at Sicily. However, during this time, she suffered a collision with the destroyer Blankney and was severely damaged. As a result, she returned to the United Kingdom for repairs.

After the repairs were completed, Brissenden went on to serve as a convoy escort in the Arctic, escorting JW 54A to Iceland before turning back. She was also active in fleet defence during the time of the D-Day landings and engaged enemy light naval forces several times. In January of 1945, she returned to port for a refit, before rejoining the home fleet until July when she was transferred to the Mediterranean fleet. Brissenden remained in the Mediterranean after the war until 1947, when she was reduced to reserve in the UK. The ship was considered by Kuwait to become their Royal yacht, but this didn't come through, and the ship was scrapped in 1965.