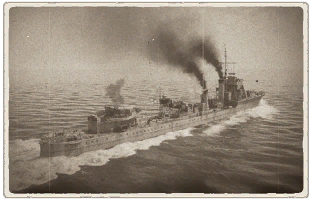 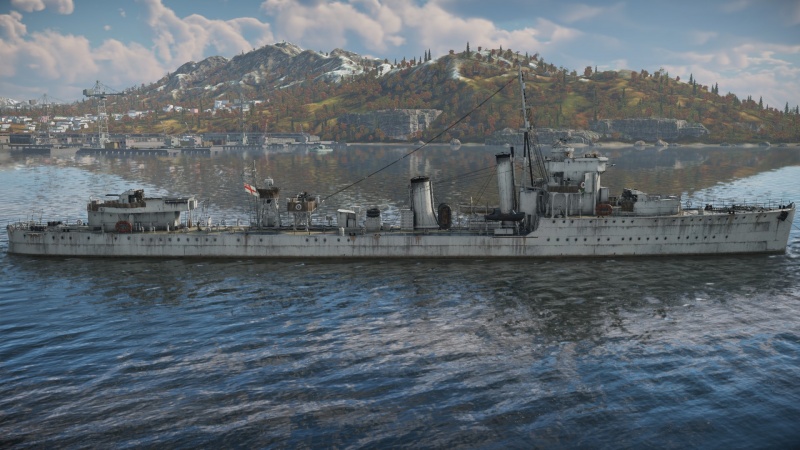 The V-class, HMS Vega (L41), 1944 is a rank I British destroyer with a battle rating of 3.7 (AB/RB/SB). It was introduced in Update "Direct Hit" as a replacement for the HMS Churchill.

The Vega lacks survivability, but not necessarily to a crippling degree. There is no additional armour beyond the structural steel used in the Vega, and any ammunition can penetrate the Vega. This is a vulnerability shared by all destroyers save for some American destroyers with minor anti-fragmentation hull armour. This flaw applies to all external components of the Vega as well, so primary weaponry and anti-aircraft mounts will be disabled frequently, even by machine gun fire. In addition to this, the size and crew count of the Vega is quite small, so the Vega will be destroyed quite easily.

Both the top speed and manoeuvrability are good on the Vega; the small size of the ship allows for very tight turning circles and effective evasive manoeuvres. Mobility is a significant advantage of the Vega and should be used to both obtain and hold strategic positions and outmanoeuvre enemy fire.

Two twin 4"/45 Mark XVI turrets provide the primary armament of the Vega, and they are powerful compared to other destroyers at a similar BR range. The rate of fire on these turrets is unparalleled among the starter destroyers of any nation, with 20 rounds per minute nearly doubling other nation's rates of fire. The ammunition fired is also competitive among the starter destroyers, with the 4" shells of the Vega being more powerful than both the American and Soviet 4" shells. The German 12.7 cm, the Japanese 120 mm, and the Italian 120 mm are more destructive shell-for-shell than the smaller 4"/45 Mark XVI, but the Vega still maintains the significant rate of fire advantage over those guns.

Also notable is the very good front firing angles of the guns. Both turrets are fully traversable around 360°, and the rear turret has no obstructions near it so it only has a very small blind area at the very front of the ship. Even a slight angling of the Vega will allow 100% of the ship's main armament to be brought upon a target. In addition to this, the turrets have a very good maximum elevation of 80°, allowing for potential combating of air targets. However, the turrets on the Vega do suffer from some significant weaknesses; the rotation speed is painfully slow, even with the appropriate Primary Armament Targeting modification researched. Moreover, the guns are elevated so close range combat with costal vessels can potentially be impaired by a lack of gun depression. These issues are particularly impactful at the BR of the Vega due to the prevalence of fast and nimble vessels.

The twin 4"/45 Mark XVI turrets on the Vega have access to HE, SAP, HE-TF, and HE-VT shells. The HE shells can be used to target coastal vessels and destroyers to an extent, but internal damage and turret damage is limited by a relatively small explosive mass of 1.55 kg of TNT. More recommendable in destroyer-to-destroyer combat is the SAP shell, capable of penetrating enemy armour and exploding internally to disable engines, detonate ammo racks, and more quickly reduce enemy crew counts. SAP, in conjunction with the high rate of fire, is competent against coastal vessels as well, although the hull-break provided by HE ammunition is more reliable. HE-TF and HE-VT are valid choices for combating air targets, with the high elevation of the guns, and HE-VT is more reliable than the HE-TF if given a choice between the two.

Four single-mount 20 mm/70 Oerlikon Mk.II autocannons make up the secondary armament of the Vega. These are good at combating air targets and costal vessels due to their high rate of fire and adequate overall damage output. These guns are only limited by the rather small number of them available on the Vega, and thus can't be completely relied upon as a complete defense against fast targets.

The Vega does not have access to torpedoes, and can only equip depth charges. The depth charges have an explosive mass of 130 kg of TNT and are effective at delivering close range damage, although the range of these significantly limit their impact on larger battles.

The Vega is a unique starter destroyer, completely focused on gunnery and lacking any torpedo armament. Close range combat is dangerous for the Vega, as other ships with torpedoes may easily dispatch the Vega, or fast enemies could outrun the very slow rotation rate of the Vega's turrets. It's therefore more recommendable to favor mid-range engagements, where the superb gunnery and great manoeuvrability of the Vega can shine. The high rate of fire and adequate explosive filler of the 4" guns will make targeting evasive coastal vessels and destroyer components much easier than any other destroyer at the Vega's battle rating.

Attacking the enemy head-on might be a good idea, as you can fire both your guns at the target while turning only about ten degrees to a side. Rapidly switch sides to disrupt the enemy's aim, and keep firing with both cannons. Load the SAP shell and aim for their engines or ammunition racks. Never let torpedo boats get close. Your poor traverse will make aiming at them near impossible. Try opening fire at any you see from afar, fast reload rates will make that job easier. Taking sharp turns will tilt your ship, making aiming guns, which have nearly no depression, difficult.

The V-class of destroyers were built and initially deployed during the First World War, and were some of the most advanced vessels of their type. Notable improvements in engine technology allowed for more efficient engines to be fit in smaller spaces, and resulted in a more compact and powerful destroyers. The Vega was part of the Admiralty V subclass, which were intended to combat newly designed German destroyers. The V-class destroyers also served in WW2, after refits, as escorts. The Vega specifically underwent the WAIR refit, which focused more on anti-aircraft capability.