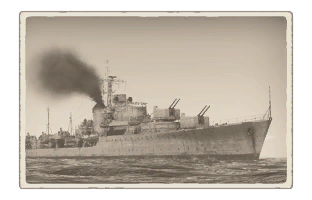 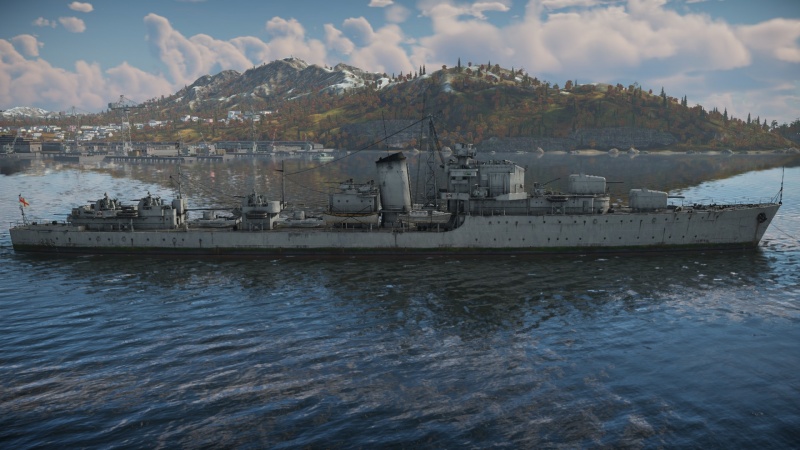 The Battle (D37) is similar to her sister ship in the British tech tree, Battle (D14). While D37 has a slower top speed and loses a main battery gun, it gains better turret traverse and an even more impressive secondary 40 mm battery. The Battle is a fantastic fast assault ship, thanks to its forward-mounted main battery. Use the excellent rate of fire and turret traverse to push the enemy constantly, keeping a small profile to reduce any incoming damage. Don't be afraid to bully patrol boats as well with the Battle's excellent turret traverse and the colossal number of 40 mm guns. At close ranges, your torpedoes can also be very effective thanks to their good damage. You have a large crew size for a destroyer and decent armour protection where it matters, so don't be afraid to weather some fire before retreating. If you get the opportunity, use islands to hide the bulk of your ship and keep your front turrets pointed outwards to harrass oncoming ships.

The Battle is a great destroyer, but is not a cruiser, and shouldn't fight them. The small calibre of the shells means even the SAP rounds are pretty hopeless against cruisers, and cruiser guns will happily negate the armour the Battle does boast, so avoid them at all costs, unless you have teammates to back you up, or you can level some torpedoes into the cruiser's flank. The Battle gets good torpedoes, but in terrible launchers, which turn very slowly and have a dreadful firing arc, especially the forward-most launcher. Only use the torpedoes if you can avoid enemy fire, or if the enemy is already in your firing arc. Turning your ship in order to make use of the torpedoes negates your narrow profile advantage, and makes you an easy target. From the side, the Battle is a big ship. 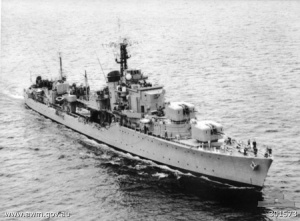 HMAS Tobruk in Jervis Bay, circa. 1954-1958. Note the two Mk VI gun turrets ahead of her superstructure.

The Battle Class, HMAS Tobruk was a destroyer of the Battle class commissioned for the Australian navy. As one of the two-ship "Australian Battle" class, she featured an improved main armament and more advanced gunnery equipment. She was commissioned too late to see service in the Second World War, but served in the Korean war and Malayan Emergency. She was severely damaged in a gunnery accident in 1960, and was written off and sold for scrap.

The Battle class, the predominant late-war British destroyer design before the emergence of the Daring class, was designed to be built in several flotillas. The 1943 "Battles" were thus known as the "Early Battle Class". The United Kingdom intended to build the later Battle class ships with the new QF 4.5 inch Mark VI turret, but these ships were cancelled in early 1945 due to the end of hostilities in the western theatre. However, two ships had been laid down by the Australian navy, which were built and completed nevertheless, to be known as the "Australian Battle" Class ships. Construction was very slow, and Tobruk wasn't commissioned until the early 1950s.

After her commissioning in 1951, Tobruk was deployed to the Korean Theatre to assist naval operations there, primarily serving as a shore bombarder and carrier escort. She returned to Australia in late 1952 for a refit, then deployed to Korea again, this time staying until 1954. After she returned home, Tobruk underwent a refit, and was deployed as part of an Australian naval squadron to southeast Asia (the Far East Strategic Reserve). She later served during the Malayan Emergency, and received a second battle star (her first in Korea) for it. In September of 1960, Tobruk was conducting exercises with her sister ship Anzac when a targeting error caused a shell from Anzac to hit her; the damage was severe, and two of Anzac's crew members were charged for the accident. It was deemed that the damage was uneconomical to repair, and as a result, Tobruk was placed in reserve and later scrapped.

HMAS Tobruk was the second of the two ships to be ordered and was laid down on 5 August 1946 in Sydney. Being built in the immediate postwar years meant that construction progressed slowly, resulting in the ship being only commissioned into RAN service in May 1950.

From there, HMAS Tobruk took part in several conflicts of the 1950s, such as the Korean War and the Malayan Emergency, earning the ship two battle honours. In the late 1950s, HMAS Tobruk was subjected to its first of two friendly fire incidents, which caused light structural damage and the loss of one crew member.

The second incident, which also sealed HMAS Tobruk’s fate, occurred in September 1960. Namely, the ship was once again hit by friendly fire, this time coming from her sistership HMAS Anzac during a gunnery exercise off Jervis Bay. However, the damage was severe enough to be considered uneconomical to perform repairs, resulting in the ship being decommissioned in late 1960.

HMAS Tobruk undertook its final sea voyage under tow to Japan where the ship was ultimately broken up for scrap in 1972.

In War Thunder, HMAS Tobruk will be a new destroyer coming to rank III of the British naval forces tree as part of the upcoming update 1.95 "Northern wind". Compared to the existing Battle-class destroyer in game - HMS Armada - HMAS Tobruk offers its aspiring captains improved anti-air firepower and survivability, coming at the cost of slightly reduced mobility and a cut down primary armament suit.