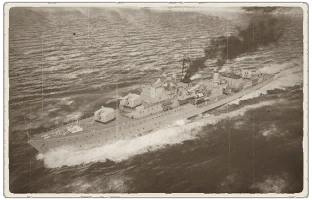 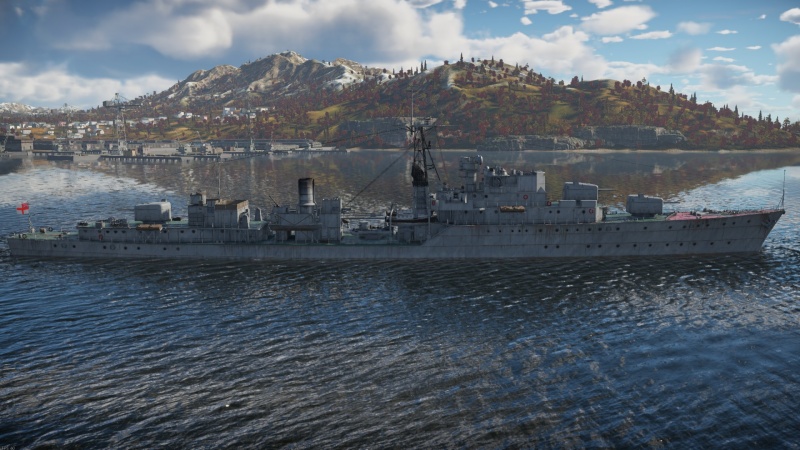 The Daring-class, HMS Diana, 1958 is a rank III British destroyer with a battle rating of 4.7 (AB/RB/SB). It was introduced in Update "Fire and Ice".

Designed in the immediate aftermath of World War II, the Daring-class destroyers incorporated lessons learned during the war and reflect change of doctrine of the post-war Royal Navy. The class features an emphasis on operation range and armaments, intended to supplement and eventually supersede cruisers which were deemed too expensive to operate.

Because of her unusually large size for a destroyer at that time, the class were initially called "Darings" in a similar manner to various battleship built after the HMS Dreadnought. Though they were not as revolutionary as its Great War counterparts, they represented the final evolution of the British "gun destroyer" before the advent of guided missile destroyers in the 60s.

When compared to her real life predecessor, the Battle-class destroyer, HMS Diana features similar characteristics along with some noticeable changes. She retains two forward-facing 4.5 inch turret of the Battle-class, but receives also an additional turret at the stern. Being designed for operation range and survivability, she is also considerably more resilient to enemy fire thanks to the compact crew compartment.

However, the Diana still shares the common weakness with other British WWII destroyers in terms of armour (or lack thereof). Her hull is almost devoid of any armour save for a thin layer of anti-fragmentation armour around the bridge and turrets. In addition, her anti-air and rear turret's shell room were located way above the waterline, both of them were fatal weak spot that will be exposed when doing broadsides and can be somewhat counterintuitive to the ship's additional firepower improvement.

Being optimized for operation range, the Diana's top speed is below average for a destroyer. In addition, the ship's displacement will also affect her mobility, making her a bit less manoeuvrable.

The Diana features six 4.5 inch QF Mark V guns as her main armament, mounted in three twin turrets arranged in A-Bs-X position. These were the same weapon system as HMAS Tobruk and thus shared the same automatic ramming system and shell choice from its Australian counterpart, providing great and consistent rate of fire at 20 rpm with no first-stage ammo rack.

The gun has four shell choices: a HE shell with 2.32 kg of TNT equivalent, enough to cause damage to any unarmoured ship, a HE-TF and a HE-VT shell for anti-air purposes with the same filler as regular HE shell, and a SAP shell with largely the same performance as the one from British 5-inch guns.

As mentioned in the "Survivability and armour" section. While it is tempting to do broadsides to exploit the Diana's additional firepower at the rear, in doing so will expose her unprotected magazines at her bow and stern to the enemy. Thus, while in firefight, it is recommended to face her bow to the enemy at all times only use her frontal armament to minimize the risk of detonation.

Compared to the Battle-class destroyers, the Diana's AA defense is somewhat of a downgrade due to the lower gun count and less coverage. Nevertheless, they still provide great defense against enemy aircraft, especially when used in tandem with the 4.5 inch guns.

HMS Diana was laid down at Clydebank, Glasgow on 3rd April 1947, launched on 8th May 1952, and was commissioned on 29th March 1954. Originally planned to be named Druid, this was changed to Diana during construction. HMS Diana was considered a large destroyer, with the design coming from lessons of the Pacific War where long endurance was very important.

With a main armament of six 4.5 inch (114 mm) dual-purpose guns in 3 fully enclosed twin turrets and being fully radar-controlled, the fire control system was considered the most advanced in the Royal Navy at the time. The guns were regarded as highly accurate with a high rate of fire. Completing the armament were 2 x 40 mm Bofors, 5 torpedo tubes and a triple "Squid" anti-submarine mortar.

Seeing combat in the Suez Crisis, HMS Diana was involved with the sinking of Egyptian frigate Domiat, which was engaged in a gun duel with the cruiser HMS Newfoundland. This engagement marked the last time in conflict a ship was sunk by another by gunfire only.

In 1968, Diana was diverted from her route to assist in the search for the British-made, Israeli-ordered submarine Dakar. During this search, Diana diverted again to assist Spanish tanker MV Bahia Blanca which was on fire.

In 1969, HMS Diana was sold to the Peruvian navy, renamed BAP Palacios, and refitted at Cammell Laird with new radar and 8 Exocet missiles.