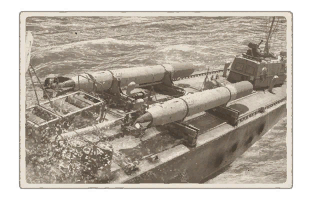 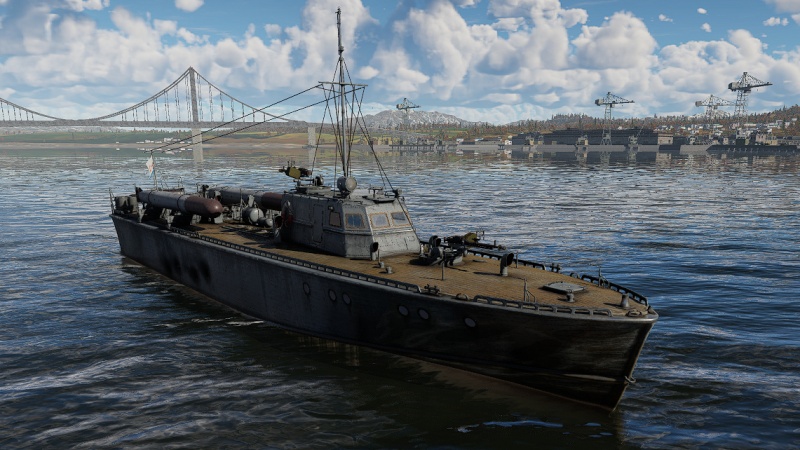 The D-3 Type is a rank I Soviet motor torpedo boat with a battle rating of 1.3 (AB/RB/SB). It was introduced during Update 1.79 "Project X" when the Soviet fleet was implemented into the game. 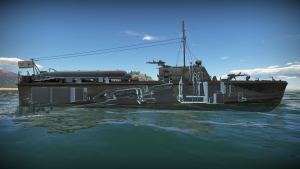 Profile shot of the D-3. Vulnerable areas include the engines located at the centre of the vessel.

Armour is practically non-existent as the D3 is constructed entirely out of wood. All three engines are also located in the centre of the vessel making it quite easy to knock out. Crew consists of 9 men.

The D-3 can reach speeds over 80 km/h in AB and 59 km/h in RB and SB. It is swift, and also very mobile - you can make very sharp turns, due to the quick rudder rerouting speed. The reverse speeds are not bad, reaching a maximum of -28km/h. Although, you shouldn't be going backwards, because it usually takes a lot of time just to come to a stop; it's much safer to make a forwards U-turn.

Primary armament consists of two 12.7 mm DShK machine guns with one located at the bow of the ship and the other one at the centre of the ship allowing for engagement in all 360° directions. However, it should be noted that due to structural designs only one gun can be pointed towards at either the bow or aft of the ship. Reloading the DShK takes about 4.7 seconds and can reliably engage targets up to 1.8 kilometres away. With its 12.7 mm bullets, the D-3 can reliably knock out enemy vessels in the same class and maybe even larger vessels if given enough time. Available ammunition belts include the high explosive incendiary (HEI) and armour piercing incendiary tracer (APIT) rounds.

The D-3 carries two, front facing, 533 mm 53-38 torpedoes located at the stern of the ship. The torpedoes are rather accurate with a default travel distance of 4km and a good speed of 82 km.

Once unlocked, the D-3 can carry four BB-1 depth charges located at the stern of the ship which is also where they are dropped when deployed.

Remember that you can set the Depth Charge activation time before spawning in if you are carrying depth charges. You can select activation times from 3 to 10 seconds, but it's recommended to set it to something in the middle (5-8s), to keep your options open.

The D-3 is a very strong beginner torpedo boat for lower rank battles and can compete quite well with other ships at its BR. However, note that the ship itself has some quicks and flaws which should be remedied to succeed in battle. The ship's main armament consists of two single 12.7 mm DShK machine guns which represents a significant upgrade over the reserve G-5 torpedo boat. As well, the ship can carry two 533 mm torpedoes that can easily shred any ships that the guns cannot take care of. The D-3 does have mediocre mobility for a small torpedo boat, but it is certainly enough to get the ship where it needs to go. Finally, the ship's survivability is decidedly terrible (though average for motor torpedo boats at its BR) meaning that you should try to utilize ambush tactics to maximise the ship's survivability.

At the start of each battle, your first priority should be to capture points. However, rushing straight into points isn't the greatest strategy for the D-3. This is because the D-3 has relatively worse agility when compared to faster MTBs such as the G-5, meaning that it cannot reach capture points nearly as quickly. As a result, one good potential strategy is to flank and find island cover, allowing you to use ambush tactics against enemy ships. The D-3 is not survivable and will get ripped to shreds by any gunfire, rifle-calibre and above. Thus, the best strategy is to not get hit, meaning that island cover is critical for preserving your ship's survivability.

Against smaller boats, try to ambush and destroy them as quickly as possible using the DShK machine guns, which can get the job done very quickly. Against larger vessels, the best strategy is to avoid direct engagement, as the D-3 will get ripped apart far quicker than it can destroy larger vessels. Seeking the assistance of teammates is very helpful, as well as a smokescreen which can be used for a fast getaway. The D-3 does carry torpedoes, but these weapons are not efficient against coastal vessels, meaning that it may be more efficient to leave them off the ship; after all, the torpedoes can be detonated leading to a fiery death.

The Soviet Navy began developing a larger MTB with higher endurance than the previous G-5 class. Four designs were considered, but the D-3 prototype was the most successful. The D-3 had a wooden hull, and it carried torpedoes openly; the G-5 class had a metal hull and carried its torpedoes in groups in the rear deck.

D-3 was commissioned in 1941, and was active in the Black Sea along with SM-3. Together they sank CB-5 - an Italian midget submarine - and the German barge F-334.