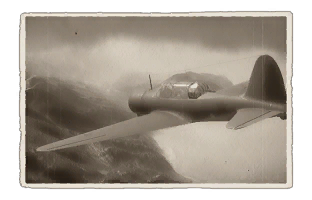 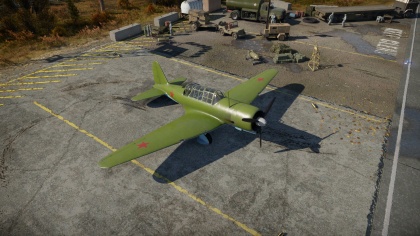 The BB-1 in the garage 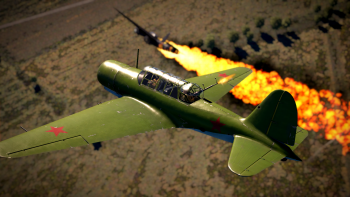 Even small attacker aircraft can dominate the sky.

The BB-1 is a very forgiving aircraft, especially to those who are new to attack aircraft. While not a fast aircraft, it does allow pilots to buzz tree-tops and follow the terrain on the way to the targets. Though not an aircraft which is adequate to bomb bases, it does have a keen ability to hover slowly weaving around a battlefield where light trucks, anti-aircraft artillery and light tanks will be about. The bomb options and the machine gun load-outs allow for this attacker to drop bombs on ground targets along with strafing them with machine guns. Once passed the targets, the BB-1 can easily manoeuvre around and begin the attack run again. Enemy attackers and fighters which come along will attempt to eliminate the BB-1, but will quickly realize there is a rear-facing dorsal turret which a gunner mans a 7.26 mm ShKAS machine gun and can be quite effective at times hitting, damaging and disabling aircraft which choose to sit on the BB-1's tail. Though not a strong suit of the attacker, it can if need be, engage as a fighter. This attacker will not win any speed records when dogfighting, though, with its large wings and rudder, it does have the ability to turn remarkably fast making it difficult for an enemy fighter to get a firing solution. 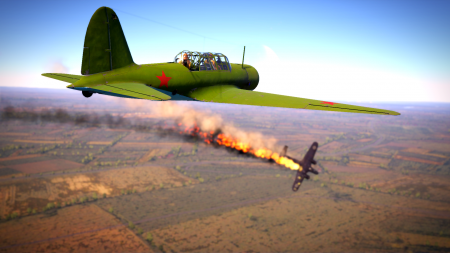 The BB-1 was meant to be a light-weight attacker/bomber which could be produced rather quickly. To perform its mission adequately with the engines which were slated to be used, this aircraft needed to remain as light as possible, but still be able to carry an effective load of bombs. To eliminate weight where possible included not installing any protective armour or bulletproof windshields. Crazy as it sounds, another weight-saving method was to utilize wood panelling which is poor protection even against smaller 7 mm machine gun rounds. Though three fuel tanks are found in the aircraft (one in the fuselage in front of the cockpit and one in each wing), an ingenious solution of the time aided in the prevention of fuel tank fires and that was due to the aircraft having the ability to vent exhaust into the fuel tanks, preventing the burning of the fuel if the tank becomes ruptured. 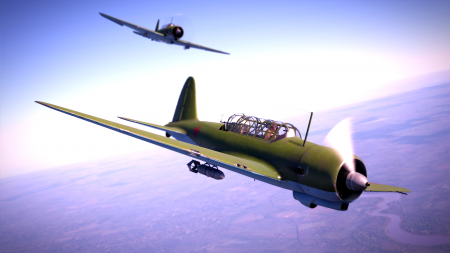 The BB-1 is defended with a: 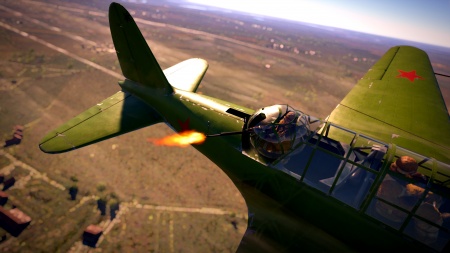 The BB-1 is one of the best low-BR ground attackers available. It can take up to 12 50kg bombs, with 8 of these being carried on the wings and an additional 4 in the bomb bay. These 4 can be dropped individually instead of 2 at a time like the wing-mounted ones. The aircraft also has a bomb sight, which can be very useful for precise bombing and allows you to set a 0 second fuse as you don't have to get close enough to be injured by it. It can also fight other fighters, having decent performance and a good turn rate, as well as quite a lot of firepower.

This aircraft is an all-rounder, able to destroy almost all ground targets. It has a rear gunner, but it's usefulness is limited due to it's limited firepower combined with the plane's already good turn rate, making the plane able to turn-fight. It can still be used, however, and if you are lucky you might score a few extra ground hits with it once your ammo has run out.

A single-engine, mixed-construction monoplane light bomber with retractable landing gear and tail wheel. This project was developed as an entry in the 1936 competition for the best high-speed long-range ground-attack reconnaissance plane, to be known as the "Ivanov." The design and construction were completed in a record time of 6 months. The first flight of the SZ-1 (SZ: "Stalin's Mission"), with an M-62 engine, was made on August 25, 1937.

The first production aircraft were fitted with air-cooled radial 14-cylinder OKB Tumansky M-87 engines, rated at 950 hp. The aircraft's armament included a battery of 4 fixed ShKAS 7.62mm machine guns with 850 rounds each, mounted in pairs on each wing. To protect the aircraft's rear, the navigator had a rotating MB-5 turret with another 7.62mm machine gun with 900 rounds of ammunition. The prototypes had a ventral MB-2 turret with a ShKAS machine gun, but this was removed as it seemed unlikely that any enemy fighter attacks would come from below when the plane was flying at a low altitude. However, it was soon shown that this was a poor decision, as such attacks were frequent in actual combat.

The plane's usual bomb load, when flying at its maximum range, was 400 kilograms. Overweight capacity was up to 600 kilograms. The maximum bomb load was 1200 kilograms. Bombs of up to 100 kilograms could be placed both in the internal bomb bay and suspended under the outer wings. KD-1 or KD-2 bomb racks were used to carry and drop these bombs. Rockets were not carried."