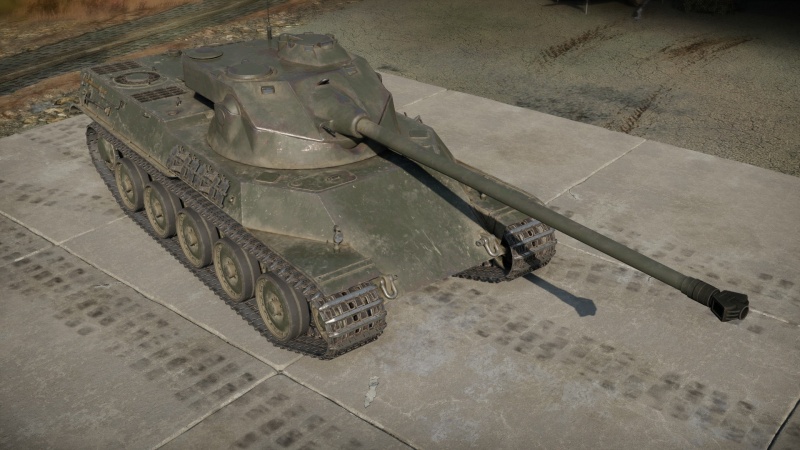 The AMX Char Moyen de 50 tonnes (TOA100) is a rank IV French medium tank with a battle rating of 7.0 (AB/SB) and 7.7 (RB). It was introduced in Update 1.75 "La Résistance". It features the same armament and turret as the Lorraine 40t on a more robust chassis, similar to that of the AMX M4, in sum, it is a fusion of the former's firepower and the latter's mobility and protection. It is the logical next step to the French rank IV medium tech tree.

The lower part resembles that of a Panther's hull with its overlapping metal road wheels, its two large fans over the engine deck, its sloped front and back armour and its high profile. There are a few things that distinguishes it from its predecessor: there is not longer a "flat" portion between the LFP and UFP and the two fan casings have been removed. As for the turret, it is quite a classical post-war French design: an oscillating turret fitted with an autoloader mechanism, a long gun and turret bulge and a thick turret ring.

The AMX-50 (TOA100)'s hull is very similar to that of the famous German medium tank, even in armour values. It is only slightly weak from the side, making angling quite ineffective. This armour should be able to deflect incoming shots from the weaker tanks it may encounter at its BR spread, notably the famous Soviet 85 mm D-5T. With its good slope, it can easily deflect APCR shots. The only negative point is the turret: it is very weak to incoming shots: with only 45 mm sloped at 52°, it is weaker than a T-34-85 (D-5T)'s hull. The turret armour is a noticeable downgrade from the AMX M4, so you will need to be more careful about taking hits. The only way to avoid being taken down too easily is to increase distance between the AMX-50 position and the enemy. Don't worry about that: the 100 mm gun is suited for that purpose.

While not the fastest tank, the AMX-50 (TOA100) certainly is capable of many feats of agility. This tank may be the slowest French rank IV tank, which is not a bad thing considering French tank's general dynamic gameplay at this BR. "Don't put the tank in nasty front-line situations" is the best advice to follow with this tank. As it is, this 800+ HP engine should be able to carry the tank to any location in good time.

The SA47 L/58 is a very potent gun for a rank IV tank: it performs in a similar way to the Soviet 100 mm D-10T equipped on the T-54/55 (Family) series. While not having any HE filler in their AP rounds, the French engineers somehow managed to optimize armour spalling on penetrating shots and muzzle velocity, making these shells very good at long-range engagements. This gun is also mounted with an autoloader, which provides it with a solid 4 seconds reload time. It has good gun depression and a fast turret traverse, which enables this tank to react quickly to flankers and take solid hulled-down position, its high gun placement minimizes the tank's silhouette behind hills. 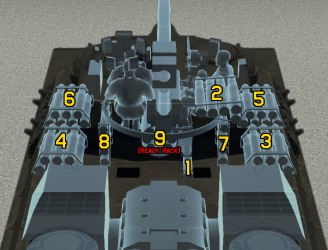 This tank features an auto-loading system that removes the need for a crew member to reload the main gun, although a loader is present to restock the autoloader. A large drum of seven rounds is found underneath the gun breech for rapid use. Once this drum is empty, rounds in the hull will need to be placed in the autoloader rack before it can be used by the autoloader, which takes about 14 seconds to perform for one round. Nine rounds are found in three racks near the bottom of the hull behind the driver and machine-gunner while the rest of the stowage is found in the side sponsons above the tracks, aside from a small rack of 5 rounds near the rear of the turret.