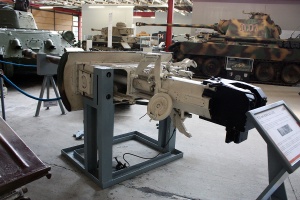 The KwK 42 gun has shells with high muzzle velocity, but relatively low projectile mass, which along with a long reload makes it more suited for long range engagements.

The stock APCBC shell has enough power to frontally penetrate a M4A3E2 Jumbo. Although, this can be somewhat unpredictable: if the Jumbo is angling, the shell will bounce or shatter.