The GIAT CN120-26 F1 (also known as "Lisse") is a 120 mm anti-tank cannon, with a smoothbore barrel designed by EFAB de Bourges and manufactured by the French company GIAT. It was derived from the CN120-25 intended for the AMX-40 and it is only mounted on the Leclerc series of tanks.

It has a sliding vertical breechblock and it can also be distinguished by the absence of a fume extractor, instead, the gases are being evacuated by overpressure. However, the tropicalized Leclerc variant of the Emirati Army uses a system of blowing compressed air into the chamber via a cannula, instead of the overpressure system that the French counterpart uses.

On the outer layer of the cannon, there is a thermal insulation jacket and the length of the cannon is 6,931 mm, with a mass of around 2,800 kg. The maximum rate of fire can be up to 12 RPM, but in practice, this is usually closer to 10 RPM. It has a maximum gun depression of 18° and minimum gun depression of -7°. The maximum effective range is 4,000 m for the APFSDS shell, and roughly 3,000 m for the HEAT shell, albeit in practice, it is lower than that.

The Leclerc's OFL 120 F1 round with its fast velocity of 1,790 m/s and high penetration power makes it excellent at fulfilling the sniping role. One should avoid rural combat as the Leclerc series of tanks are easily destroyed in close quarters battles, as its weaknesses are very visible. Finding a vantage point where most of your tank is covered is the most effective way to use the GIAT CN120-26.

But since the user starts out with a HEAT-FS as their stock round, at first one will have to play more aggressively up until they unlock the OFL 120 F1 round, but should still generally avoid close quarters confrontations and brawls. 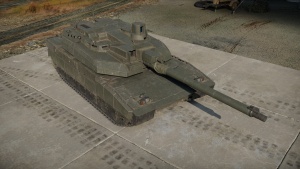