The CN90 F4 (otherwise known as the Super 90) is a 90 mm smooth-bore cannon manufactured by Nexter. The Super 90 is based off of the earlier F1 and F3 versions and compared to the earlier versions, it is way lighter and has higher muzzle velocities, while also being 19 calibres longer than the earlier version of the cannon.

Both the barrel and the breech are made from ESR (Electro-Slag Refined) steel, a process which adds more polish and toughness to the steel, while the vertical wedge breech is inclined at an angle of 35° to allow easier, and faster, reloading.

A thermal coat is also added onto the cannon to help withstand higher temperatures without the barrel deforming. At the end of the cannon, a single-baffle muzzle brake is added to aid with recoil. 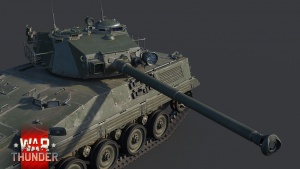