The 105/47 F2 MECA 105 mm (otherwise known as the Modèle F2) is a medium-pressure cannon mounted in a GIAT Industries TK 105 three-man turret that fires 105 x 527R proprietary ammunition. The turret uses a SAMM CH49 electrohydraulic gun control system, albeit it lacks a stabilization system. An NF-1 7.62 mm machine gun is fitted coaxially to the main cannon and two electrically-operated smoke launchers are fitted onto each side of the turret. A total of 38 rounds are carried for the main cannon.

The 105 mm F2 rifled tank gun has a very light barrel with shallow rifling. The semi-automatic breech has a vertical sliding wedge block and electrical firing system. There is a fixed muzzle reference mirror just behind and above the double-baffle muzzle break, which helps with detecting barrel warping. A single hydropneumatic cylinder is mounted on the left side of the gun that acts as the recoil brake, while the recuperator cylinder is mounted on the right-hand side.

Because it is a medium pressure cannon, it has great muzzle velocity. It has access to HE, HEAT-FS but also APFSDS which unlike the APFSDS found in the AMX-30s, creates average amounts of spalling, making one shot kills while using it way more consistent and reliable.

The HEAT-FS round creates consistent damage after penetration, but just like other HEAT-FS ammunition, it isn't uncommon for a simple bush to stop the whole round. One should think about grabbing at least a few HEAT-FS rounds, as only chemical shells can cause hull-break to light vehicles and APFSDS rounds can just pass straight trough them, creating little to no damage as their armour is very thin most of the time.

The Modèle F2 excels at fighting over long distance due to its rounds having pretty high velocity. Because it is only mounted on the AMX-10RC, which is a light vehicle, one should not charge forwards and take on brawls. The effective way to use this cannon is to hang around in the back, preferably in a vantage point, and pick off unsuspecting enemies. The cannon has -8° of gun depression, but due to the AMX-10RC's controlled suspension, one can take advantage of hills and uneven terrain, effectively making the gun depression lower/higher.

The Modèle F2 (F2 MECA) was designed as a light gun that could fire fin-stabilized projectiles and it was made exclusively for the AMX-10RC. The 105 mm F2 guns installed in the AMX-10RC (6 x 6) vehicles of the French Army were to have been replaced by the rifled 105 mm 105 G2 gun.

It was only fitted to the AMX-10RC which is still in service with France, Morocco and Qatar. Since the AMX-10RC is not marketed by GIAT anymore, it is very unlikely that there will be any future productions of this gun. 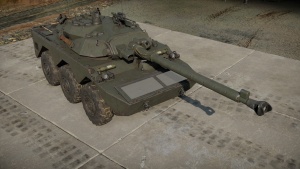 Modèle F2 mounted on an AMX-10RC