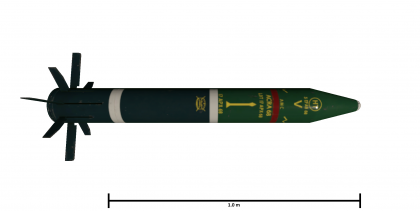 The ACRA missile (scale is approximate)

The Anti-Char Rapide Autopropulsé (Self-Propelled Rapid Anti Tank Missile) or ACRA for short is a 142 mm cannon utilized by the French AMX-30 ACRA. It was heavily inspired by the American 152 mm Gun / Launcher, utilized by the M551. It used a much superior muzzle velocity and the missile had a flight time of around 7 seconds. It was mounted on the AMX-30 but also on the AMX-10P but only a few prototypes were built, as the project was very expensive. This lead to abandonment of the project entirely.

The Anti-Char Rapide Autopropulsé is a 142 mm Gun / Launcher, capable of firing both guided and unguided munitions, with the fire rate of 4 rounds per minute.

The MP ACRA is an ATGM that can reach the speed of around 500 m/s with the penetration force of up to 700 mm. The maximum range is roughly 3,300 m with a flight time of approximately 7 seconds. The projectile weighs up to 24 kg and the warhead itself is a 2 kg shaped charge of RDX.

The MUC is an unguided HE rocket that exits the barrel with the speed of around 550 m/s, but then deploys its fins and accelerates up to 700 m/s with the penetration force of up to 38 mm. The maximum theoretical range is roughly 8,000 m, but the elevation of the gun is insufficient for such a shot. The projectile weighs up to 20 kg and the warhead itself is 2 kg of TNT.

The ACRA is a powerful 142 mm gun / launcher, capable of taking out most of the opposition with a single shot to the front if the MP ACRA shot is loaded. You should take note of the lengthy reload time as it leaves you vulnerable for 13.8 seconds. Always have some cover nearby that you can retreat to and reload safely. Treat it like a tank destroyer instead of a medium tank. Do not engage in direct firefights, but rather try to snipe your enemies down.

The ACRA program began in the year 1961 by the Atelier de construction de Puteaux or APX for short and it was created in 1971 by the Groupement Industriel des Armements Terrestres. It was heavily inspired and influenced by the American M551 and its MGM-51 Shillelagh missile. It had much superior muzzle velocity of 550 m/s with an effective range of about 3,300 m.

At first, the testing started between 1970 -1974 with an AMX-30 MBT that carried the T142 ACRA turret, but the platform AMX-10 P was also used and two more prototypes were made. The biggest problems were the astronomical price of the missile, being 1,000,000 French francs per single shot, but also the fact that the ACRA could not be attached to helicopters. The project was abandoned in the 1972, although tests further continued up until the end of 1974. Together, roughly 500 missiles were fired. In the end, it was decided that the Euromissile HOT should take the ACRA's place and it would become the standard AGM for the French Army. 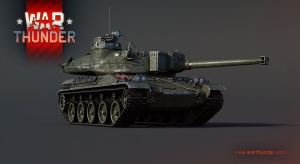 ACRA mounted on the AMX-30