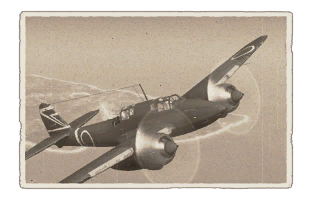 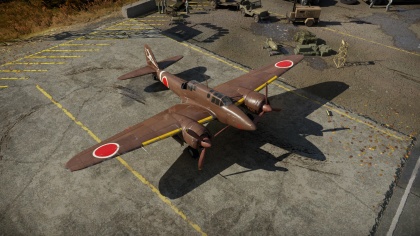 The Ki-45 hei also retains its impressive turn rate from the Ki-45 tei. Although the aircraft itself is large and presents an "easy target" in many players' minds, the Ki-45 is rather nimble. Use this to your advantage when engaging enemy aircraft. Unfortunately, the Ki-45 is a heavy fighter, meaning its turn time is still not on par with other aircraft such as the F2A-3. In certain cases, the Ki-45 pilot may have to rely on his or her tail gunner to get the job done. The "otsu" version of the Ki-45 features a 7.92 mm Type 98 machine gun with 1050 rounds. Although lacklustre, with shot placement it is possible to destroy enemies on the aircraft's tail. Aim for the pilot or the engine, as those are generally the weakest points on most aircraft. If the tailing enemy is a bi-plane, aim for the wings since they are very fragile.

The Toryu is also rather fragile for a heavy fighter. Although it does feature two engines, the Ki-45 does not have very much armour protection. Only the back of the pilot's seat has armour, leaving both the gunner and engines unprotected. This can prove costly in a fight. If one does find him or herself tailed, call upon teammates for assistance.

The Ki-45 hei's armament is much more suited for bomber hunting than its earlier machine gun armed variant. With a moderate ammunition pool, it is easily possible to destroy multiple enemies with this aircraft. It is recommended to use the 20 mm cannon only when the pilot is sure he or she will hit the enemy aircraft, as it only holds 100 shells. The 37 mm cannon does impressive damage but requires a high degree of accuracy and lead. Practicing with this weapon will help greatly, especially when attacking fighters.

Initially designed to be a bomber escort, the Ki-45 was first deployed in what is now China and Vietnam. It was found to be easily outclassed by P-40s piloted by the Flying Tigers. As a result, the Ki-45's role was changed to anti-shipping and ground attack, where it performed satisfactorily. Nonetheless, the Ki-45's greatest strength proved to be its bomber intercepting capabilities. Heavily armed with 37 mm cannon, the Toryu (Dragon Slayer) could destroy heavy bombers with ease. As the war progressed, the need for an interceptor to defend the Japanese mainland was ever present. Soon, the Ki-45 was deployed to counter B-29 Superfortress raids. Although its armament was clearly deadly enough, the Ki-45 suffered at high altitudes. Pilots soon resorted to ramming attacks against the Superfortresses. Special attack groups specifically designed for this purpose formed, but by late 1945 Imperial Japan's fate had been sealed. The Allies allocated the name "Nick" to the Ki-45.

The Ki-45 KAI Hei variant, with modified on-board armament (when compared with the Ki-45 KAI Otsu), was specially created to attack sea targets.

A 37 mm Ho-203 automatic cannon with 15 rounds was mounted in the nose fairing, which had its shape modified. A 20 mm Ho-3 cannon with 100 rounds was placed in the lower section of the fuselage.

The 7.92 mm Type 98 machine gun with 1,050 rounds remained in the rear defensive turret. In all other respects, the airframe was like that of the Ki-45 KAI Otsu.

One of the Ki-45 KAI Hei fighters was thoroughly tested in 1945 by US Army Technical Intelligence experts. The test results report mentioned the very good takeoff characteristics of the aircraft. Other capabilities won praise too: for example, the American pilots were struck by the machine's horizontal manoeuvrability. Stall characteristics were satisfactory, and pilots could sense when speed loss caused by flow separation was imminent. Landing performance was found to be very good, as well.

Observed drawbacks included the aircraft's low taxi controllability due to poor breaks and the free-pivoting tail wheel. In addition, the aircraft's high nose-up position obscured forward visibility, so there was no choice but to taxi in a zigzag pattern.

In addition to that, the report mentioned significant noise and vibration levels in the cockpit at all speeds, unsatisfactory pilot seat adjustment, and poor downward and backward visibility from the pilot's cockpit.