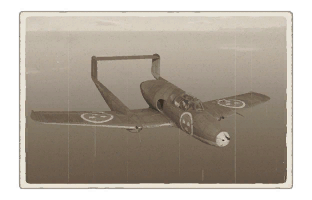 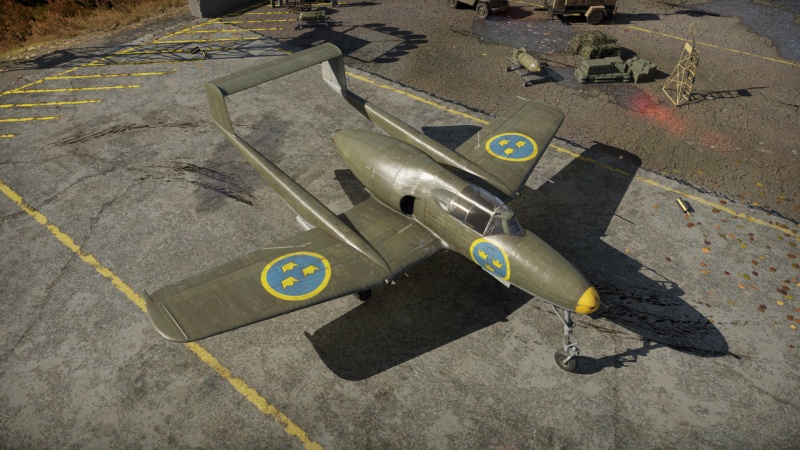 The J21RA is a jet-powered version of the prior J21A-2, giving it higher speeds and new guns. 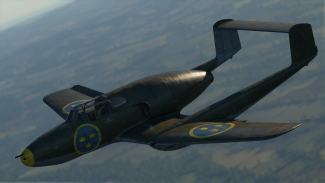 J21RA as seen from the side.

The J21RA is a highly manoeuvrable plane, with a good climb rate. The guns, although a downgrade from the previous propeller-driven 13 mm version, still provide enough firepower to down most targets efficiently. The only downside is the airframe, which prevents the aircraft from reaching higher speeds. This is due to the engine being a bit too powerful for the plane, making it common to rip in straight lines and shallow dives. Luckily the J21RA features air-brakes, helping it slow down more effectively, allowing it to fight comfortable at the desired speed range.

The J21RA is distinctly different in looks and performance from all other planes found at the same BR-range. Along with the Yak-15, the Saab 21R is one of the two propeller-driven planes successfully converted into jet propulsion. Just like its Soviet counterpart, the solution comes at the cost of speed. Although a lot more powerful than the J21A-2, it still has the same airframe limitations, resulting in good turn-rate. The climb-rate is also significantly improved due to the weight of the vehicle, resulting in good vertical energy with the ability to stall out slower opponents. Getting back down can prove difficult however, as the J21RA has a rip speed of just 800 km/h, which it can accidentally reach if not careful. To avoid this, the plane features a small set of air-brakes, which aids in maintaining a safe speed. Experienced pilots can find a good use for them, along with the powerful flaps, to force overshoots, or to out-turn propeller-driven opponents. Be careful with the engine however! The propulsion of the J21RA is very primitive, and suffers from fuel starvation during extreme manoeuvres, especially in negative G-loads. This can be fatal when fighting vertically, as the engine drops all power almost immediately, and has to spool back up again before reaching the same efficiency as before.

The flight performance is identical to that of the A21RB, but with slightly less engine power, as the RM1 engine generates some 130 kgf less.

In terms of protection, the pilot is well protected by metal plates and bulletproof glass. But the pilot's safety isn't the primary concern for the J21RA, as the tail section is incredibly vulnerable. This is due to the twin-boom design, making a tailstrike twice as likely. And since the tail connects to the wing-section, the plane tends to lose tail-control when struck by wing damage. The engine is very large in comparison to the rest of the plane, making it a common target. The J21RA should avoid all possible damage, as surviving large amounts of fire is highly unlikely. Pulling away from head-on engagements increases the survivability immensely. Avoiding the enemy airfield is also important, as the J21RA lacks the speed to keep it safe from flak fire.

The J21RA is armed with:

The J21RA shares the same 20 mm cannon found on the previous J21A-2. This cannon is near identical to the Hispano Mk.V, only with a 30 rpm lower fire-rate. The shells perform the same as on all the other 20 mm-armed jets, making it highly devastating against all types of aircraft. The Armoured targets belt performs favourably with this cannon, as the Air targets belt can cause some mishaps during short bursts. The cannon runs out of ammunition quite quickly compared to the machine-guns, so saving it by only making use of the small calibre guns first can be ideal for spraying.

The J21RA features .50 cal machine guns, being identical to the later American ones. Although a direct downgrade from the Swedish 13 mm previously found on the plane, the J21RA makes good use of these cannons, as they allow for distanced engagements, along with additional firepower to back up the 20 mm cannon. Their ammo count is quite high as well, making them great for strafing, and finishing off heavy bombers. 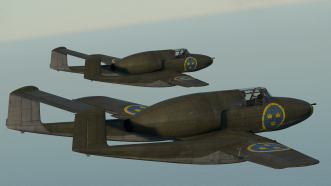 Despite being jet-powered, the J21RA still performs best when played like a propeller driven aircraft. The airplane struggles to reach high speeds, and drops it fairly quickly when manoeuvring. So the best use of the new engine is to gain altitude. Although weak in performance compared to earlier jets, the J21RA is decent at climbing to altitude, and can very efficiently deal with targets thanks to the high agility offered at lower speeds. Although the flaps are designed for much lower speeds (similar to the J21A-2), the plane still performs similar to the propeller variant when turning, making them less desired than on other jets.

The best way to start a match is to immediately gain altitude. A height advantage around 5 km is usually ideal to avoid losing vital speed when fighting, as the plane can simply dive to gain more velocity. The best way to handle opponents, is to single them out from their team, and forcing them to dogfight, as the J21RA is too slow to chase anyone down. The J21RA is also efficient against propeller aircraft, as it can comfortably turn-fight, while keeping a higher speed. When paired with the devastating firepower it provides, the J21RA becomes deadly when used properly.

The J21RA can be used in combined battles (Ground RB & Ground SB), but is overall less efficient compared to the A21RB, as it lacks suspended armaments.

The J21RA is a variant of the Saab 21R, a unique early jet fighter developed from the previous Saab 21. The aircraft was one of two semi-successful conversions of propeller fighters into jet fighters, the other being the Soviet Yak-15 (which was converted from the Yak 1/3/7/9 series). The aircraft served as one of the first jet-engined aircraft in Swedish service and was also the first jet-engined-aircraft produced by Saab. The Saab 21Rs were retired in the 1950s with the introduction of more advanced Swedish aircraft.

During WWII, the Saab aircraft production company produced the Saab 21, a fighter aircraft with an unorthodox twin-boom configuration along with a German DB 605B engine. The first such aircraft flew in July of 1943 and entered service soon thereafter. During this time, the Saab firm explored various options for upgrading their Saab 21s, including a variant powered by a Rolls-Royce Griffon engine producing 2000 hp. However, at the same time, the Saab firm was also investigating the possibility of a jet-engined fighter; this led the Saab firm to pursue a jet-engined variant of the Saab 21 for use with the Swedish air force.

In 1947, Saab received the first older J21 airframes for conversion into a jet fighter, designated the J21R; the airframes were extensively modified to house a British-sourced de Havilland Goblin turbojet in place of the DB 605 and its corresponding propeller. Extensive modifications were also made to the aircraft's fuselage, wings and tailplane; notably, the tail section was redesigned so that the elevator would be clear of the jet engine's exhaust. Additionally, the aircraft featured an ejection seat, a novelty at the time.

Initially, a production run of 124 aircraft was planned; however, this was cut to 64 aircraft when the more-advanced J29 Tunnan became available in 1948. The J21RA was the designation given to the first 34 of these aircraft, powered by the Goblin 2 engine, while the J21RB was powered by an indigenously-built Goblin 3 engine. The J21 was retired in the mid-1950s with the introduction of more advanced aircraft such as the Saab 32 Lansen; no original aircraft were preserved but an old Saab 21 airframe was converted to resemble the Saab 21R; this aircraft is displayed at the Swedish Air Force Museum.

Slap a Jet Engine on a Prop? J21RA - Jengar
The Swedish Jet No Ones Talking About - WhooptieDo