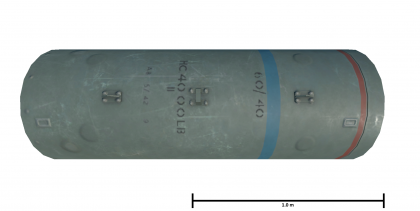 The 4,000 lb "cookie" bomb is best used to destroy bases. In later appearances of this weapon such as the Lancaster, it can destroy a normal base but may struggle on maps with respawning bases. It can be used for airfield bombing although multiple bombs will be required. It can also be used to bomb vehicle columns although this is not advised unless at low altitude to assure a direct hit.

This bomb can be used for the large scale destruction of clustered armoured targets. If used at its lowest BR, it will face mostly light vehicles, increasing its potency.