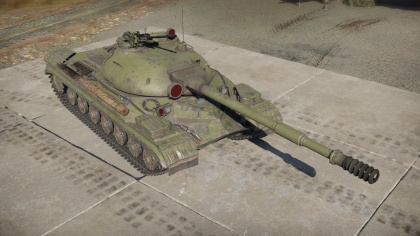 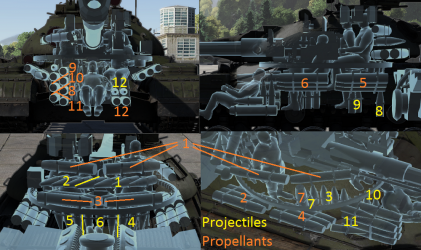 Stalin's death in 1953 brought forth a political situation of De-Stalinization to eradicate the influence of the late Soviet leader. Due to this, the IS-8 heavy tanks that take its first two letters from the name of Joseph (Iosef) Stalin was renamed to the T-10. Production of the tank continued, but with implemented improvements. The T-10A model introduced a newer 122 mm D-25TS gun with a vertical stabilization system and a bore evacuator, with a rammer implemented inside the tank to ease with the loading process by helping the loaders push the rounds into the breach. The T-10's sole telescopic sight was replaced with two new sights, one periscopic and one telescopic. There was also a night-vision device and gyrocompass installed for the gunner. The next upgrade was the T-10B in the mid-1950s, which introduced a two-axis stabilization for the gun and new fire control sight inside with little changes outside. The final revision was with the T-10M in 1957, with the most notable difference being the new M-62-TS gun, which was longer than its previous iterations and presents a very unique multi-slotted muzzle brake and bore evacuator along with having a stabilization system. DShK heavy machine guns were also replaced with the newer KPVT machine guns, which benefited by being similar in ballistic characteristics with the M-62-TS gun to double as a range-finder. Another change in the T-10M was the improved 750 hp engine. The last reported change to the T-10 design was in the 1960s when the tanks went through a rebuild with a new transmission and main clutch.[1]