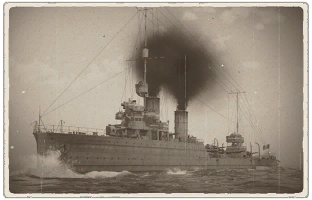 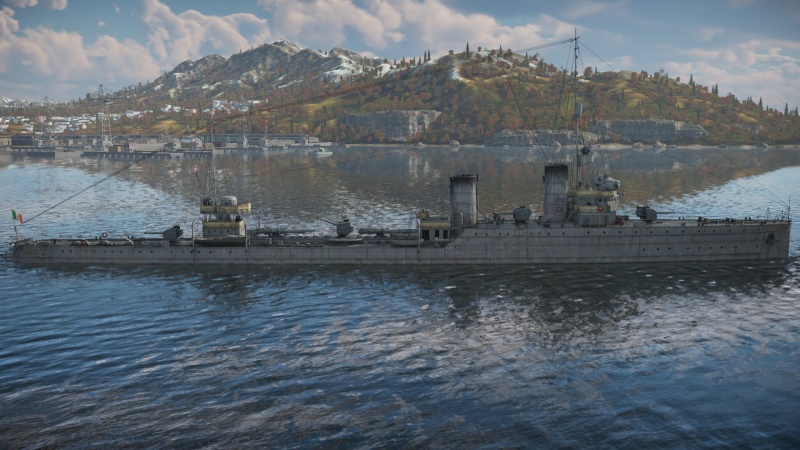 The Leone-class, RN Leone, 1938 is a rank III Italian destroyer with a battle rating of 4.3 (AB/RB/SB). It was introduced in Update "Direct Hit".

The Leone was originally designed as an "esploratore" (scout cruiser). As such, she is significantly larger than contemporary destroyers of the early 1920s and carries a heavy gun armament at the expense of less torpedoes. Despite her design preceding the Comandante Margottini and Corazziere by some 20 years, she is a larger and more heavily armed ship, and thus comes after them in the Italian bluewater tech tree.

The Leone has no armour whatsoever other than 12 mm plating partially protecting her main gun mounts.

The Leone has a crew of 206 men, which is slightly smaller than that of the preceding Corazziere.

The Leone is somewhat slower than her immediate predecessor, Corazziere, and also has poorer handling and acceleration characteristics due to her greater length and bulk, although they are still acceptable.

The Leone has a heavy gun armament (for a destroyer) of eight 120/45 Canet-Schneider-Armstrong Mod. 1918/19 main guns. These fire the same shells as the 120/45 OTO Mod. 1926 guns on the Italian reserve destroyer Turbine and have generally identical performance to them as well. They are distributed in four twin mounts, one in the bow, one in the stern, and the other two amidships. Three of these mounts have unlimited traverse, but the one sited between the funnels cannot be traversed fully because of the fore funnel blocking the guns. The guns have a fairly low rate of fire of only 7 rounds/minute maximum with an aced crew.

The 120 mm guns fire HE, HE-DF, and APHE shells. The HE (and identical HE-DF) shells have a large filler for a 120 mm shell at 2.39 kg of TNT, which is significantly more than those of the newer 120 mm HE shells used by the Dardo and Corazziere and even the larger 135 mm HE shells of the Comandante Margottini, Attilio Regolo, and Etna. However, her APHE has less filler than the APHE on those other ships. HE-DF explodes at the range set by the rangefinder, primarily for anti-aircraft usage, but the limited gun elevation makes the main guns quite hard to use in the anti-aircraft role.

The Leone sacrifices torpedo armament for heavier main gun armament. With a large salvo of eight fairly powerful HE shells, she can deal a substantial amount of damage to opposing destroyers with a single salvo. However, the low rate of fire of the main guns also mean that she cannot really compete in a prolonged duel against fast-firing destroyers (particular the American ones with 5"/38 main guns), and despite her larger size she actually has a smaller crew count than the Corazziere and Comandante Margottini. Furthermore, her partially exposed bow ammunition magazine is a dangerous weakness, especially in close range fights.

Her torpedo armament is very poor, with only four fairly underwhelming 533 mm torpedoes that are not particularly fast and that have a very short range of only 4 km without the torpedo mode installed. It is worth considering not bringing them at all, especially since they are a potential hazard if hit by enemy fire.