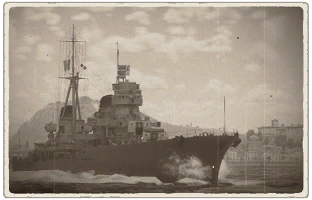 The Eugenio di Savoia is a Duca d'Aosta-class cruiser, a member of the fourth group of the Condottieri-class of Italian light cruisers. She has improved armour protection compared to her predecessor, the Raimondo Montecuccoli, while still maintaining the same armament and speed.

The RN Eugenio di Savoia carries 6 torpedoes, 3 on either side of the ship.

Located amidships is a catapult with one Ro.43 scout plane which provides unique offensive and defensive abilities, expanding tactical options. Ship-launched scout planes fly just like regular tree units but lack munition choices and cockpit views. The Ro.43 is a 2 seater equipped with two fixed offensive light machine guns and a single defensive machine gun turret, but no bombs. It does have the scout plane ability to cap zones and lay down smoke cover (up to 3 times). Captains will be wise to remember to utilize the aircraft and consider when best to use it, for example to cap a point early or late in the match, to create a smoke screen to stymie enemy bombardment and repair, to attack enemy units directly, or perhaps something completely new!