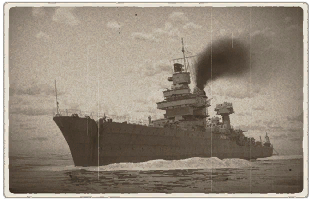 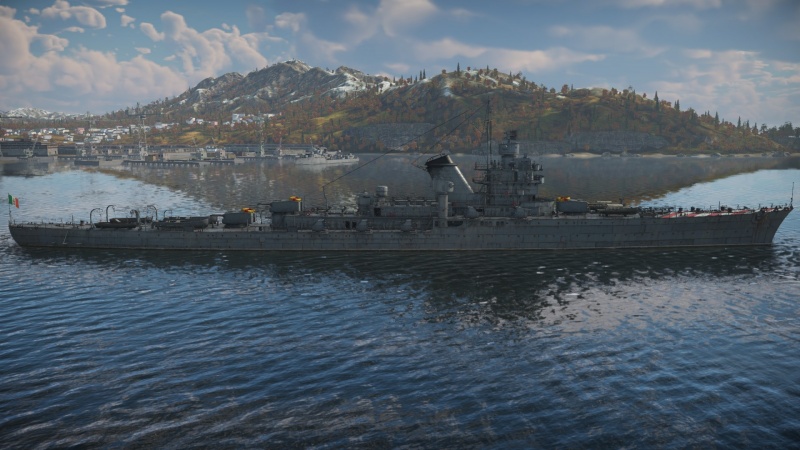 The Etna-class, RN Etna, project is a rank III Italian light cruiser with a battle rating of 4.7 (AB/RB/SB). It was introduced in Update "Ixwa Strike".

Originally commissioned for the Royal Thai Navy in 1938 as the leading ship of the two Taksin-class light cruisers, HTMS Taksin unfortunately never made it to Thailand due to Italy's urgent need for raw materials and thus were confiscated in 1942. Under her new ownership, Taksin was renamed Etna. Unfortunately, Etna and her sister ship were never completed due to Italy's surrender in 1943 and were subsequently scuttled by the Germans.

Due to Italy's increasingly dire situation in the Mediterranean, the ex-Taksin's original planned armaments, which primarily consisted of six 150 mm Bofors cannons and six Japanese 450 mm Type 4 torpedoes, were scrapped in favour of turning the ship into an anti-air cruiser to be equipped with several smaller rapid-firing cannons. The Etna featured in the game is thus depicted in the Regia Marina's planned configuration.

The RN Etna is a unique ship as it isn't easily comparable to other ships. She's a great ship at her battle rating, with her bow and stern protected by 20 mm of RHA and citadel protected by 60 mm. This allows shots up to 152 mm HE to be blocked, while SAP or APHE are able to penetrate but do not cause much damage; many fragments will most likely be countered by the 25 mm RHA internal armour that separates the amidships.

Furthermore, nearly all critical components are together with the armour below sea level. The ship is 146 meters long, 21 meters wide and 7.4 meters deep. While the ship is quite long, it still is quite manoeuvrable thanks to its width. The draft is not very deep with it only being 5.79 metres, which further increases the manoeuvrability.

The Etna is crewed by 580 sailors and is her main source of durability. Meanwhile, her contemporaries at the same battle ratting have:

As with many ships, getting a good shot just under the front turret detonates the ammo rack and incapacitates most of the crew. Another possibility is setting the engines & fuel storage ablaze, slowing the ship down in the process. While most cruisers at Etna's battle rating are equipped with torpedoes that can detonate and do as much damage as an ammo rack explosion, the Etna isn't equipped with those.

The maximum forward speed of the ship is 28 knots while the maximum reverse speed is 13 knots. The rudder can turn from one end to the other in 8 seconds. In case of danger, the Etna can make a U-turn in 1 minute 32 seconds. As the Etna is a converted long transport ship, it certainly does not help avoid enemy strikes and much less any torpedoes. Two Sulzer 12-ZAV-40S engines with a power of 11,600 hp propel this 7000-ton ship at a maximum speed of 28 knots.

These weapons were designed to give about the same range as the 12 cm/50 (4.7") guns but with a lower muzzle velocity and less dispersion. In fact, partly due to the wider barrel spacing used on the mountings, these guns had only a quarter of the dispersion of the 12 cm guns.

They were used on the battleships Andrea Doria and Dulio as a secondary weapon and the Capitani Romani-class light cruisers as the main weapon. It had been intended to mount these weapons in the Comandanti Medaglie d'Oro and Etna classes in a new AA mounting, but these ships were not completed.

Etna's 135 mm has 7.5 seconds reload and its rating is not bad at all, compared to the 14 seconds of the Bartolomeo Colleoni and Krasny Kavkaz. The shell choice is not the best, but they are respectable: the HE has 1.8 kg (39.6 lbs) of explosive mass and total penetration of 23 mm, the APHE comes with 1.4 kg (30.8 lbs) and explosive and manage to penetrate 174 mm of armour and to finish has the HE-TF with the same amount of explosive as the HE. Talking about the ballistics, the Etna is found with quite slow shots compared to the above-mentioned ships. The HE, APHE, and HE-TF reach a speed of 825 m/s, which does not help much in long-distance flights.

For this ship, it is recommended to use the APHE shells as they are much more effective than the common HE, although using the APHE for all targets is not really indicated, for example, against destroyers or ships with thin armour HE is perfect. Due to the low speed of the shells, fighting beyond 10 km (6.2 miles) is not recommended as the guns will be less effective.

Ansaldo and Terni developed this medium-range AA gun during World War II with some prototypes being completed, but it did not enter general service use. The loading equipment was electrically powered and included dual loading trays and a pantograph linkage rammer.

The Etna is equipped with 10 Ansaldo-Terni 65 mm cannons that with their reload of only 2 seconds does an important job for the ship, for example, they keep away smaller ships that try to board you or they can be very effective against larger aircraft that do not yield with anti-aircraft defences. The 65 mm can be armed with 2 different types of projectiles, HE and HE-TF, with 450 g (0.9 lbs) of explosive filler.

As previously mentioned the HE shells are handy to annoy larger ships by creating fires or destroying modules, while the HE-TF is very intuitive to use, they are very effective against aircraft, especially larger ones.

The Scotti-Isotta Fraschini 20/70 was a multi-role weapon, which could be used as both an anti-aircraft and anti-tank function, available in both land and naval gun barrels. Development of the weapon began in 1928, by designer Alfredo Scotti,

The weapon employed the automatic recoil operation system, with a fixed barrel and geometric block of the bolt removed by gas action.

The Etna has at its disposal as many as twenty-one 20 mm anti-aircraft guns, of these, six are positioned at the front of the ship, just below the cockpit while the remaining fifteen are arranged evenly in the central part of the ship. These 20 mm cannons have 1500 rounds of ammunition each and reload in 2.9 seconds. They are very effective against aircraft and can cause not inconsiderable damage to small ships. They have a maximum range of 3.5 km (11482 ft) and maximum effectiveness of 1.8 km (5905 ft) against both air and surface targets.

As most light cruisers, the Etna is lowly ranked for a cruiser and it's best played in a supportive role and make use of the sheer amount of anti-aircraft cover. The Etna's 21 anti-aircraft guns will make quick work of any enemy planes attempting to sink the Etna or her surrounding fleet.

For multiple reasons, it's best to keep the ship slightly angled towards the enemy fleet allowing to make use of her armour and keeping her guns trained on target because the back turrets don't have full 360° rotation.

Destroyers and coastal water vessels will not do a lot of damage to the RN Etna. Most of these ships will be nothing more than an annoyance to the Etna and can be cleanly sunk back to the hangar with a well-aimed salvo.

Beware that the RN Etna's turrets only offer up to 6 mm armour protection; this is very weak, and any machine gun knockout the sailors inside of these modules. This means a few HE rounds will destroy RN Etna primary weaponry, which would leave RN Etna vulnerable to attack.

The Etna class was a class of light cruisers of the Italian Royal Navy, composed of two units launched between 1941 and 1942.

The two units were ordered in 1938 by the Government of Thailand to the CRDA shipyard in Trieste as Taksin class, and their construction began in August-September 1939. After the outbreak of the Second World War, the Italian government considered the possibility of requisitioning them for use with its own navy, but the decision was formalized only in August 1942 with much delay; it was decided to complete the two ships, launched but not yet fitted out, as anti-aircraft cruisers for the escort of supply convoys, but work proceeded very slowly and in June 1943 were suspended with the units still largely incomplete.

In September 1943, the Germans captured the two hulls in Trieste, but no effort was made to complete them; self-sunken in May 1945, they were refloated and then scrapped immediately after the war.

Hull dimensions and propulsion system were kept identical to the previous ones. Still, all the original armament, as well as the aeronautical arrangements, were landed and replaced by new systems: the main armament would have been six 135/45 mm OTO/Ansaldo cannons, arranged in three newly designed twin towers (always one forward and two aft overlapping) equipped with an elevation such as to allow the use of the pieces both in anti-ship and anti-aircraft fire; always in anti-aircraft function would have been embarked six Ansaldo 65/64 mm cannons in single installations (a new model still being developed, then never entered service), as well as six twin installations of Breda 20/65 Mod. 1935. The rearrangement of the internal spaces led to four cargo holding capable of holding up to 1,000 soldiers or 500 tons of materials; there were also two small cranes at the bow and stern for cargo handling.

The construction of the two units proceeded very slowly, both because of continuous reconsiderations on their design and the difficult war situation in Italy. In June 1943, it was decided to suspend the preparation. In September 1943, at the time of the armistice of Cassibile between Italy and the Allies, the completion of the two units was far from being finished, being only about 60-65% of the work. The two incomplete hulls fell into German hands at the time of the occupation of Trieste on 10 September 1943, but no effort was made to complete the two units; both, therefore, ended up self-sunken in May 1945 in Trieste at the time of the surrender of the German forces, being later salvaged and scrapped in 1948.