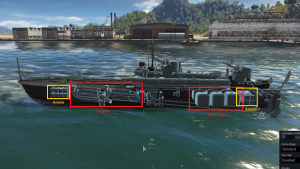 The Pr. 123bis was the first variant of the Pr. 123 series of motor torpedo boats built by the Soviet navy during and shortly after the Second World War. Originally intended to carry a single machine gun mount, the ship was instead fitted with two 12.7 mm machine gun turrets and two heavy torpedo tubes. As well, the ships were fitted with American Packard-built engines, enabling a higher top speed. The Pr. 123bis was produced from 1942 - in total, 118 ships were built before the ship was replaced by the later Pr. 123K.

The Pr. 123bis was the first major upgrade of the original Pr. 123 design. The ship was considerably improved over the original Pr. 123 in several ways. The most noticeable addition was the installation of a second dual 12.7 mm DShK machine gun installation on top of the deckhouse, which offered a dramatic increase in firepower compared to the original Pr. 123. As well, the ship used lend-lease Packard aircraft engines imported from the United States, each developing 1200 hp. Despite the heavier engines, the ship was actually slower than the Pr. 123, as the added weight of the weapons and equipment weighed the hull down.

The first Pr. 123bis was built in 1942, and was accepted for production shortly thereafter. Being constructed by Plant No. 639 in Tyumen, a total of 118 ships were built. The first ship entered service in 1944, while the last boats were accepted in service in 1955. Many Pr. 123bis boats were exported to Warsaw pact allies. In service, the Pr. 123bis was complemented and succeeded by the more advanced Pr. 123K, featuring improved systems and armament. The last Pr. 123bis ships were retired in the 1970s and 1980s, replaced by more modern torpedo boats and small ships.