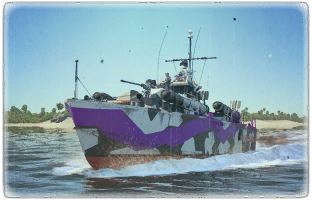 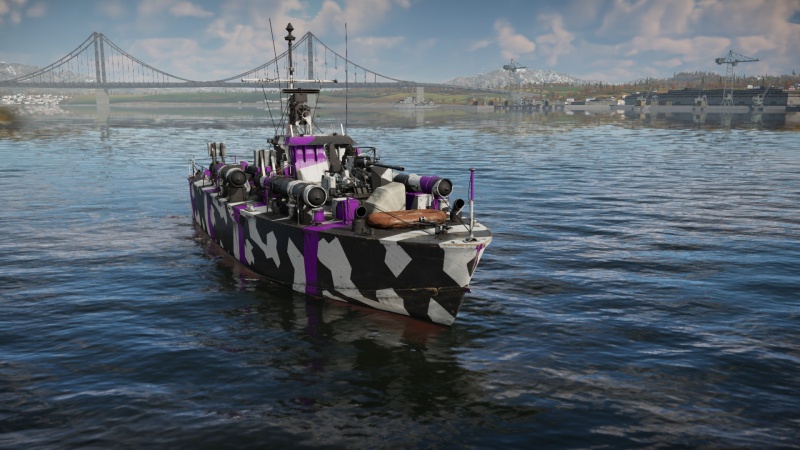 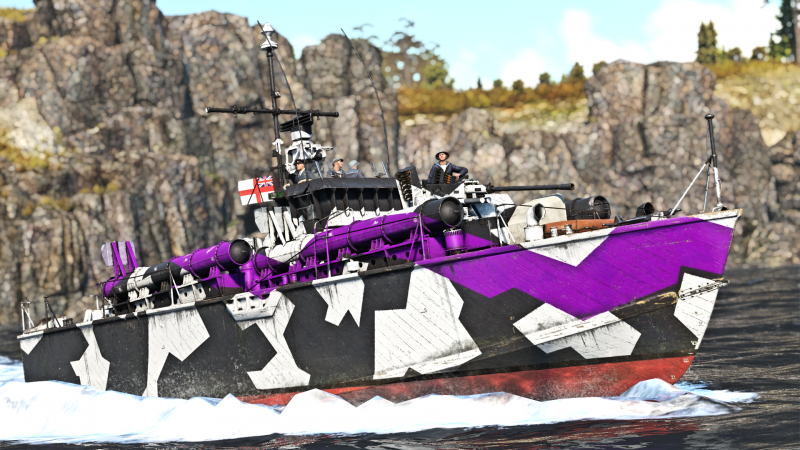 The Dark-сlass, Dark Aggressor (FPB 1102) TD is a gift rank III British motor torpedo boat with a battle rating of 2.3 (AB/RB/SB). It was introduced during Update "New Power" as a reward for watching War Thunder streams on Twitch.tv along with a unique skin for the vehicle.

Dark Aggressor has no armour at all, lacking even a gun shield for the main cannon. Right beneath the gun are also two large ammunition racks. These cannot be removed unless all ammo for the main gun is emptied. Altogether, with a crew complement of only 15, Dark Aggressor's survivability is low.

On top of this, being a small boat, she can be hull-broken by any gun with a diameter above 4 inches (102 mm). At Dark Aggressor's battle rating, there are three guns capable of hull-break: the 8cwt QF Mk I (114 mm) (found on Dark Adventurer), the 10.5 cm SK C/32 (found on AF D3), and the 120 mm/45 Type 3 (found on Syonan). Luckily for Dark Aggressor, though, the first two are quite rare to see and are mounted on vehicles that are easily knocked out themselves, and the third is a rather bad cannon that most players don't even use. This makes hull-breaks fairly rare.

All things considered, aside from the ammunition racks in the bow, Dark Aggressor's survivability is more or less average. Low survivability and the ability to be hull-broken are the norms for most boats at this battle rating, and really shouldn't be looked at as a disadvantage on the part of Dark Aggressor.

In her primary armament group, Dark Aggressor has a single 40 mm QF Mark VII in a single mount just in front of the bridge. It has 1,500 rounds of ammunition available for it. It can traverse horizontally at a rate of 40°/s and vertically at a rate of 34°/s. The gun has a magazine capacity of 4 rounds and has a rate of fire of 160 rounds/min. With a stock crew, the gun can be reloaded in 0.49 seconds; with an aced crew, it can be reloaded in 0.38 seconds. Firing the gun for too long will cause it to jam. Its maximum range against surface targets is roughly 3.25 km.

Dark Aggressor has four torpedo tubes, two on each side, and can carry a total of four 533 mm Mk.VIII torpedoes. The torpedo tubes are pointed forwards, but are angled outwards on each side. They are fixed, requiring the boat to be turned in order to aim them.

The Dark Aggressor can carry two Mk.VII depth charges mounted on the aft, one on each side facing outwards. The depth charges drop one-at-a-time in the following order (see the image):

From arcade battle experience, AP rounds are more versatile in battle and are the better choice in most situations, especially when engaging surface targets of similar size within tier 2 and always try to resolve direct fights as quickly as possible (either by winning or disengaging as quickly as possible). This boat is best used when outranging, flanking or ambushing the opposition given the facts it possesses poor armour, but the gun can sustain long periods of continued fire therefore, strafing targets is encouraged.