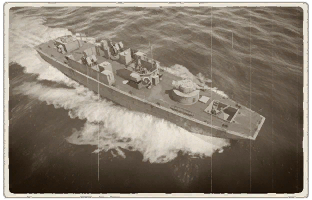 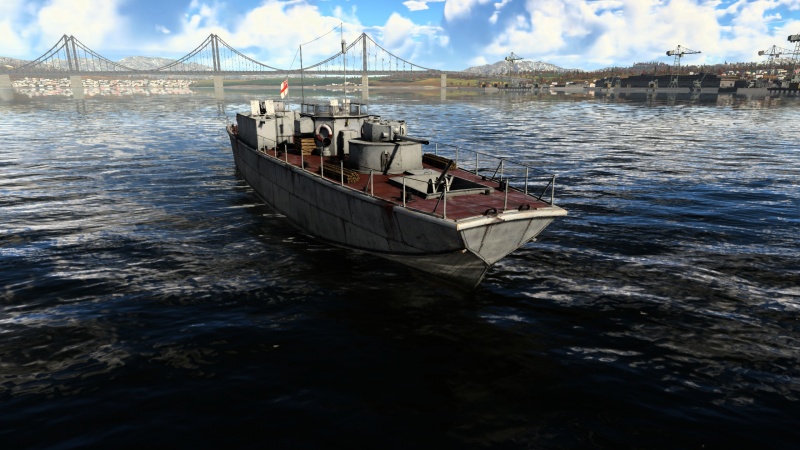 The Fairmile H LCS(L)(2) is a rank III British motor gun boat with a battle rating of 2.3 (AB/RB/SB). It was introduced in Update "Direct Hit".

While the Valentine turret itself is armoured and that has some utility, the magazines beneath it are not, nor is anything else on the ship. Moderate size and amounts of open space have marginal utility, but other peers survive on mobility.

The boat's mobility is very poor, with such a low top speed, the mediocre acceleration (~19 seconds to top speed, ~16 seconds to stop, ~26 seconds to reverse from full speed) doesn't even allow a user of this boat to reverse out of danger quickly, nor does the turning radius. It is likely any positioning mistakes will be punished greatly. There isn't a saving grace, but if there was one it would be relative stability at flank speed.

The 6pdr gun has unique access in the coastal tree to armour-piercing rounds. While the HE rounds have minimal effectiveness, mostly due to the low rate of fire (most other 6pdr guns in the coastal tree are semi-automatic), be sure to utilize the AP capability to the maximum, hitting vital modules and tougher targets.

The two 20 mm cannons have limited utility against ships, but are useful in an AA role.

The two .50 cal machine guns are almost no use on their own, but combined with the 20 mm cannons, they're useful in an AA role, though their range is minimal.

The 4.2-inch mortar is practically useless, stuck to a 1 km firing range, taking forever to reach its target, and doing minimal damage when it arrives.

Due to the slow speed and armour, trying to stick with the team is important. If you're in trouble or make a positioning mistake, low speed will give opponents plenty of opportunity to punish users of this vehicle. Soviet armoured boats can be tough for the rest of the team to deal with, having armour to stay protected with good enough mobility to avoid being hit by torpedoes, so be on the lookout for those. Also consider taking the role of an "AA barge," targeting aircraft outside 45° either side of the bow, even the 20 mm turrets can have difficulty targeting aircraft in the forward arc. Dashing from cover to cover is key in any boat, but taking the most efficient path is necessary to survival in such a slow boat. Consider choosing the right moment with support before moving out of cover. Utilize sight lines to the maximum and consider going for close-range ambushes. The boat's effectiveness at close range but inability to close that range easily make it a tricky one to play well.

Against Soviet armoured boats, the Pr.191, Pr.191M, and Pr.1124 early, and Pr.1124 late, knock out the turrets then proceed to the magazines or bridge. Against the MBK pr.186 or MBK-161 late or similar heavier boats, you'll need a near enough point-blank and square shot on the side of the turrets to knock them out. Consider hitting the magazines, above the waterline but below the turrets.