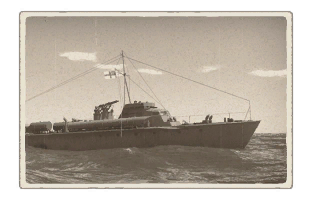 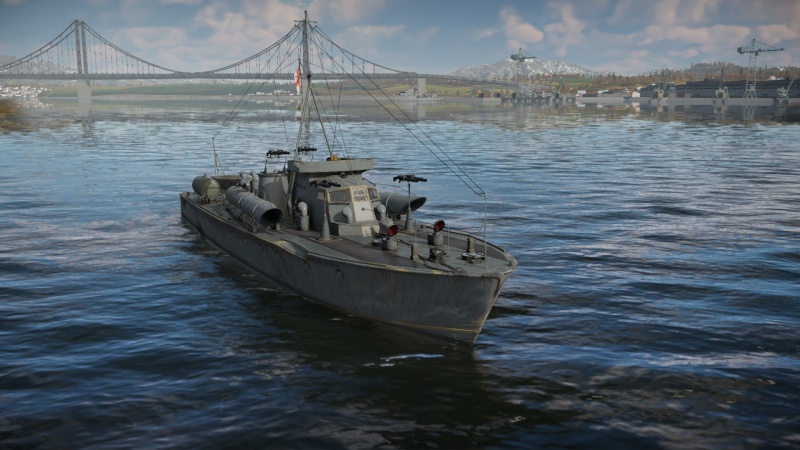 The MTB Vosper 1 series is a rank I British motor torpedo boat with a battle rating of 1.0 (AB/RB/SB). It was introduced in Update 1.83 "Masters of the Sea" as part of the British fleet closed beta test. With the split of the naval tech trees in Update "New Power", MTB Vosper was moved to the coastal fleet tech tree. 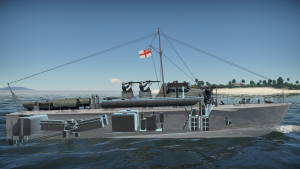 Any gun in the game will easily be able to penetrate the hull and superstructure at any range.

The hull is split into three compartments. Starting from the bow and working towards the stern, the first compartment starts at the bow and ends in front of the bridge; the second ends behind the aft gun mounts, just after the fuel tanks; and the third ends at the stern.

MTB Vosper can be hull-broken by any round with a large enough diameter and explosive mass. In general, this is limited to HE rounds greater with a diameter greater than or equal to 4 inches (102 mm) with an explosive mass greater than 1.5 kg. At MTB Vosper's own battle rating, there is only one gun capable of hull-breaking her:

There is one ammunition storage that holds ammunition for all gun mounts. It is located directly below the bridge, just above the waterline. Destroying it will instantly destroy MTB Vosper.

MTB Vosper has a crew complement of 10. With a stock crew, it is knocked out when 6 crew are lost; with an aced crew, this is increased to 7. Overall, the survivability is average.

MTB Vosper has a displacement of 38 tons. 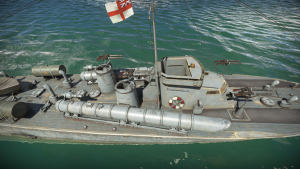 MTB Vosper gun turret placements. The two mounts behind the bridge are staggered to not obstruct each other when firing to the sides.

The primary armament consists of eight 7.72 mm Lewis 1916 machine guns in four twin mounts. Two of these are mounted side-by-side in front of the bridge with the other two staggered behind the bridge. There are 1,940 rounds of ammunition available for each mount, 970 rounds per gun, for a total of 7,760 rounds. Stock, the mounts can traverse horizontally and vertically at a rate of 64°/s; with the "Primary Armament Targeting" modification installed, this is increased to 75°/s. Each gun has a magazine capacity of 97 rounds and a cyclic rate of fire of around 550 rounds/min. With a stock crew, the guns can be reloaded in 10.4 seconds; with an aced crew, they can be reloaded in 8 seconds.

While the armour-piercing round and the incendiary tracer round deal about the same amount of the damage, the standard tracer round deals incredibly little damage to both surface targets and aircraft. Because of this, the AP belt is a strict upgrade from the default belt. Compared to the AP rounds, the IT rounds also have a much higher muzzle velocity. Altogether, this makes the API belt the best overall, due both to its lack of standard tracer rounds and better ballistic properties.

MTB Vosper can carry two 533 mm Mk.VIII torpedoes. The torpedo tubes are located on either side of the bridge, pointing forwards with the nose angled outwards.

In RB, always set the depth stroke to the minimum 1 m setting, since most vessels that MTB Vosper can face will not have a deep enough draught to fuse the torpedo at a depth stroke setting of 4 m. In AB, depth stroke is automatically set to the most optimal setting.

In terms of armament, MTB Vosper is very similar to the reserve vessel of the tech tree, MTB-1(1), the difference being in the placement of the guns. While MTB-1(1) has the eight guns split into two quadruple mounts, MTB Vosper has them in four twin mounts. With this arrangement, MTB Vosper can typically only bring four or six of her eight guns on target at once, since the mounts block each other at most angles. Although there is a small ~7.5° arc about 60° to port (between the 9 and 10 o'clock positions) where all eight guns can be used at once, it's difficult to keep targets in such a small range, so this shouldn't be relied on. Because of this, MTB Vosper is limited to only a fraction of the firepower of MTB-1(1), whose armament wasn't very good to begin with. That said, this gun arrangement does come with a few benefits, the most significant of which being the much quicker reloads, nearly half of that of MTB-1(1). Additionally, having twin mounts instead of quad mounts also makes each individual mount smaller, reducing the likelihood of losing a turret to random fire and making it less detrimental should it happen.

Even with these differences, though, MTB Vosper has nearly the exact same playstyle as MTB-1(1) due to the limitations of the guns. Because of their bad damage output, always keep enemies in directions where six of the guns can fire. Similarly, because of their poor ballistic qualities, stick to close-range engagements and avoid open areas of the map wherever possible. Make use of MTB Vosper's higher top speed to rush into ambush positions behind cover that MTB-1(1) would be too slow to reach. From there, support your team by targeting distracted enemies. For larger opponents such as sub-chasers, try not to draw attention to yourself with gunfire. Instead, either use the torpedoes, or simply mark them on the map for your team, call artillery, and then retreat behind cover.

Despite the reloads being shorter than that of MTB-1(1), they are still quite long overall, so it's still a good idea to be proactive with the reloads. Always be aware of how much ammunition is left in the guns and fire off any remaining ammunition if there isn't much left after engagements, retreating to do so if necessary. Like MTB-1(1), a good time to do this with MTB Vosper is when the magazines are about half empty, though it may not always be obvious when that is just from the ammunition counter, since not all of the guns can fire at once. The guns can only sustain fire for about 10 seconds before needing to reload, so make use of that to determine the amount of remaining ammunition by mentally keeping track of how long you've fired the guns. Lastly, like MTB-1(1), MTB Vosper can only carry enough ammunition for ten reloads at most, though again just like MTB-1(1), MTB Vosper also doesn't tend to survive long enough for this to become an issue, so keep that in mind but don't worry too much about it.

During the 1930s, the Admiralty began to reestablish the coastal boat flotillas it once commanded during the First World War. British boatbuilding company Vosper & Company competed for the contract but lost both times in 1935 and 1936, the lucrative contract to build the first coastal boats since WWI going instead to their rival, British Power Boat Company. In response to this, Vospers developed plans for a faster and more seaworthy design than that of their rivals. In the following months, Vospers proposed their new design to the Admiralty multiple times, but ultimately, they could not secure a contract to build a prototype. Around this time, though, the Admiralty officials had unofficially suggested that future contracts would only be awarded for vessels that could surpass 40 knots in speed and that were armed with two 21-inch torpedoes as well as an assortment of light anti-aircraft guns. Additionally, it was known from previous specifications that the Admiralty wanted a vessel capable of operating in open waters in at least Force 5 winds and that was fast enough to cross the English Channel during the night. With these unofficial specifications, Vospers preemptively began development on a new vessel as a private venture at the company's own expense.

Immediately, it was decided that the private venture vessel had to be larger than the existing 60 ft British Power Boat MTB in order to meet the specifications. Additionally, engines more powerful than the Napier Sea Lion engines used in the BPB design were required. With none available domestically, Vospers looked to the Asso 1000 engine by Italian manufacturer Isotta-Fraschini. Though in limited supply, the Asso 1000 was specifically designed for marine craft and provided the necessary power: 1,150 bhp at 1,500 rpm maximum and 950 bhp at 1,660 rpm continuous. In late 1936, Vospers completed their design. It called for three Asso 1000 engines and two in-house 75 bhp auxiliary engines, the latter of which could be coupled to the outer shafts to give a total maximum power of 3,600 bhp. The hull-form was a hard chine planing design and was 69½ ft in length with a displacement of about 33 tons. The prototype was laid down before the end of the year and completed in May 1937.

Upon completion, the prototype underwent internal trials where she achieved a top speed of 47.8 knots unloaded and 43.7 knots loaded. Satisfied with these results, Vospers presented the prototype to the Admiralty for official trials against the 60 ft British Power Boat MTB. The prototype fared favorably, and after much deliberation, the Admiralty decided to purchase the vessel from Vospers. She was commissioned in May 1938 as MTB 102 and sent to HMS Vernon for further evaluation. Up to this point, MTB 102 had not actually been fitted with torpedoes, so during her time at HMS Vernon, many torpedo configurations were tested. These included the tried-and-true yet outdated stern projection systems, as seen on the 60 ft British Power Boat MTB and earlier WWI designs, as well as a unique arrangement of a single launcher in the stem of the hull with a reload carried internally. These all had their own issues, and none were found to be satisfactory. Ultimately, it was decided that MTB 102 should have two torpedo tubes mounted on either side of the bridge, pointed forwards with the nose angled outwards, an uncommon configuration for the time. Around this time, the gun armament had also not yet been decided, so various configurations were also experimented with, including combinations of 0.303 in and 0.50 in machine guns and a 20 mm autocannon.

Impressed with MTB 102, the Admiralty placed an order for four more vessels on 15th August 1938, Vospers' first-ever Admiralty contract. These vessels, and any ordered after, all shared the same overall design as MTB 102, although with several minor changes such as the hull being lengthened to 70 ft 3¼ in. After 1940, with the entrance of Italy into the war, Isotta-Fraschini engines could no longer be obtained, and subsequent boats had to be fitted with much weaker American Hall Scott engines—only 1800 bhp total—as a stopgap measure until they could be upgraded with more powerful Packard engines, although this wasn't until 1941 as supply was limited. Of the 32 planned 70 ft Vosper MTBs, 28 were completed and are as follows:

The 70 ft Vosper MTB design continued to receive many improvements and modifications order-to-order and would lead to the development of the 72 ft Vosper MTB and 73 ft Vosper MTB.