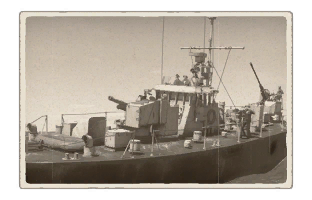 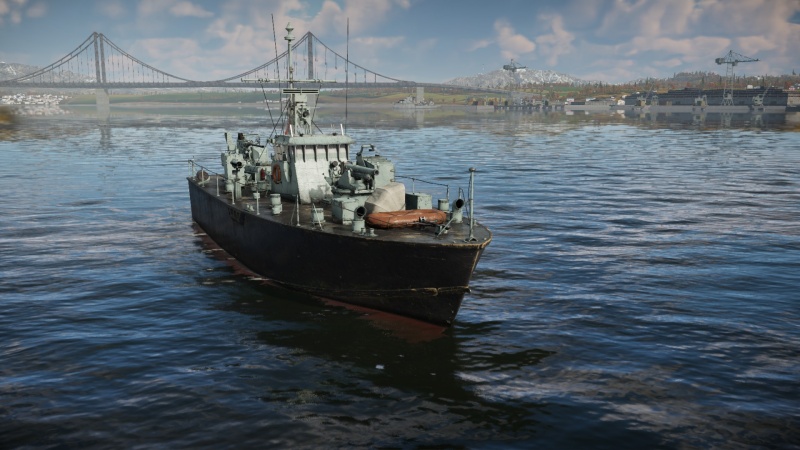 The Dark-class, Dark Adventurer (FPB 1101) is a rank II British motor gun boat with a battle rating of 2.0 (AB/RB/SB). It was introduced in Update 1.83 "Masters of the Sea" as part of the British fleet closed beta test. With the split of the naval tech trees in Update "New Power", Dark Adventurer was moved to the coastal fleet tech tree. 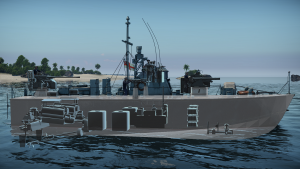 Dark Adventurer internals (starboard side). Note the ammo racks below the forward gun.

Like most coastal vessels, Dark Adventurer has no practical armour. The gunshields are largely superficial; while they may stop low-calibre machine guns, heavy machine guns and cannons will easily penetrate them at any range. The hull and superstructure are unarmoured and will not stop any sort of gunfire.

There is one ammunition storage that holds ammunition for both the primary and secondary gun turrets. It is located directly behind the forward gun turret just above the waterline. Destroying it will instantly destroy Dark Adventurer.

Dark Adventurer has a crew complement of 15. With a stock crew, Dark Adventurer is knocked out when 10 crew are lost; with an aced crew, this is increased to 11. Overall, the survivability is average.

Dark Adventurer has a displacement of 64 tons.

The primary armament consists of a single 114 mm 8cwt QF Mk I cannon mounted forwards, with a maximum ammunition load of 100 rounds. Stock, the mount can traverse horizontally at a rate of 26°/s and vertically at a rate of 21°/s; with the "Primary Armament Targeting" modification installed, this is increased to 30°/s and 25°/s respectively. The gun is single-shot with a nominal rate of fire of 12 rounds/min. With a stock crew, it can be reloaded in 6.5 seconds; with an aced crew, this is decreased to 5 seconds.

There is only one ammunition type available:

The 114 mm HE round is able to hull break most coastal vessels smaller than sub-chasers.

The secondary armament consists of a single 40 mm QF Mk VII cannon mounted aft with a maximum ammunition load of 1,500 rounds. Stock, the mount can traverse horizontally at a rate of 34°/s and vertically at a rate of 29°/s; with the "Auxiliary Armament Targeting" modification installed, this is increased to 40°/s and 34°/s respectively. The gun has a magazine capacity of 4 rounds and a cycle rate of fire of 160 rounds/min. With a stock crew, it can be reloaded in 0.49 seconds; with an aced crew, this is decreased to 0.38 seconds. The reload is short enough that there is a seamless transition between magazines, although continuously firing for too long will cause the gun to overheat and jam. This happens after continuously firing for about 1.25 min, or about 200 rounds. There is no noticeable drop in accuracy as the gun overheats. 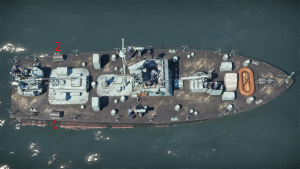 Dark Adventurer's main armament, the 114 mm 8cwt QF Mk I, is one of the largest calibre coastal fleet weapons in the game and fires the single strongest HE round of any coastal vessel, allowing it to knock out anything smaller than a sub-chaser. Guns that can hull break are very rare in the coastal fleet, and Dark Adventurer is, by far, the lowest BR vessel equipped with one. However, against sub-chasers and other larger vessels, the damage is lacklustre, often requiring multiple hits to destroy a single hull segment. Additionally, the terrible muzzle velocity and very poor ballistics make the gun difficult to use in practice, with it only really being effective against stationary targets or at very close ranges, within 500 m at most. Additionally, while the muzzle velocity is bad, it isn't quite bad enough to allow the 8cwt QF Mk I to fire from behind cover. Because of this, and despite the knock-out potential, the 8cwt QF Mk I is simply outclassed by the secondary 40 mm QF Mark VII in the vast majority of situations.

In battle, make the most of the QF Mark VII by switching to manual control with Alt+2. The best advantage of the QF Mark VII over many other coastal weapons is its seamless reload. Without having to worry about reloading, vessels equipped with these types of weapons can be played much more aggressively. However, on Dark Adventurer, the gun is mounted aft, which limits its versatility by preventing it from firing forwards and increasing the time needed to traverse the gun from one side to the other. While being mounted aft does come with some benefits—mainly, it gets destroyed less often—this is an overall net disadvantage and limits Dark Adventurer's effectiveness in comparison with vessels with forward-mounted guns, like Dark Aggressor.

Because of this, try to not be the first to rush into action and avoid meeting enemies head-on as much as possible, since it takes some time to turn the hull to get the QF Mark VII on target. Instead, flank the enemy and try to get into ambush positions behind cover. Once in place, turn the hull around so that the stern is facing towards the enemy and use the QF Mark VII to make short work of anything that passes by, prioritizing armoured targets if possible. Dark Adventurer has a somewhat poor reaction time, so try not to stay in one place for too long to avoid being flanked yourself. Since the hull is already turned around, you can quickly retreat if necessary by using smoke and going forwards. In general, stick to close-range engagements on the flanks with the QF Mark VII, but don't be afraid to switch back to the 8cwt QF Mk I to one-shot tricky opponents either.

While manually controlling the QF Mark VII, there are several things to keep in mind. First, while you don't have to worry about reloads, the QF Mark VII is one of the few weapons that can overheat, causing it to jam after continuously firing about 200 rounds. This is more than enough for multiple engagements, though, and the overheating doesn't have any noticeable negative effect on accuracy as is the case with some other guns. However, you should still pay attention to the overheating and occasionally retreat to let the gun cool off. The second thing to consider is what to do with the primary 8cwt QF Mk I. This gun is completely useless against aircraft, and under AI control, it is practically worthless against surface targets too. Because of this, it's best to just disable the AI gunners. This keeps the gun loaded, level, and forward-facing for when it's actually needed. This ties into the last thing to be aware of, which is that there will be no AI anti-aircraft defense while playing like this, so always look out for aircraft. The AI gunners are very inaccurate against aircraft unless the enemy is coming directly head-on, so don't bother giving control of the QF Mark VII back to the AI gunners; just try to shoot down enemy aircraft manually.

The Dark-class fast patrol boats, also known as the Admiralty Type "A" Fast Patrol Boat (FPB), were 18 patrol boats used by the Royal Navy, with another 8 built for export. The class was originally ordered in the late 1940s, calling for a new diesel-powered FPB, with Saunders-Roe eventually winning the design contract in early 1952. The Dark-class was built between 1954 and 1958 primarily by Saunders-Roe alongside several other British shipbuilding companies. The Dark-class had interchangeable armaments and could be configured as motor torpedo boats, as motor gun boats, or as minelayers. These armaments include:

The Dark-class boats had a length of 71 ft. 8 in., a beam of 19 ft. 5 in., a draught of 6 ft. 1 in, and a standard displacement of 50 long tons and were the first of their kind in Royal Navy service to use diesel engines. Each boat was powered by two 18 cylinder Napier Deltic diesel engines, each producing 2,500 bhp and driving a single shaft, with an exhaust port on the port side hull. The first few Dark-class boats were painted entirely in standard grey. However, the port side of the hulls would quickly become stained by the diesel exhaust fumes, even after only a short period of use. Initially, an experimental paint scheme was tried on HMS Dark Biter (P1104) around March 1956 that had the rear hull painted in black with the front hull still in grey. This, too, was found to be unsatisfactory, and eventually, it was decided that the entire hull of the Dark-class boats was to be painted in black.

Eighteen Dark-class boats served with the Royal Navy. All of these were built with wooden hulls and aluminium decks on aluminium hull frames with the exception of the final boat, the unique HMS Dark Scout (P1116), which had an all-aluminium welded construction, a redesigned bridge, and transom exhaust ports. In addition to these, eight more Dark-class boats were also built for export, all built by Saunders-Roe: two standard boats to Finland; five riveted, all-aluminium boats with an additional electric drive system to Burma; and one standard boat to Japan. A further nine Dark-class boats were planned to be built as well for Royal Navy service, but these were all cancelled in 1955. During the 1960s and 1970s, of the 18 Dark-class boats in Royal Navy service, two were used as target practice with one being sunk. The surviving 17 were sold to various places, including several to Italian law enforcement in the late 1960s.