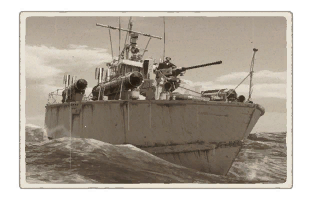 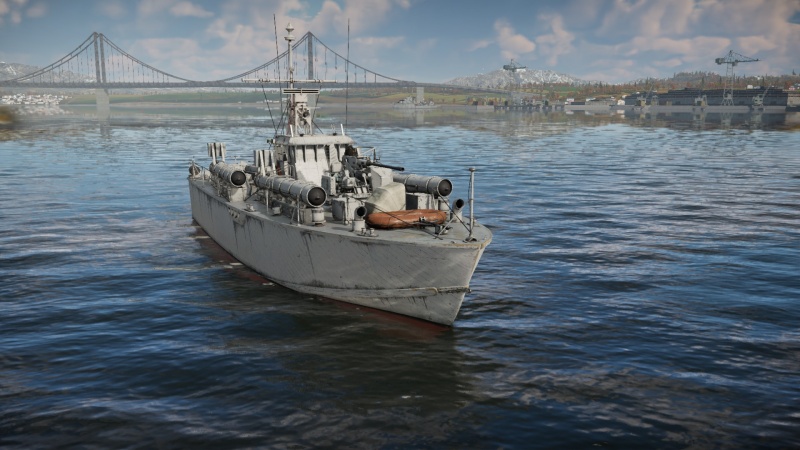 The Dark-class, Dark Aggressor (FPB 1102) is a rank III British motor gun boat with a battle rating of 2.3 (AB/RB/SB). It was introduced in Update 1.83 "Masters of the Sea" as part of the British fleet closed beta test. With the split of the naval tech trees in Update "New Power", Dark Aggressor was moved to the coastal fleet tech tree.

The Dark Aggressor has the following armour layout: 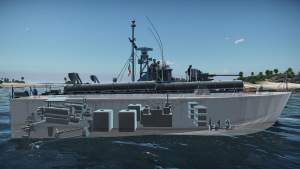 Like most coastal vessels, the Dark Aggressor has no practical armour. The hull and superstructure are unarmoured and will not stop any sort of gunfire.

The hull is split into four hull sections. Starting from the bow and working towards the stern, the first section starts at the bow and ends just in front of the gun; the second ends after the bridge; the third ends where the fuel tanks end, just in front of the engines; and the fourth ends at the stern. Any round with a large enough diameter and explosive mass can hull break the Dark Aggressor. In general, this is limited to HE rounds greater with a diameter greater than or equal to 4 inches (102 mm) and with an explosive mass greater than 1.5 kg. At the Dark Aggressor's battle rating, the only guns that can hull break her are:

There is one ammunition storage located directly underneath the gun turret just above the waterline. Destroying it will instantly destroy the boat.

The Dark Aggressor has a crew complement of 15. With a stock crew, the Dark Aggressor is knocked out when 10 crew are lost; with an aced crew, this is increased to 11. Overall, the survivability is average.

The Dark Aggressor has a displacement of 64 tons.

The primary armament consists of a single 40 mm QF Mk VII cannon mounted forward with a maximum ammunition load of 1,500 rounds. Stock, the mount can traverse horizontally at a rate of 34°/s and vertically at a rate of 29°/s; with the "Primary Armament Targeting" modification installed, this is increased to 40°/s and 34°/s respectively. The gun has a magazine capacity of 4 rounds and a cycle rate of fire of 160 rounds/min. With a stock crew, it can be reloaded in 0.49 seconds; with an aced crew, this is decreased to 0.38 seconds. The reload is short enough that there is a seamless transition between magazines, although continuously firing for too long will cause the gun to overheat and jam. This happens after continuously firing for about 1.25 min, or about 200 rounds. There is no noticeable drop in accuracy as the gun overheats.

The Dark Aggressor can carry four 533 mm Mk.VIII torpedoes. The torpedo tubes are located on either side of the bridge, pointing forwards with the nose angled outwards.

In RB, always set the depth stroke to the minimum 1 m setting. This is because many vessels that the Dark Aggressor can face will not have a deep enough draught to fuse the torpedo at a depth stroke setting of 4 m. In AB, depth stroke is automatically set to the most optimal setting. 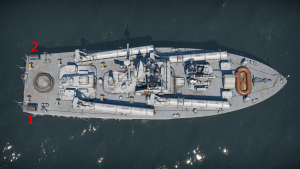 The Mk.VII depth charges are carried on the stern, one on each side. They are dropped one at a time in the following order:

There is almost no practical reason to use depth charges on any naval vessel in the game. Although they usually result in a one-hit kill if used properly, they are extremely situational, requiring the player to close to point-blank ranges to even use them. In almost every case, anytime a depth charge could be used, the guns or torpedoes can be used instead to greater effect. In fact, depth charges tend to actually be a liability in battle, since they essentially act as exposed ammo racks before they're dropped. Like torpedoes, they can be shot at, and if destroyed, they have a chance to detonate, instantly destroying the boat.

Compared to the sister gunboat Dark Adventurer, the Dark Aggressor is a traditional PT boats and plays like one, with some slight caveat. The boat features four powerful torpedoes and frontal-mounted Bofors autocannons in exchange of the 114 mm cannons. Due to the lack of rear coverage, however, the boat is highly vulnerable against flankers or enemy aircraft approaching the stern. Because of this, let your bow face the enemy as much as possible to minimize the chance of ammo rack detonation.

As the Bofors have a higher effective range than most of the ~20 mm autocannons that were quite common at this BR, the Dark Aggressor can also be used to provide fire support at longer ranges (~2.5 km) and outrange most of the PT boats. As the Bofors can seamlessly switch between each ammo belt, the AP belt is recommended for long range engagements, though the "Universal" belt can also do its job quite well at range.