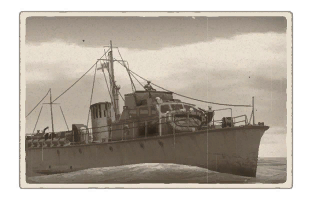 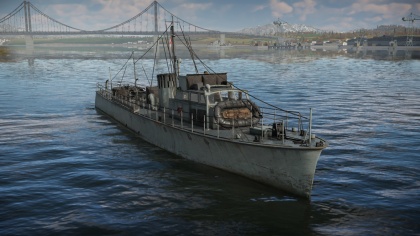 The Fairmile A (ML100) is a rank I British motor gun boat with a battle rating of 1.7 (AB/RB/SB). It was introduced in Update 1.83 "Masters of the Sea" as part of the British fleet closed beta test.

Fairmile A (ML100) has the following armour layout:

Fairmile A (ML100) internals (starboard side). The aft ammunition storage is obscured by the fuel tanks here.

Any gun in the game will easily be able to penetrate anywhere on the boat at practically any range.

Fairmile A (ML100) can be hull-broken by any gun with a diameter greater than 4 inches (102 mm). Generally, hull-break triggers when a capable gun hits and destroys any hull compartment with HE, resulting in the instant destruction of the rest of the boat. At Fairmile A (ML100)'s battle rating, the only gun capable of hull-breaking her is the 8cwt QF Mk I, found on Dark class (FPB 1101). The ability to be hull-broken by guns larger than 4 inches is a trait that applies to the vast majority of boats in tier 1 and 2, so in that respect, Fairmile A (ML100) isn't better or worse than most other boats.

For her primary armament, Fairmile A (ML100) has one 47 mm 3 pdr QF Hotchkiss cannon in a single mount, mounted centerline aft. It has 300 rounds of ammunition available for it. The mount can traverse horizontally at a rate of 40°/s and vertically at a rate of 25°/s. The gun is single-shot and has a nominal rate of fire of 30 rounds/min. With a stock crew, it can be reloaded in 2.6 seconds; with an aced crew, they can be reloaded in 2 seconds.

There is only one choice of ammunition available:

For her secondary armament, Fairmile A (ML100) has six 7.72 mm Lewis 1916 machineguns in three twin mounts, one in front of the bridge and one on either side amidships. For each mount, there are 3,880 rounds of ammunition available, 1,940 rounds per gun, for a total of 11,640 rounds. They can traverse horizontally at a rate of 75°/s and vertically at a rate of 75°/s. Each gun has a magazine capacity of 97 rounds and has a rate of fire of 550 rounds/min. With a stock crew, the guns can be reloaded in 14 seconds; with an aced crew, they can be reloaded in 7 seconds. Their maximum range against surface targets is roughly 1.6 km. Mk.VII depth charges numbered 1-12 according to their drop order (click to expand).

Fairmile A (ML100) can carry 12 Mk.VII depth charges mounted amidships, 6 on each side facing outwards. The depth charges are dropped one at a time in this order (see the image):

Foremost to aftmost, alternating port and starboard starting on the port side:

Fairmile A (ML100)'s secondary armament consists of the familiar 7.72 mm Lewis 1916 machinegun found on earlier boats in the British naval tech tree, and Fairmile A (ML100)'s guns suffer from the same drawbacks — low damage output, long reloads, and a small maximum range — making them very poor against both boats and aircraft. The low damage output is an even worse issue on Fairmile A (ML100), since a maximum of only four — often only two depending on the angle — out of the six guns can be brought to bear at once. This is essentially only half or worse of the firepower of MTB-1 1 series whose armament wasn't the best to begin with.

Fortunately, Fairmile A (ML100) has a weapon earlier boats don't: the primary armament, a 47 mm 3 pdr QF Hotchkiss cannon. Unfortunately, the cannon isn't much better than the machineguns and suffers from its own set of problems. The 47 mm cannon is a single-shot weapon, and, while its reload is on par with similar calibre single-shot cannons, just like those other cannons, its damage output is abysmal and easily outclassed by any autocannon. The maximum range is also rather bad due to the cannon's low muzzle velocity and projectile mass. The accuracy isn't fantastic, and because of the reload in between each shot, correcting aim on targets further than 2 km, or even 1.5 km in many cases, can be quite the challenge. Like the machineguns, the cannon is also a poor anti-aircraft weapon due to its single-shot nature and lack of any airburst ammunition.

Fairmile A (ML100) has below-average survivability for her size with a complement of only 14. Her lack of any really effective armament, though, is really the deciding factor of her survivability. A way to extend survivability is to simply take out enemies before they have a chance to deal back any significant damage. Because of her underwhelming armament, Fairmile A (ML100) will always be unable to take out enemies as quickly as her contemporaries, increasing the damage she takes in the meantime. This makes Fairmile A (ML100)'s survivability very bad. To compensate for this, Fairmile A (ML100) is best played behind cover with the aft cannon facing the enemy, leveraging the element of surprise to deal as much damage as possible to any enemy that might come around the corner. Perhaps unintuitively, the machineguns can penetrate much more armour than the cannon, so be prepared to switch to the machineguns (default: Alt + 2) to deal with any armoured targets. Of course, because of the long reload and small magazine capacity, always fire off any remaining ammunition after engagements when using the machineguns to guarantee full magazines for the next engagement.

For the 7.72 mm Lewis machinegun 1916, the best ammunition choice is the 7.7 mm AP belt since it has the highest ratio of AP to T rounds. While the 7.7 mm API belt may look tempting because of the incendiary tracer rounds, the IT rounds are actually stopped by most wooden hulls more often than not and rarely start fires, if ever. This belt is technically the best to use against aircraft, though with such a long reload to switch to it and with such a minuscule difference in damage anyway, there isn't much of a point in using it for that role either.

Being anti-submarine weapons and with the present lack of submarines in the game, there is practically no reason to use them. While they can be used against surface targets to some success by dropping them right next to a slower target, this is extremely situational. If attempting this, remember the order in which the depth charges drop and that there is no reason to use any depth charge activation time setting above the minimum 3 seconds, since higher delay times means the depth charge will sink further, and thus away, from the target. Again, it should be reiterated that this is very situational.

There is no practical reason to use depth charges battle, especially since, if they're not dropped, they essentially become unarmoured ammo racks.

In early 1939, Noel Macklin, a British industrialist, became aware of the Royal Navy's lack of anti-submarine boats through an article by Vice-Admiral Cecil Vivian Usborne. Macklin formulated a scheme in which prefabricated parts, built as near to completion as possible, would be sent in kit form ready for final assembly and fitting to the many minor boatbuilding companies throughout the country. This would allow parts and materials to be sourced from companies with no boatbuilding experience and assembled by unskilled labour at unutilized boatyards. Under this decentralized system, the boats could be manufactured quicker and cheaper than had they been manufactured at a single yard, all the while without straining major boatbuilding companies, such as Vospers, British Power Boat Co., White, or Thorycroft, which were needed to produce specialized, high-speed MTBs and MGBs. Macklin met with Vice-Admiral Usborne in May 1939, and immediately, they began assembling a team of naval engineers and designers and shortly thereafter formed the Fairmile Marine Company. Fairmile quickly produced a wooden motor launch design and proposed the idea to the Admiralty. Ultimately, the Admiralty declined to make an order. Nevertheless, convinced in the idea, Macklin and Fairmile proceeded to produce a prototype as a private venture.

The prototype was ordered from Woodnutt & Co. at St Helens, Isle of Wight, on 27th July 1939 and was laid down on 29th October 1939. It had a hard chine hull and had a length overall of 110 feet, a beam of 17 feet 5 inches, a draught of 4 feet 6 inches, and a displacement of around 57 tons. It was powered by three Hall-Scott Defender petrol engines, 600 bhp each, driving three shafts, allowing it to achieve a top speed of 25 knots. With the threat of war approaching ever closer, the Admiralty had no choice but to acknowledge the serious need for anti-submarine boats and reconsidered Macklin's proposal. While it was still under construction, the Admiralty ordered the prototype in the summer of 1939. This order was followed by another on 22nd September 1939 for an additional 24 boats, though this was later revised to 11 Fairmile designs — the Fairmile A type — and 13 boats of a new Admiralty design — the Fairmile B type. The twelve Fairmile A motor launches were built by ten different companies and were all be completed between May and June 1940, all twelve entering service shortly after completion as MLs 100-111.

Interestingly, the Fairmile A motor launches were ordered by the Admiralty without a specified armament. As such, the decks of the boats were not built to take heavy mounting equipment. As a stopgap measure, it was eventually decided that the armament would consist of a single aft QF 3-pdr Hotchkiss cannon and several twin Lewis gun pintle mounts, with one on the bow and a pair of mounts amidships. For hunting U-boats, the boats were given ASDIC equipment and depth charge racks, one on each side, capable of carrying up to 6 depth charges each. Early into service, the boats also received a Holman projector which was mounted amidships. For their first several months of service, the Fairmile A's hunted U-boats and protected convoys in British coastal waters.

Throughout their service, The Fairmile A's were plagued by their handling issues and short operating range. By 1941, with the superior Fairmile B motor launches already in service, any surviving Fairmile A's were converted into minelayers, their depth charge racks replaced with mine racks capable of carrying either 6 bottom mines or 9 moored mines. The 3-pdr Hotchkiss was relocated to the bow, and in its place, a twin 0.5 calibre Vickers machinegun Mark IV mount was added. As minelayers, their funnels were also removed, exhaust rerouted out the sides instead. In 1943, the Fairmile A's received an upgrade in the form of a single 20 mm Oerlikon cannon in place of the removed funnel and an aft twin 20 mm Oerlikon Mark IX mount. By 1945, the surviving Fairmile A's were converted once again, this time into anti-submarine escorts. As part of this conversion, they received depth charge racks, a Y-gun depth charge thrower, Type 291 radar, and two 2-inch rocket flare launchers. After the end of the war, the surviving Fairmile A's were put into reserve and were all eventually sold in 1947 and 1948.

The prototype, ML-100 was the first of the Fairmile A's to be built. She was ordered from Woodnutt & Co. at St Helens on 27th July 1939, laid down on 29th October 1939, and completed on 19th May 1940. From 1940 to 1941, ML-100 was based at HMS Midge at Great Yarmouth and performed anti-submarine escort duties around Grisby. In either late 1941 or early 1942, ML-100 was converted for minelaying operations and was transferred to the 51st ML Flotilla based at HMS Beehive at Felixstowe. She was commanded by the following: