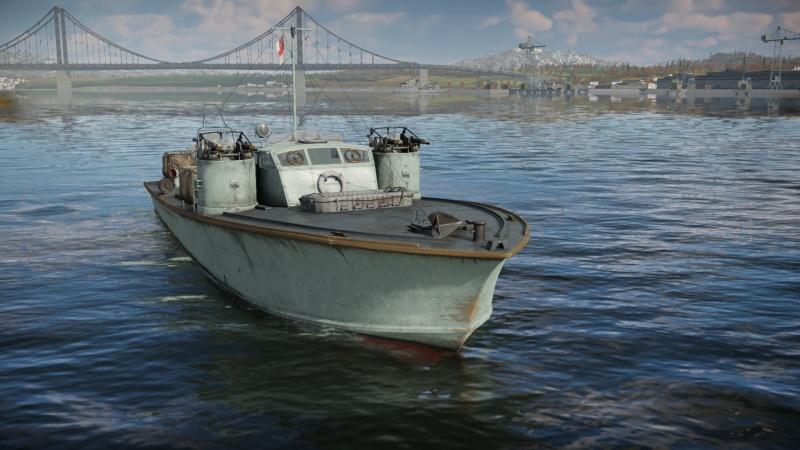 The 70 ft MGB-61 is a rank I British motor gun boat with a battle rating of 1.7 (AB/RB/SB). It was introduced in Update 1.83 "Masters of the Sea" as part of the British fleet closed beta test. With the split of the naval tech trees in Update "New Power", MGB-61 was moved to the coastal fleet tech tree. 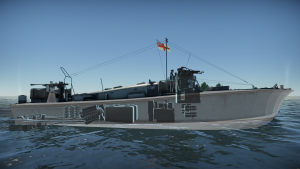 Like most coastal vessels, MGB-61 has no practical armour. The gunshields are largely superficial; while they may stop low-calibre machine guns, heavy machine guns and cannons will easily penetrate them at any range. The hull and superstructure are unarmoured and will not stop any sort of gunfire.

The hull is split into three compartments. Starting from the bow and working towards the stern, the first compartment starts at the bow and ends in front of the bridge; the second ends between the fuel tanks and the engines; the third ends at the stern.

MGB-61 can be hull-broken by any round with a large enough diameter and explosive mass. In general, this is limited to HE rounds greater with a diameter greater than or equal to 4 inches (102 mm) with an explosive mass greater than 1.5 kg. At MGB-61's own battle rating, there is only one gun capable of hull-breaking her:

MGB-61 has a crew complement of 12. With a stock crew, it is knocked out when 7 crew are lost; with an aced crew, this is increased to 8. Overall, the survivability is average.

When moving forwards at high speeds, the bow will lift out of the water. This creates a blind spot at close ranges in front of the boat where, depending on the angle, one or both of the twin 12.7 mm Vickers Mk.V mounts are unable to depress far enough to get the guns on target.

The primary armament consists of four 12.7 mm Vickers Mk.V machine guns in two twin mounts, one on either side of the bridge. There are 4,000 rounds of ammunition available for each mount, 2,000 rounds per gun, for a total of 8,000 rounds. Stock, the mounts can traverse horizontally and vertically at a rate of 64°/s; with the "Primary Armament Targeting" modification installed, this is increased to 75°/s. Each gun has a belt capacity of 200 rounds and a cyclic rate of fire of around 600 rounds/min, though the outboard guns on both mounts fire slightly faster, around 685 rounds/min. With a stock crew, the guns can be reloaded in 13 seconds; with an aced crew, they can be reloaded in 10 seconds.

Of the belts, the I belt has a noticeably higher damage output than both the Universal and API belts, both of which are about the same in terms of damage. This is because it has the highest concentration of incendiary rounds, which are the only ones with any high-explosive filler. However, because it lacks any armour-piercing rounds, the I belt has slightly less armour penetration than the other two belts. In general, though, any armour that can stop the incendiary round will also be able to stop the armour-piercing round. For the most effectiveness, take only the I belt once unlocked, and switch the primary 20 mm/70 Oerlikon Mk.II cannon to deal with armoured targets.

The secondary armament consists of a single 40 mm 2pdr Rolls Royce cannon mounted aft, with a maximum of 1,200 rounds of ammunition. Stock, the mount can traverse horizontally at a rate of 38°/s and vertically at a rate of 47°/s; with the "Auxiliary Armament Targeting" modification installed, this is increased to 45°/s and 55°/s respectively. The gun has a magazine capacity of 4 rounds and a cyclic rate of fire of 231 rounds/min. With a stock crew, the gun can be reloaded in 2.21 seconds; with an aced crew, it can be reloaded in 1.7 seconds.

The best ammunition for general use is the HE belt, due to it having the highest ratio of HE rounds to AP rounds, making it the most effective against both aircraft and the vast majority of surface targets. Because of this, the HE belt should be the main ammunition once it is unlocked. Additionally, take a substantial amount of the belt as well for use against armoured targets. Alternatively, take only Universal if you want to avoid the reload delay between switching ammunition types, though this comes at the cost of lesser damage efficiency. 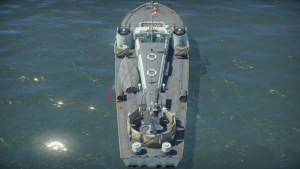 There is almost no practical reason to use depth charges on any naval vessel in the game. Although they usually result in a one-hit kill if used properly, they are extremely situational, requiring the player to close to point-blank ranges to even use them. In almost every case, anytime a depth charge could be used, the guns or torpedoes can be used instead to greater effect. In fact, depth charges tend to actually be a liability in battle, since they essentially act as exposed ammo racks before they're dropped. They can be shot at, and if destroyed, they have a chance to detonate, instantly destroying the boat.

As a motor gun boat, MGB-61's primary armament is actually quite good, unlike the previous vessels in its tech tree line. With four 12.7 mm Vickers Mk.V machine guns, the damage output is roughly comparable to two or three 20 mm cannons, and with a belt capacity of 200 rounds each, they can sustain fire for much longer than most contemporary autocannons. While most of her cannon-armed counterparts must reload after one or two kills, MGB-61 can easily take out multiple enemies in quick succession, making her well suited for aggressive playstyles. However, this firepower comes at the cost of a long reload, anywhere between 13 and 10 seconds depending on the level of the crew.

In addition to a long reload, the primary armament's firing arcs are also somewhat restrictive. Both gun mounts are unable to fire in a ~117° arc in the direction of the other mount, and at rest, both are unable to fire at anything within ~275 m directly behind the boat. When on the move, the bow will lift out the water, eliminating the rear blind spot, but also creating a new one in front of the boat that extends for several hundred metres where one or both of the mounts are unable to depress far enough to get guns on target.

With all of this in mind, play MGB-61 aggressively, but always be aware of the limits of the guns. Because of the long reload, be proactive with the reloads. Keep an eye on the ammunition counter and be sure to fire off any remaining ammo after engagements if there isn't much left in the belts, retreating to do so if necessary. A good time to start doing so is when there are around 250 rounds or less between all four guns. Additionally, because of the poor firing arcs, keep enemies either directly in front or directly behind you at all times so that all of the guns are able to fire, and be ready to speed up or slow down to eliminate the fore or aft blindspots as needed. MGB-61's survivability is rather average and is largely reliant on being able to destroy opponents before they can deal much damage in return, so not being able to fire for even just for a few seconds due to any reason will often result in your own destruction, especially while playing aggressively.

Lastly, if you come across any armoured targets that the 12.7 mm machine guns fail to penetrate — in particular, the Pr.1124 early, Pr.1124 late, and Pr.191 — switch to the secondary 40 mm 2pdr Rolls Royce cannon. This gun is more than capable of punching through any armour MGB-61 might come across, and it also has a higher effective range, making it useful for long-range engagements. However, its damage output is noticeably lower than the four machine guns, so only switch to it when required, but always be ready to do so on a moment's notice.