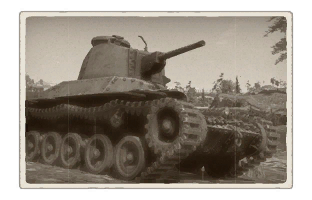 This tank has little to no armour, so is usually destroyed in a single shot. However, at long ranges the tank will be able to survive multiple shots because the enemy shell penetration drops off to be insufficient against even the Chi-Ha Kai's thin armour.

This tank is sluggish for its battle rating and has a really bad traverse and reverse speed. It is just plain slow.

The Chi-Ha Kai is armed with the 47 mm Type 1 cannon. At the battle rating, the gun is not bad, it has good post penetration effects but seriously lacks penetration that some other tanks have.

The Chi-Ha Kai has a machine gun mounted to the turret which can not penetrate most tanks at its battle rating, but a few open topped vehicles will be a great target for machine gun fire.