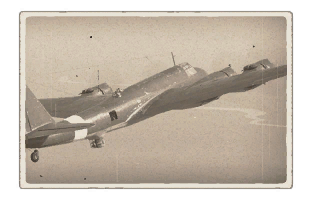 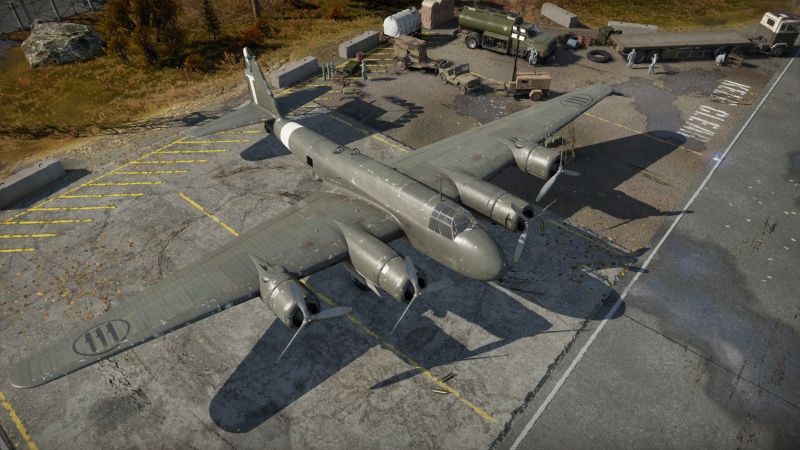 The P.108A serie 2 is your normal P.108, but with a 102 mm anti-shipping gun containing 50 rounds. In saying that, you're basically an over-sized Hs 129 or PBJ-1H. The main reason for not seeing the aircraft in Air AB, RB or even Sim is due to the fact that the plane is situational and requires a few different factors to line up for it to be successful, including air superiority, lack of enemy AA, and open space for it to manoeuvre. The defensive weaponry is decent for its battle rating but will not help the plane survive if it get uptiered past 4.0.

It is difficult to compliment the P.108A's flight performance. It is for all intents and purposes a heavy bomber repurposed into a strike aircraft. It flies somewhat acceptably compared to other bombers but by strike aircraft standards it is poor. The P.108A is slow, turns poorly, and does not accelerate or climb well. Roll rate and energy retention are not really applicable for this aircraft. The sheer weight and bulk of the plane give it a large amount of inertia, so getting guns on target during a strafing run can be a major challenge due to its weak rudder and extremely sluggish controls. Once its altitude is expended, there is little chance of getting it back in a timely manner. Think twice about your speed and altitude before attacking a ground or naval target and avoid steep dives or you will be fighting with the controls in a futile attempt to pull up!

The Piaggio P.108A Serie 2 is a four-engine strike aircraft. Despite being a strike aircraft, the 102 mm cannon is relatively inaccurate which means the targets that best suit this plane are large stationary targets that the cannon can penetrate and destroy. The plane's defensive firepower is relatively poor, so you should try to avoid enemy planes as much as possible. If an enemy plane is lining up to attack you from the front, try to swing your plane around and give him your tail so your gunners can shoot back at him. It is recommended to fly with squadmates or recruit an escort as a lone P.108A is easy prey for roving enemy fighters. Stay low and do not go above 1,900 m. Speed is key: try to maintain a speed of close to 200 km/h to give you wiggle room as your stall speed is 155 km/h despite the massive weight.

Bomber vs bomber gunfights are ill-advised because the P.108A's gunners are easy to knock out and their weapons do not deal a high amount of damage. Try to make the enemy bomber attack you from behind, or try to stay in front of and below him. It is possible to go low-level bomber hunting using the main cannon and its HE shell, but this is very situational and will most likely end up in you being hunted by enemy fighters. Enemy AI attackers can be hunted as they fly very predictably, but will often have potent defensive guns which can snipe your pilot as you pull up behind them. If you do manage to get a hit with the HE shell, 690 grams of TNT will blow even the largest aircraft out of the sky.

In Ground RB, try to attack enemy vehicles from the side, preferably ones that are stationary and looking away from you. This is where they are the largest and there is less chance that your target will spot you before you can attack. Since the reloading of the 102 mm cannon is done manually, it will take a relatively long time to reload. A large ammo reserve means that you can take a couple of long-distance sniper shots as you get closer to your target. Make sure you can both hit the target and pull out of the dive or you will miss and crash. The large calibre gun, which was derived from the 90 mm 90/53 mod.41, will do significant damage to enemy tanks if it gets a hit. Try to aim for the crew compartment to maximise damage, or hit the engine to immobilise it for so you can swing around for another pass.

The aircraft is a very large target, its size and slow speed mean that enemy tanks have a chance to shoot you down with their coaxial machine guns and even their main cannon. The poor frontal armour will often get the pilot sniped or have its engines and fuel set alight on a low pass. Beware of enemy tanks that have roof-mounted machine guns. Many American vehicles like the M24 Chaffee, M4 Sherman, and the M10 GMC have .50 cal machine guns for AA defense. These will do a lot of damage to your plane and pilot. Try to keep your distance from these tanks and attack when they aren't looking.

Any enemy SPAA able to get its guns on target is dangerous. If there is an enemy SPAA present, circle outside of the battlefield and try to get your teammates to dispatch it before you start attack runs.

Despite anti-shipping being the P.108A's original design purpose, Naval battles are a poor game mode for the aircraft. Almost every target in Naval will have some sort of AI-controlled AA gunners that can hit you with pinpoint accuracy. It is recommended to go after vulnerable AI cargo ships and unsuspecting PT boats. On open waters and open skies, a P.108A is very easy to spot so player-controlled boats will most likely see you first and start evasive manoeuvres making them very difficult to hit. A lone Clemson-class destroyer like USS Litchfield can be a viable target as it has no AA armament, but will take multiple shots and multiple passes to destroy because of its large size.

The Piaggio P.108 heavy bomber series were the only strategic bombers to see service with the Italian military during World War II. The P.108 was developed prior to the war as a continuation of the earlier prototype Piaggio P.50. With long range and considerable bombload, the P.108 was supposed to offer the Regia Aeronautica the ability to attack ships and bases throughout the Mediterranean region, particularly at Gibraltar. The resulting aircraft was fairly advanced by the standards of the Italian industry, featuring all-metal construction, electric welding, and remote-control gun turrets on the outer engine nacelles. It looked somewhat like an Italian equivalent of the American B-17 Flying Fortress, which itself had been considered for license production in Italy. The P.108 first flew in late 1939.

The P.108 had its fair share of issues, largely related to its engines. During one test flight in February 1941, all four Piaggio R.XI engines of the P.108 prototype failed due to heavy icing. The pilot miraculously made a safe emergency landing. Later examples switched to the Piaggio R.XXII engine instead. The reputation of the bomber also took a hit when Bruno Mussolini, the son of Italian dictator Benito Mussolini and the commander of a P.108 crew, died after a crash on August 7, 1941 caused by hydraulic and engine failure shortly after takeoff. The P.108 only entered combat service in 1942 and saw middling success at first; engine troubles aside, Italian crews were not prepared for the navigation and fuel management challenges that long range bombing missions entailed. By 1943, the P.108s began to encounter stiff resistance from enemy aircraft and several were lost to British fighters. After the Italian armistice, the remaining P.108s saw little service. The transport versions served to the end of the war.

The P.108A was a curious modification of the P.108B bomber variant developed in late 1942. It was designed to attack ships, and to this end it was equipped with an enormous 102 mm cannon in the lower part of the nose. The cannon was a bored-out development of the 90/53 cannon used by the Italian Army, capable of firing larger shells. The installation added two tons of weight to the P.108. The airframe was revised and a special gun sight was installed, later including an analog computer. The P.108A underwent extensive testing and was deemed an effective anti-ship strike aircraft. Plans were made to assemble 5 additional P.108As for a dedicated attack unit, but the Italian armistice halted them. Thus, only one P.108A was ever built. It fell into German hands and was evaluated by the Luftwaffe at their test center in Rechlin, Germany. It was damaged and later destroyed by Allied bombing some time after 1944.

The P.108 did not make a significant impact in World War II, only being produced in small numbers and encountering many obstacles during testing and operational use. It was used in Gibraltar, North Africa, and Sicily with mixed results. The P.108A avoided the developmental troubles of the bomber versions but never entered service, and the single prototype never fired its gun in anger. In spite of its faults, the P.108 can be credited with being the pinnacle of Italian bombers. It served as a basis for the improved P.133 design, which promised superior performance and armament but was canceled after the armistice and never built.

No P.108s are known to survive today.