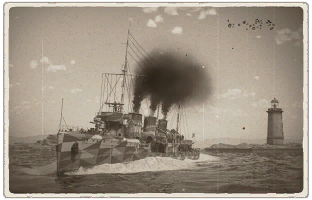 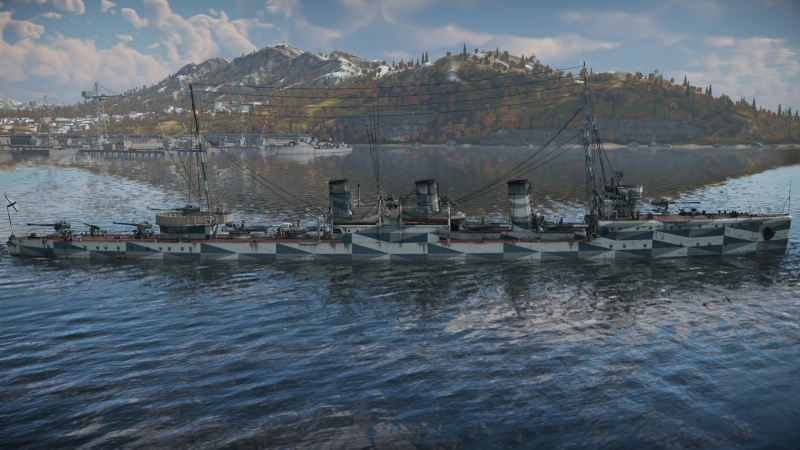 A Fidonisy-class destroyer from the imperial era, Kerch is very similar to the reserve Frunze, mainly differing in its secondary weapons, where it has a somewhat more usable secondary battery but far worse torpedoes.

As with other destroyers, Kerch is barely armoured. It mainly relies on its relatively small size and crew count to survive.

The mobility of the destroyer Kerch is not that good compared to its contemporaries, but it's quite manoeuvrable.

The biggest difference between Kerch and the Frunze is that it's using two 40 mm Pom-Pom autocannons instead of a manually loaded 76 mm and 45 mm as secondary armaments. Despite only featured two single mounts at the aft and stern, these guns are quite reliable for AA defence due to wide coverage, and it's able to fend off PT boats at close distance.

Although Kerch has three more torpedo tubes than the Frunze, it utilizes incredibly weak torpedoes with only 100 kg of explosive (less than half of Frunze's). This means it often requires more than one hit to destroy enemy ships. Other than that, its range is also awfully short at only 3 km, so it cannot attack enemy ships other than at near point blank range. Interestingly it also has two spare torpedoes, a rarity in Russian vessels.

Kerch was a Fidonisy-class destroyer laid down in 1915 for the Imperial Russian Navy. The class was the third series of the Novik-type ships. Kerch was only completed in 1917 and commissioned in the Black Sea Fleet, but took little part in the First World War, as only months later the Russian Civil War broke out. Kerch joined the Bolsheviks, and supported them in their attempt to control Crimea by bombarding White Russian forces. As the invading Germans advanced into Ukraine, Kerch retreated to Novorossiysk and was later scuttled to prevent it from being turned to the Germans after the Treaty of Brest-Litovsk. In 1929, the Soviet Navy attempted to raise the ship, but it broke apart and only the midship was salvaged, with its engines used in a power station at Tuapse.