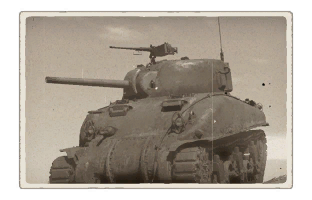 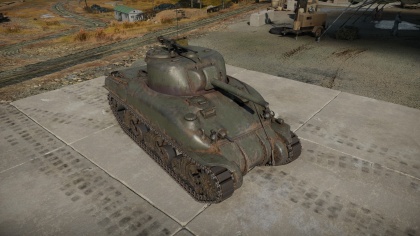 The ▄M4A1 Sherman is a Rank II French medium tank with a battle rating of 3.3 (AB/RB/SB). It was introduced in Update 1.75 "La Résistance".

The M4A1 Sherman is distinctive from its cast hull construction, causing it to have a curved hull shape. This causes the front hull armour to have a varying slope angle across the glacis, but it also presents several weaknesses. First is in the hull front and side joint with slightly flat angles when angling the tank, the next is the cast construction which diminishes the labeled effectiveness of the front armour. Though at its battle rating, its armour is still effective against certain enemy fire.

The 75 mm M3 gun is mounted in the M34 gun mount with the periscopic , a skinny gun mount compared to the future M34A1 which all future 75 mm M4 Sherman guns are mounted. This lowers the area the gun mantlet covers to contribute to turret front armour, but does present a slightly greater gun depression by -2° than the future M34A1 mounts.

At a battle rating of 3.3, the M4A1 Sherman is a very capable medium tank. The 75 mm M3 cannon is capable of destroying nearly all armoured targets at the battle rating. Combined with the very fast turret traverse rate, fast reload time of 6.5 seconds and a vertical gun stabilizer, this tank is suited to an aggressive play style due to your ability to react quickly and fire relatively accurately without coming to a full stop. The gun depression of -12° also makes this tank excel in hull down positions unlike any other tank. One must take into account this tanks very thin side armour of 38.1 mm thick, anti tank weaponry of any rank will be capable of penetrating this weak side armour so protect your flank.

Beware of this tank's very poor reverse speed as it only has one reverse gear. This affects the tank's ability to play in a defensive role. In addition, this tank is very prone to engine fire, so the FPE is a modification that must be completed ASAP. Also be sure not to let the enemy get sight of your driver and radio operators hull view ports. One single halfway decent shot, even from 20 to 30 mm guns can end you. 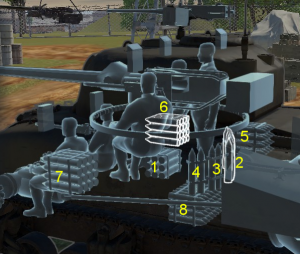 As prior stated, the M4A1 Sherman plays best in an aggressive role. Firing on the move is not a difficult task with this tank due to the vertical stabilizer. Take advantage of this tank's immense gun depression of -12°.

The tall profile of the tank is an advantage and disadvantage. In the context of a hull down position, it is an advantage due to you being able to angle the turret down over a hill or crest without having to pull further up the hill. The tall profile however does make you more visible and the tall hull makes it easy to set off an ammo rack.

During the M3's development, the designs of the 75 mm armed vehicle were being drawn up and submitted by the Ordnance Department. Specifications on the tank design were strict, with restrictions made on the tank's height, width, and weight in order to make it able to be transported over bridges, roads, railroads, and on ships. These specifications would help the army by making the tank be very flexible on strategic, logistical, and tactical grounds. On April 1941, the Armored Force Board chose the simplest of the designs, which was a redesigned M3 hull and chassis with a turret mounting the 75 mm gun designated the T6, completed in September 1941. This tank would then designated the Medium Tank M4 in American service. The tank would become the most used Allied tank during World War II as it was lended out by the thousands in the Lend-Lease program to the Allied countries. The British called the M4 the "Sherman", which coined into the tank's name M4 Sherman that it would be known as in history. The production for the Shermans began on October 1941 and would continue to be produced until the end of the war in 1945 with around 50,000 units produced, making it the second most-produced tank in World War II before the T-34 tank.

Many variants of the Shermans were produced, but they all followed a similar layout. The driver and bow gunner sat in the front driving compartment, the fighting compartment in the middle housed the turret its three crew member, and in the back was the engine compartment. The Sherman used many features present in previous American tank designs, the vertical volute suspension system (VVSS) and radial engine from the M2 Light Tanks, and the sloping armour of the M2 medium tanks. This became a contributing factor on the Sherman's reliability on the field, as most of the design flaws were ironed out with the previous tank designs. The tank mounted the 75 mm M3 gun, giving the tank very good AP and HE capabilities. The Sherman's turret traverse speed was very fast, able to traverse a full 360 degrees in only 15 seconds, which is considerably faster than the traverse speed on most German tanks. Another unique feature on the Sherman was the installation of a gyroscopic stabilizer on the gun and sight, making the Sherman one of the first produced tanks to incorporate those features. While the stabilization was only done for the vertical plane, it kept the gun stable enough to be able to shoot on the move effectively, with a study showing a 70 % hit probability on an enemy 300 to 1,200 yards away when moving at a speed of 15 mph. However, this feature was controversial among the crew and experiences with it vary.

The M4A1 Sherman model ran on a gasoline Continental R975C-1 radial engine and was one of the first models of the Sherman developed. The model in-game features the early M38 telecopic sight in the M4 periscope with no zoom, which was later replaced with a M55 telescopic sight in the gun mantlet by recommendation from the British.[1] The tank's hull was fully cast, giving the tank a distinctive rounded slope front and sides. Though the rounded shape gave the frontal armour uneven angling, it provided adequate protection up to 100 mm in thickness in certain areas. Casting the hull took less man hours to perform, but suffered from the limited capability of most American factories and was hard to repair on the field. Thus, welding was prioritized as the primary manufacturing method in the other Sherman variants.[2] Nevertheless, up to 6,281 M4A1s were produced from February 1942 to December 1943, out of the 49,234 Sherman units produced in the war.