Difference between revisions of "Frunze" 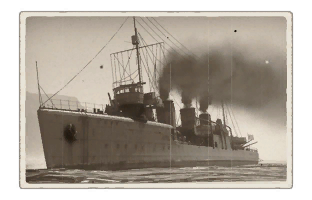 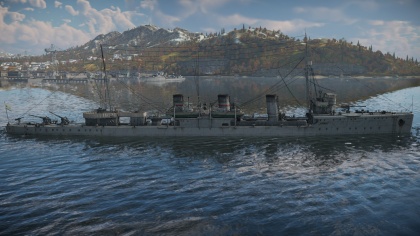 The Frunze, 1940 ("Schastlivy" type) is a rank I Soviet destroyer with a battle rating of 3.3 (AB/RB/SB). It was introduced during Update 1.79 "Project X" when the Soviet fleet was implemented into the game. Considered by many players the best learning destroyer for the upcoming line.

In addition to the 102mm cannons, the Frunze has a 76mm and a 45mm cannon. These guns fire HE shells and are essentially the only defence the ship has against aircraft, and even in doing so are sub-par. They aren’t particularly good at tackling small and manoeuvrable patrol boats either.

The Novik-class series, which includes the Frunze, comprised of the most modernized destroyers among their class in the Imperial Russian Navy. This combat ship was laid down in Kherson in 1913 and received the designation “Bystry.” Following six months of construction, the destroyer was finally launched and soon allotted to the Black Sea Fleet. In 1918, the destroyer was captured during the German occupation and later, passed into the hands of the Anglo-French interventionists. She was then taken out of commission during a retreat and was only able to join the armed forces ranks under the Soviet flag in 1927. The destroyer joined the Second World war under the designation “Frunze.” In the war’s summer of 1941, the ship was tasked with setting up minefields in the Black Sea and escorting convoys of transport ships. She also defended Odessa during its siege. On September 21st, the Frunze was attacked by the seasoned I Group pilots of the StG 77 wing during her attempt to rescue the Krasnaya Armenia gunboat bombed by Junkers aircraft. The Stukas performed numerous group raids on the destroyer, which resulted in the ship getting hit by several 250 kg bombs and consequently sinking.