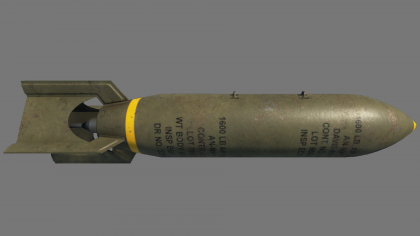 The AN-Mk 1 bomb was in United States service during World War II, seeing use sometime prior to 1944. Used between the United States Army and Navy (hence the AN designation), its purpose is to penetrate the horizontal armour of enemy naval ships and detonate below deck. To permit the bomb to penetrate, the bomb wall is comparatively thick to general-purpose bomb, and results in a smaller explosive cavity.[1] 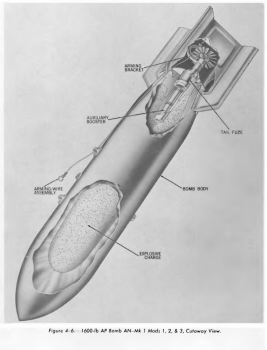 A cutaway view diagram of the AN-Mk 1 bomb.

The bomb's design is cylindrical with a pointed nose, the tail is tapered and a box-type fin assembly is utilized. The bomb diameter is 14 inches (~35.6 cm) and the length 83.5 inches (~212 cm). The total weight of the bomb is 1,590 lbs, with an internal explosive capacity of 209 lbs of explosive D.[2] The bomb used the following components: Mk 1 (or AN-M6A2) arming-wire assembly, Mk 1 arming bracket, Mk 1 Mod 0 auxiliary booster, and the AN-Mk 228 tail fuse with a 0.08 second delay. The bomb comes painted in olive drab, with identifying nomenclature and other data painted on the bomb body [3][4]

Three modifications of the AN-Mk 1 regarding the method of attachment of suspension accessories are noted under the following designations:[1]

Although different Mod numbers are identified for the AN-Mk 1 (Mod 1, 2, 3), there are no physical or component differences in the bomb design as the Mods only identify the manufacturers.[3]