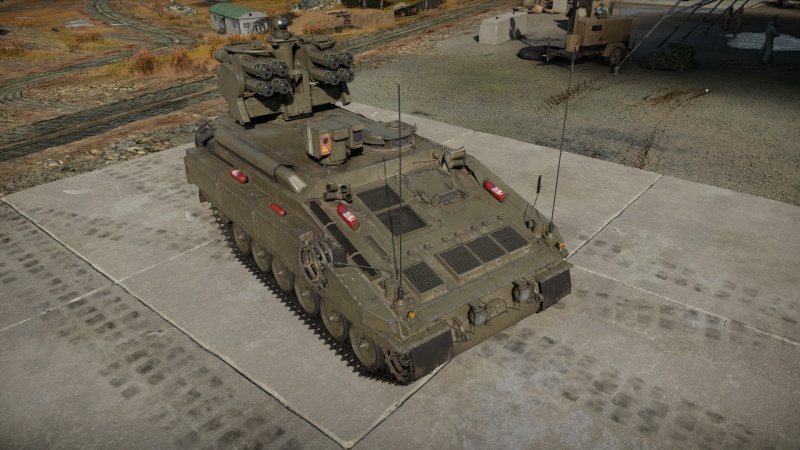 The FV4333 Stormer HVM is a rank VII British self-propelled anti-aircraft vehicle with a battle rating of 10.3 (AB/RB/SB). It was introduced in Update 1.89 "Imperial Navy".

This tank uses the chassis of Scorpion, which you might be familiar with since Striker. As before, it can only take punishment from the front and it's best to avoid anything more serious than autocannon armed light tanks or KPz-70, since most 9.0+ tanks have at least 100 mm gun along with their coaxial weapons.

The missiles do not have any protection this time around and user should avoid being bombed and shot by artillery at any cost. Even a 7.62 mm machine gun can ignite missiles on a good hit. Even close artillery or HE miss might set off Starstreaks and cause the entire rack to explode, annihilating the carrier and probably taking it's allies nearby with it in process. Even if missiles did not explode, it is very likely that the hull will take enough overpressure damage to take out the crew.

The missile carrier has very short burnout time, so even if it survived a strafe run from a gunship while just being set on fire, it will burn fast and explode in about 8 seconds.

As such, Stormer should avoid fighting anything directly, if possible. To ensure not a single aircraft knows about its presence, an IRST system is used instead of radar - not even best helicopters around can detect it. In arcade mode, they can still see the Stormer, but the optronic system will allow the tank to destroy them before they have even a chance to aim at it.

As with Striker, the Stormer HVM is capable of driving both forward and backwards relatively fast even with no upgrades. The ability to drive forward and turn around at same time still relies on driver being maxed out, so your crew must be very high level.

Do not race against Japanese Type 90 and Italian scout tank Centauro ROMOR, they are much faster.

The Stormer HVM uses surface-to-air Starstreak missiles and their unique properties make it hard to use them for anything else. There are 8 of them mounted on the turret and there are 8 more spares in the back of the tank.

In spite of the indicated top speed, Starstreaks bleed their speed very fast when forced to chase jets at an angle, so consider practising fire discipline or look for spots from which you can hit them head-on or in the back.

The missiles are guided by a laser, which makes them trigger LWS upon launch, but also allows to guide multiple launches at once and renders jammers and most countermeasures useless. 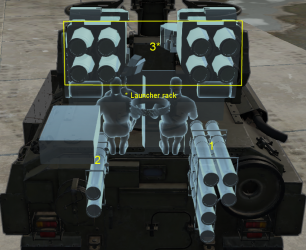 Ammo racks of the Stormer HVM

Stormer HMV uses special infrared search devices to detect targets. While they have a significantly shorter range than "normal" radar and cannot tell the range towards target until specifically locked onto it, they can tell which targets are friendly and do not target them, or at least specifically mark them as "friendly". They also scan Stormer HVM surroundings approximately 6 times a second even when locked on, which makes bypassing it next to impossible.

Infrared detectors are invisible to "radar detectors" and will not alert helicopters or supersonic jets of your presence. There is no benefit in powering it down as of now.

Trees and smokes can completely block IRST system - if you cannot see your opponent yourself through thick forest, neither will the system.

The search system will react to flares launched during night battles and flares launched by helicopters. It is possible to lock onto them by accident as well, but once the enemy aircraft was locked onto, the tracker will ignore everything else.

Avoid participating in direct combat with medium tanks at any cost, as you definitely will not help in winning the fight directly and they might use the gigantic ammo rack as a way to destroy your allies. The only logical exception is if you are supporting allied ATGM tank by removing hostile tank ERA and turning their attention towards you, then immediately retreat. Any attempts to do sneaky shots on medium tanks should only be done if you are sure it's worth it.

In case if you managed to spot hostile SAM, you can try to remove them by igniting their missiles to help your team achieve air superiority. Remember, you cannot fire on move, so if they will also notice you and have actual guns, the tables will turn immediately. At long range you can fire at least three times before missiles of most other SAM tanks would reach you.

In case if you have nothing better to do at the moment or spotted an enemy tank, you can scout it from a remote location. Do not try to scout if enemy team is actively searching for you.

The carrier missile drags the actual missiles away from Stormer at a speed of about 800 m/s and unleashes them at about ~450 m range. Until that point, the missile can be used as a weak form of HE ATGM and if it hits enemy light tank or SPG weak spot it can do fatal overpressure damage.

Carrier missile does shrapnel-like damage and it will deteriorate after hitting any obstacles, so it is necessary for an explosion to hit the target weak spot directly, almost like with HESH. The explosion range also seems to be halved compared to HE. Anything, including simplest forms of side skirts, will block SAM from destroying an enemy tank. Most of BR 9-10 tanks have not just side skirts but either ERA or NERA screens all over them and will not take any damage from single missile and hitting those randomly is going to only damage machine guns and the screens.

At short ranges other SPAA, SPG and light tanks are fair game and it is preferable to try and destroy them via overpressure damage if they try to attack Stormer HVM, as simply running away from them is rather difficult.

Three missiles disassemble from carrier missile and start increasing their speed to the extreme, easily reaching 1178 m/s. To not lose control over their movement due to speed, they constantly spiral. Missiles have acceptable agility and will instantly react to any scope movements, so aim them using sniper mode. Be quick and precise, if possible.

They have minimal penetration and, mostly due to their spiralling nature, aiming them at ground forces is practically pointless, unless you try to disintegrate tanks which have little to no armour, like other SPAA or ATGM tanks - in the case of such tanks, if you somehow hit their weak spot, they still can be destroyed by smaller missiles, so it is worth trying.

Medium tanks will shrug off Starstreaks and usually it does little more than just annoy them. 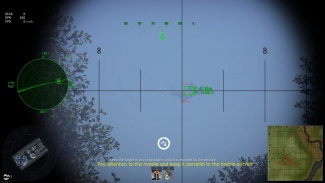 To helicopters, the missiles usually are fatal, as they are almost bound to get hit by at least one of Starstreaks, and explosion either tears off the tail or knocks out the pilot. However, even in the case of this missile, there are cases when Support helicopters somehow survived a direct hit, so you might want to launch two attacks at once just to be sure.

To use the missiles against moving aircraft (mainly, planes) properly, you need to lock on to an aerial target. The IRST system cannot tell you where the targets really are, just the direction they're in. Instead of wasting time while looking for them manually, simply lock onto any target on your "radar" display via hotkeys like with Chieftain Marksman and turret will near instantaneously turn towards them by itself. 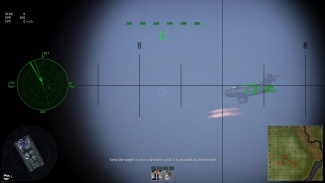 As could be seen on the screenshots, in full IRST mode sniper crosshair tries to imitate the drag of missile as it tracks the aircraft, and by keeping sniper crosshairs on plane or helicopter you can guide your missiles towards an aircraft. Keeping an actual missile on target is more important, however, as system accuracy is generally far from stellar and it shouldn't be trusted too much.

It is also very difficult for the darts to catch up to jets not flying straight away from or towards the Stormer HVM at speeds above 600 km/h, as the missiles bleed their speed very fast. It's better to attack when jet is further than 3 km away, slows down or flies in a straight line, so that you can attempt to adjust the shot yourself.

The Stormer HVM has huge gaps in optics: 10-40X optics, which can be manually adjusted during AA duty, simply hitting "maximum zoom" will probably result in a miss at some angles of attack.

In the mid-1980's it became clear that supersonic aircraft and strike helicopters proved to be dangerous against ground troops. To counter these threats back in 1986, the British Ministry of Defence began development of the "Starstreak HVM" (High-Velocity Missile) anti-aircraft missile system. The production was done by the Shorts Missile Systems company. On the 1st of September in 1997, the famous Starstreak anti-aircraft missile system had been put into service by the British Army. Initially, it was developed in 3 different variants: portable, stationary and mobile, although later they additionally developed an air version but it didn't find a practical application.