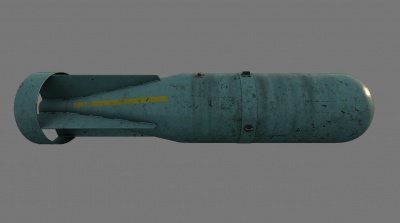 Due to its overwhelming explosive power, the SC2500 is able to destroy multiple tanks that are in close proximity. It is best used on ground targets that are close together or that stand on a capture point as it has enough range to clean the entire point. Be careful not to bomb your own forces since the blast radius is large.

The SC2500 lacks versatility in realistic air battles since you can bomb only one base at a time with it. It also slows down the plane a lot. The He 111 H-16 has better options (2x SC1000 bombs) for that role. Since maps usually feature 3 bases at that BR, you won't be able to destroy them all because you won't have the time to return to base several times without getting shot down or the match ending. It is advised not to use the SC2500 bomb.