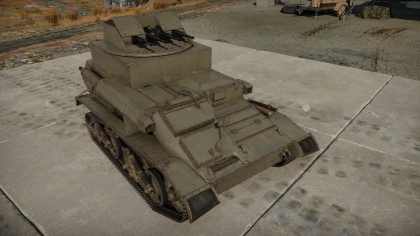 This tank makes for a good entry-level anti-aircraft vehicle; Good speed, manoeuvrability and a devastating short to medium range AA attack. This vehicle should be used in the rear end of an assault, watching the skies for incoming bogies. However, the real ace is that the guns lack accuracy but the trade-off for a sheer volume of fire, filling the skies with a hailstorm of bullets that can discourage bandits from lining up on an attack run. However, anything beyond effective range won't be struck down effectively. 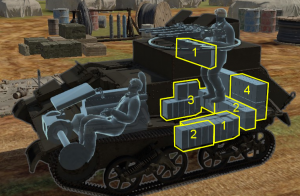 The key to playing this vehicle effectively is by being patient. Wait until your target is nice and close and then let loose. The four machine guns will shred enemy bogies if you aim well so try and nail him before he has a chance to dart out of range.

Avoid engaging enemy aircraft at long range as the drop-off goes away out of effective range; Not only will you give away your position, the enemy will be very likely to hunt you down and it won't fare well against a direct confrontation with ground units.