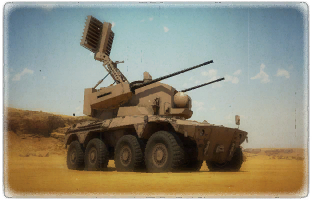 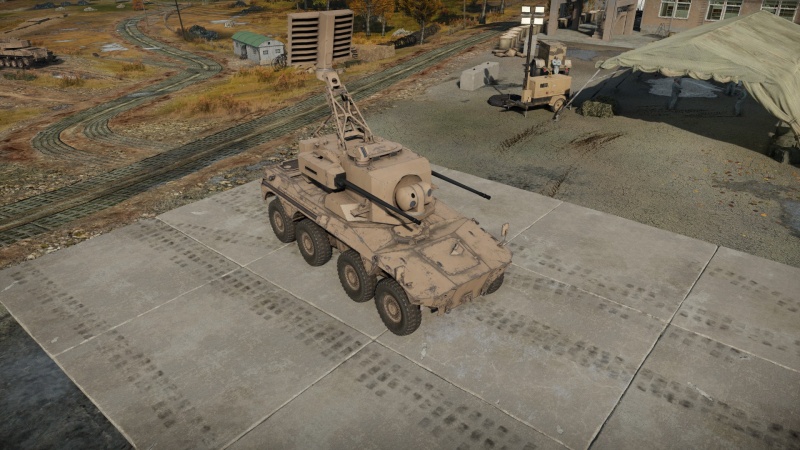 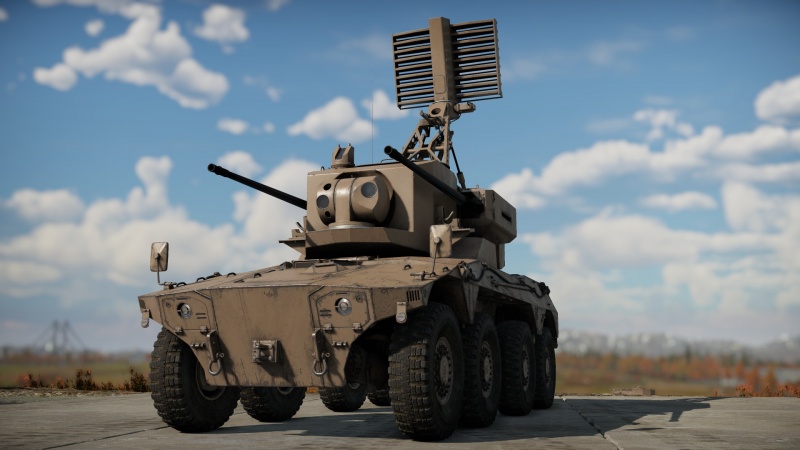 The Rooikat ZA-35 is a rank VI British SPAA with a battle rating of 8.3 (AB/RB/SB). It was introduced in Update "Ixwa Strike". Role-wise it is a successor to the Falcon.

The ZA-35 is based on the Rooikat armoured car chassis, and as such retains the low protection of the family. The most heavily armoured part of the vehicle is the central band in front of the driver. A 25 mm plate sloped at 77° will soak up lower power autocannon fire easily, but the same cannot be said for the 30 mm flat plate that protects the transmission and the driver's feet. Despite the light armour, the hull can survive .50 cal machine guns from many angles and even prevent overpressure damage from being taken at certain spots.

The same cannot be said about the turret. The ZA-35's turret armour is comprised of 10 mm rolled homogeneous armour plating on all sides, so it is vulnerable to heavy machine guns. Two of the three crew members sit inside the turret, so one good high explosive hit will probably knock the vehicle out. The vehicle is very weak to attack from aircraft, so striking first is of paramount importance.

Like the other members of the Rooikat family, one of the ZA-35's greatest strengths is its mobility. With the same chassis, engine, and overall weight as the Rooikat Mk.1D, drivers can expect near identical performance. Its strengths are incredibly high average and top speed. Some weaknesses include a large turn radius and poor torque on inclines.

The GA-35 (35 mm) autocannon is functionally identical to the Oerlikon KDA (35 mm) found on the Chieftain Marksman, Gepard, and Type 87. However, the GA-35 is unable to utilize the 35 mm APDS belts found on the vehicles mentioned. Despite this, at close range, the GA-35 can penetrate the sides of a majority of medium tanks found at the ZA-35's battle rating, including even the lower sides of Soviet medium tanks. Unfortunately, the gun depression is quite poor, so ideally Soviet tanks should not be approached at point blank ranges and instead circled around at about 50m range. Many of American brawler tanks are immune to AP belt from the sides and will only be vulnerable in a turret ring or engine roof (and even that is not guaranteed).

The high rate of fire of the cannons can burn through the 460 rounds of ammunition in under half a minute of sustained fire, so firing in short bursts is generally ideal, as the restocking time at friendly captured points can be risky. 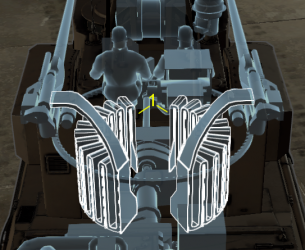 Unlike the Chieftain Marksman, the ZA-35 has an independent tracking unit and detection unit, which allows the vehicle to detect new targets even while locked on to another target or to disable radar for safety reasons and still maintain the lock. The ZA-35 utilizes an enormous EDR 110 tracking radar fitted on a mast which can extend up to 5 m into the air. The mast is foldable and the radar array will fold behind the turret. Instead of a tracking radar, the ZA-35 uses an electro-optical target tracking system, which uses visual line of sight from the gunner's sight in the front to track airborne targets. The tracking system does not enjoy the same height advantage as the detection radar, and the optical system will lose target tracking if any kind of visual obstruction (including the ZA-35's own ESS) is in the way for any significant length of time. However, the system will not trigger radar warning receivers since it uses passive tracking, nor will chaff defeat the lock-on.

The ZA-35's greatest strengths over its predecessor, the Chieftain Marksman, are its vastly increased mobility and improved radar. The mobility of the vehicle allows players to control exactly when and where they want to engage ground or air targets.

Against air targets, the vehicle should be used as a traditional radar-guided SPAA system. Drivers may not want to advance too far in the thinly armoured ZA-35, but it is near your teammates that you will be able to provide the best air cover. The ideal engagement distance for enemy planes tends to be around 1.5 km to 2 km. Waiting for enemy planes to close in can be dangerous but is ideal to ensure a successful attack. The system may struggle to track a low, fast target, so waiting to engage until too late is not ideal if the driver is relying on the tracking system.

Despite lacking the APDS belts of its contemporaries, the ZA-35 can also perform well against enemy ground targets. The 35 mm AP belts are best utilized at close range, where they can penetrate even the lower sides of Soviet medium tanks. Softer targets will be destroyed very quickly. The Rooikat chassis allows the ZA-35 to quickly move in and out of the battle zone and surprise enemies from the side or rear. The vehicle is not easy to hide, but lowering the radar mast will at least make it slightly harder to spot.

In Arcade mode, the ZA-35 can be used as a dedicated light tank destroyer, as it is far easier for aircraft to dodge its shots, but it still can achieve the ridiculous 90 km/h offroad while firing its weapons and outspeeding practically any other light tank, allowing it to flank across the map or even to strafe entire tank squads without being hit. In general, any lightly armoured tank ranging from BMP-1 and up to Dardo, which are spawned in overabundance at this BR range, disintegrate if the ZA-35 fired at their turret for longer than 1 second, while it can take a lot of shots, unless enemy immediately fires at its turret as well, making it the best anti light tank the British can have. It also can be used to flank medium tank campers, as most NATO tanks have problems with surviving any kind of side shots. Even the radar mast can be used as a tool to taunt enemy medium tanks and to bait shots, if necessary.

The ZA-35 was a South African self-propelled anti-aircraft gun (SPAAG) variant of the Rooikat armoured car and designed in the 1990s. It was developed by Armaments Corporation of South Africa (ARMSCOR) and one prototype or possibly more was built before the project was cancelled. Had it entered production the ZA-35 would have served in a battery of three ZA-35 SPAAGs, one ZA-HVM surface-to-air missile launcher (also based on the Rooikat hull), and a local warning radar.[1]

The hull was a standard Rooikat hull but the turret was a completely new design by LEW. It has a crew of 3 with the driver in the hull and the commander and gunner in the turret. The armament consisted of two 35 mm M-35 automatic guns produced by Lyttleton Engineering. The guns have a rate of fire of 550 rounds per minute which is a 1,100 rpm combined rate of fire. Ammunition carried is of two types: HE-FRAG rounds for air targets and AP-I rounds for ground targets. A total of 920 rounds was carried in four belts of 230 rounds (two belts for each gun). The computerized fire control system (FCS) was linked to a fully stabilized gunner's sight with an integrated laser rangefinder. An EDR 110 search and tracking radar was fitted for finding and tracking enemy aircraft, mounted on a mast that could be raised five metres in order to get the radar clear of obstacles low to the ground. The ZA-35 can effectively eliminate targets during both day and night conditions. The armour protects against small arms fire and shrapnel all around and 23 mm projectiles over the frontal arc. Propulsion is provided by a rear 563 horsepower engine, allowing the 34 tons vehicle to reach a speed of 120 km/h.[1][2]