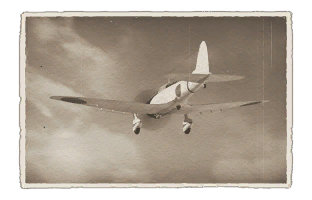 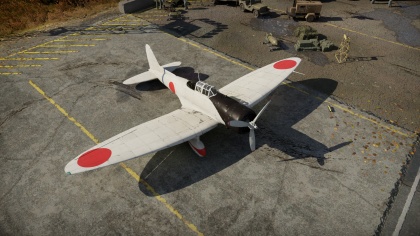 The D3A1 is a rank I Japanese dive bomber with a battle rating of 1.3 (AB/RB/SB). It has been in the game since the start of the Open Beta Test prior to Update 1.27.

The D3A is a highly manoeuvrable but lightly armed dive bomber. It is very capable of pulling off some rather drastic defensive manoeuvres when under attack. Once the bombs have been dropped, it can give many of the fighters it faces a run for their money in dog-fighting.

This agility comes at a cost, however. The D3A is not nearly as sturdy and therefore cannot take much punishment. It also is rather lightly armed, with the relatively ineffectual Japanese 7.7 mm machine guns and a bomb load of only one 250 kg under fuselage bomb with two 60 kg light bombs under the wings. It must be said, however, that this is more or less sufficient against the biplanes and light vehicles that it usually faces at its battle rating.

The D3A1 can be outfitted with the following ordnance:

The D3A1 is defended by:

When flying the D3A1, extra caution should be taken around planes equipped with 12.7 mm M2 Browning Heavy Machine Guns and/or cannons. Those planes will easily shred you because of their firepower. The D3A1 does not like to take battle damage and a short burst from any of those planes will cripple your plane if not destroy it outright.

Also, Spitfires are another enemy plane to be feared because even though the D3A1 is manoeuvrable, the Spitfire will easily outmanoeuvre you as well as outrun and outclimb you.

When battling the D3A1, do not fear its firepower as it's relatively weak. Always remember the D3A1 is extremely manoeuvrable so apply Boom and Zoom tactics if the D3A1 attempts to dogfight with you.

The single-engine carrier-based Aichi D3A dive bomber, a metal-construction monoplane, was created by order of Japan’s Supreme Command of Naval Aviation to replace the obsolete D1A biplane. The shape of the wing and tail, as well as the presence of special dive brake flaps, came from the German aircraft company Heinkel, which was in active partnership with Aichi.

A D3A prototype was ready in late 1937, and mass production of the D3A1 began in 1940. A Kinsey 43 engine producing 1000 horsepower was used, and the aircraft’s armament consisted of two synchronous 7.7 mm machine guns over the engine and one hand-operated machine gun with the radio operator at the rear of the cab. The wings had folding wingtips and duralumin sheeting, and the ailerons and flaps were covered with fabric.

During the first half of the Second World War, the D3A, along with the B5N Kate, were the main strike force of the Japanese fleet. At the time the D3A1 could be considered one of the best dive-bombers in the world. No other dive bomber had characteristics that were even close, until the arrival of the American Dauntless and Helldiver.