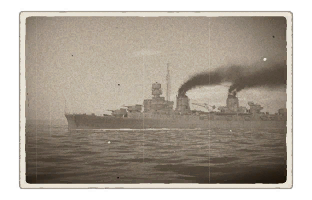 The Attilio Regolo,Capitani Romani type is a rank III Italian light cruiser with a battle rating of 5.0 (AB/RB/SB). It was introduced in Update "Starfighters".

The Attilio Regolo lacks substantial armour opting to use the lack of weight to improve the speed of the ship, this leaves areas such as the engines, ammo, and Bridge susceptible to damage from shells as small as destroyers. However the front of the turrets are protected by 20mm of armour, while the sides and roof are protected by 6 mm of armour. This use of small armour allows the turrets to not be splashed by destroyers high explosive rounds, but direct hits will disable the ships armament. The bridge is also surrounded by 15 mm of armour, which is not reliable in protecting the module. The greatest threat to the survivability of the ship is the exposed torpedoes on the middle of the deck, when hit they will quickly incapacitate the ship, removing the use of almost every module past the bridge, if the player can disengage from combat the ship can be recovered with at best a little over half the crew, but if it happens in the middle of a fight the ship will almost always be unrecoverable from fire, and eventually, flooding.

With a max speed of 72 km/h, the Attilio Regolo is tied with the Raimondo Montecuccoli as the fastest cruiser currently in the game. This impressive speed allows the ship to navigate towards advantageous positions before its adversaries.

The 8 135 mm/45 O.T.O Mod. 1938 are divided into 4 turrets allowing the ship to use at least half of its armament at any angle. The HE Dirompente is underwhelming with only 23 mm of pen at any angle, and an explosive mass of 1.8 kg. This shell is unreliable and should be avoided after the APHEBC Perforante and the HE-TF Contro-aerea shells are unlocked. The APHEBC Perforante is the most reliable shell used on the Attilio Regolo with a penetration of 174 mm at 1,000 m, and an explosive mass of 1.47 kg. The HE-TF Contro-aerea shell shares almost all of its characteristics with the HE Dirompente, but has a time fuse added to it for use as an AA shell; with its versatility as an anti-air shell and as a normal HE shell, this is the second most reliable shell to have.