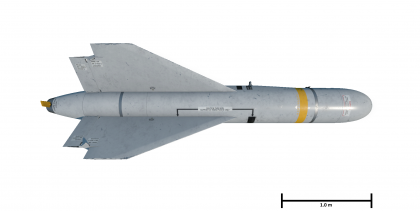 The AGM-62A Walleye I ER guided bomb (scale is approximate)

The AGM-62A Walleye I ER is an American guided bomb for aircraft use. It is one of the first guided bombs introduced into War Thunder in Update "Ground Breaking".

The Walleye is physically large, as big as a the 2,000 lb LDGP Mk 84 bomb. This is due to the guidance system in the ordnance, with the explosive amount more analogous to a 1,000 lb bomb. In fact, while its appearance and Tri-Service missile designation (AGM-62) makes the Walleye seem like a missile, that's actually a misnomer as it's unpowered (simply gliding itself to the locked target using guidance avionics, like all other guided bombs).

As mentioned earlier, the explosive amount in the Walleye is closer to equivalent to the 1,000 lb LDGP Mk 83 bomb. The Walleye contains a TNT equivalent of 264.36 kg in its warhead, compared to the LDGP Mk 83's 272.43 kg TNT equivalent. However, its combat utility can be much higher than a LDGP Mk 83 due to the TV guidance in the Walleye, allowing precise targeting of ground targets from a high-altitude.

The AGM-62A has a TV guidance sensor similar to the AGM-65B missile. It's most effective against ground targets, with the guidance system allowing the bomb to target both static and moving targets due to its tracking ability after a lock. However, an issue with the AGM-62A is that it can be difficult to discern whether the AGM-62A locked onto the vehicle or just the ground, which would leave one wondering if the lock is on the vehicle (in which case the guidance system will track it if moving), or just the ground where it will not adjust for the moving target. This is especially problematic in ground realistic battles if the AGM-62A is trying to lock onto a static target and it moves after release (as there is no way to verify whether the lock was made on the target or on the ground).

During Ground Realistic Battles, it is important to check whether the enemy has SAM units present. SAMs are a big threat to players trying to utilize the AGM-62A, as in a SAM heavy environment the launching aircraft will likely get shot down by the time it: gets to a proper release altitude and speed, found a target, and then dropped it. SAMs and radar-guided AAA may even destroy a falling AGM-62A if they spot it due to the bomb's slow moving, predictable nature.

Some considerations when spawning with a AGM-62A loadout. First, if the battle is a night battle the AGM-62's sensors cannot lock onto anything and so their capabilities are useless (choose a different, non-Walleye loadout during the night). Second, set the bomb fuse to "0.0s" on Walleye loadouts to make sure the bomb will explode once it hits the ground, as there is no purpose for a precision-guided bomb to have a delay after landing.