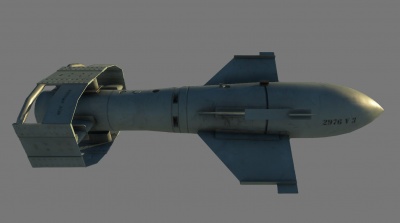 The Fritz-X is a guided armour-piercing gliding bomb weighing circa 1.5 tons, with an explosive payload of 320 kg. It was equipped with a stabilizer and fins as well as a set of radio equipment. The bomb trajectory could be tracked visually from the launching bomber through the bomb sight (bright tracing lights lit up in the tail section of the bomb after launch) and corrected by radio signal using a special joystick. It was mainly used as an anti-ship weapon.